Four years ago, Susan and I toured Jordan for the first time. Through the internet, I hired a driver/tour guide based on an ad from a Jordan tour company. This driver, Mazen, met us at the airport holding a sign with our names on it. Spending hours together with him in the car that first year, we became close friends with Mazen. We have hired him as our tour guide during our three subsequent Jordan visits. Mazen has invited us to his house twice for dinner with him and his wife. Both he and his wife speak enough English to get to know each other well enough to cement our friendship.

This year, we crossed into Jordan from the Israeli city of Eilat across from the Jordanian city of Aqaba at the head of the Red Sea. We arranged for Mazen to drive down to Aqaba from his home in Amman to take some friends of ours on a day tour to the fabulous historic ruins of Petra, which I’ve visited twice before on previous visits.

For Susan and me, the sightseeing highlight of this year’s Jordan visit was our overnight trip in the desert reserve area called Wadi Rum. Mazen had taken us there for a short jeep trip on our drive to Aqaba last year. Since then, it had been my goal to visit Wadi Rum again, to stay overnight in a Bedouin tent camp.

Susan’s minimum requirement was running water and a toilet. Mazen chose a moderately priced camp for us, in between the more primitive ones and the expensive luxurious ones (with marble toilets and fine Egyptian sheets). Each tent had a shower as well. However, the “running water” was cold as hell. In fact, the overnight temperature was unseasonably cold, close to freezing. Eventually, we were able to sleep comfortably under the numerous blankets provided. However, our friend Mary, who was traveling with us, was cold all night alone in her tent. The cold desert air showed a brilliant starry sky as bright as any we’ve seen before. Only the stars visible from the big island of Hawaii were better, because the weather was warmer. 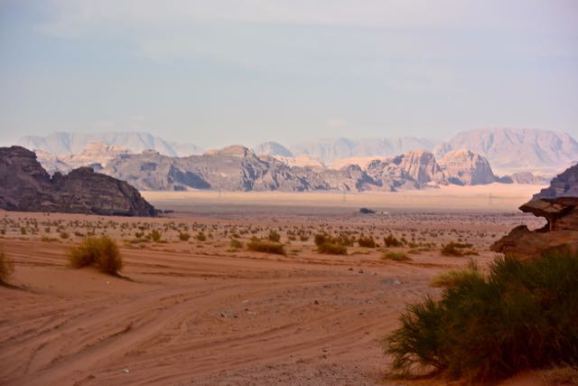 The camp had a capacity for at least four hundred visitors. But February is the off-season, and there were only eleven overnight guests on our night there. At dinnertime, there was a busload of Swedish tourists who joined us for the traditional Jordanian Bedouin dinner, followed by Jordanian dancing. The tour guide for the group was Hungarian, and he spoke quite good Swedish (though perhaps not quite as good as mine, ha ha…). The Swedish group left in their bus after the meal.

What made the meal uniquely Bedouin was the manner of its preparation. A wood fire was built in a buried barrel open at ground level. Once the fire had burned down to glowing ashes, the food—rice, meat, and vegetables–was placed in a wire frame and suspended above the glowing coals. The barrel was then closed at the top, covered with sand, and left to cook slowly for several hours. At mealtime, with great ceremony, the sand was shoveled away, the food was lifted out of the barrel in its cage, and carried piping hot to the table to be served.

One highlight of our Wadi Rum trip was a camel ride. Mazen arranged for Susan, Mary, and me to be taken on a desert camel walk, led by the Sudanese camel driver who walked leading the three of us on his camels tethered together. (All the camel drivers in Wadi Rum are from Sudan, North Africa.) Camels are such amazing animals! They were more comfortable to ride than horses are. 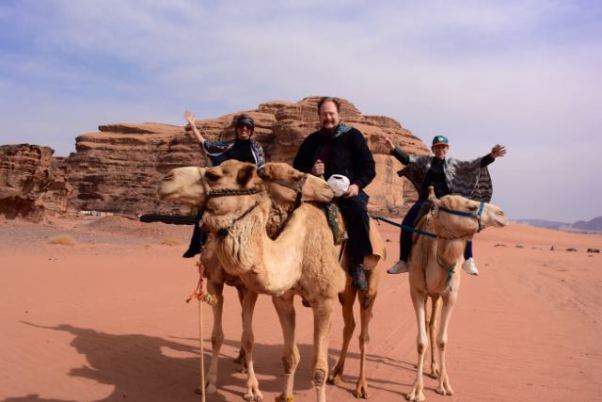 Wadi Rum’s landscape is similar to that of Southern Utah and Northern Arizona. The red rock formations are similar. There is even a natural arch formation somewhere in Wadi Rum. It is shown in the photo brochures, though we didn’t see it on our tour. One difference from Utah and Arizona is that there is a sea of sand that surrounds the rugged mountains. During the numerous windstorms, the sand shifts and often “climbs” the mountains, being blown high up against the mountain sides.

Following our overnight excursion to Wadi Rum, Mazen brought us back to Aqaba, approximately a two-hour drive. Since we still had several hours of daylight, Mazen took us to the Aqaba aquarium, followed by a sunset boat trip on the Red Sea.

Since Mazen has been a tour guide for many years, he seemed to know somebody everywhere we went. He also negotiated very reasonable prices for all aspects of our excursions. And so, we were happy to generously tip him at the end of his services. There’s no way we could have arranged so many activities at such low prices without his assistance and translations from Arabic to English.