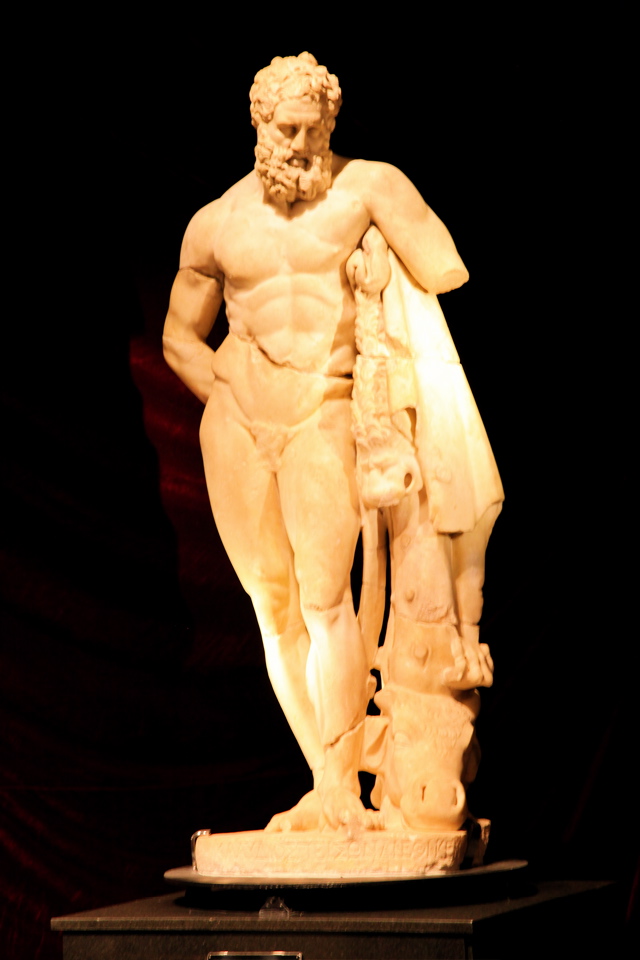 Our Turkish tour guide, Mehmet, has a college degree in English literature.  His spent his

military service working as a translator.  Obviously, his English language skills are outstanding.  Having been a tourist guide for twenty years, he has visited these Turkish historical sites hundreds of times.  Thus, he has refined his narratives over the years to be immensely content-rich, historically informative, and culturally aware.  Therefore, besides my own reading and observations, much of the information I will recount in this blog is derived from what I’ve learned from Mehmet’s daily cultural and historical descriptions.

Let me begin by stating my take-away conclusion from this tour:  I’m very impressed with Turkey.  I’m impressed with its history, its cuisine, its people, its high standard of living, and the tremendous modern development visible around the country.  Prior to the trip, I had my stereotypical reservations about visiting a Moslem country.  Having previously visited (during the safe times of my youth) Iran, Afghanistan, Pakistan, and India (which has 100 million Moslems, making it the world’s second largest Moslem country after Indonesia), there is a certain palpable feeling of oppression when women are veiled, when males are aggressive, when other religions are oppressed.  Turkey does not feel oppressive in any of these ways.  It is a democracy.  The women are totally free.  To be in Turkey feels like being in Spain or Italy, with the calls to prayer from the mosque being scarcely acknowledged on the streets, any more than when the bells ring in Europe’s cathedrals.

Turkey’s history is rich and tragic.  The land now called Turkey was ruled by, among others, the Hittites, the Persians, the Greeks, and the Romans.  After Turkey lost World War One, leading to the fall of the Ottoman Empire, Turkey was dragged culturally toward Europe by its leader, Kamal Ataturk (who face is on Turkish one Lira coins).  Ataturk outlawed the custom of women wearing the veil.  He changed Turkish written script from Arabic to Latin style.  He founded a tradition of secular government in which the military was standing behind the government to crush any resistance to Ataturk’s policies.

Turkey is the only Moslem nation that is a member of NATO.  The US worked hard to form a strong military alliance with Turkey to counter the (former) Soviet Union, which always hoped to achieve a warm water port by assimilating Turkey into the USSR.  During the last decade, there was a move for Turkey to join the European Union.  Ultimately, that movement failed, mainly because of opposition based on Turkey being Moslem, and therefore at odds with “Christian” Europe.  Mehmet’s insight was that the opposition to Turkey joining the EU was on historical and religious grounds, rather than being based on any aspect of the current Turkish government.

Turkey has a population of 77 million people.  Sixty percent of that population is under age forty.  Thus, Turkey is poised to undergo a great increase in population, which will make it larger than Germany, Europe’s most populous country.  Because Turkey’s banks were not part of the American-European financial fiasco of 2008, it did not experience any increase in unemployment during the current Western recession.  Housing development is huge, visible in every city.  Turkey is second highest in the world, after China, in the consumption of concrete for new building projects.

Mehmet told us that only one third of Turkey’s population is practicing/devout Moslem.  The more fundamentalist Moslems tend to live in the rural and Eastern part of the country, which is closer physically and culturally to Iran, Iraq, Syria, etc.  Much has been made in the Western press about the fact that Turkey’s current government’s main party is “Islamist.”  The fears being expressed in the West are that an Islamist government will somehow morph into a theocracy that oppresses women and other religions.  Mehmet thinks that this fear is overblown.  (He himself is a secular, i.e. non-practicing Moslem.)   He says that women’s literacy has actually increased since the Islamist government came to power.  Turkey’s almost century-long secular tradition cannot be reversed through one election.

The Islamist party won the election on a platform of bringing Moslem symbols and values back into the government, to counter the current entrenched secularism.  This is identical to, to coin a term, the “Christianist” American politicians that have the exact same goals for the USA.  It’s true that since the Islamists came to power, more women are wearing scarves and veils.  But no one is required to.  In the areas we’ve traveled in, the Turkish women wear stylish clothes, smoke cigarettes, and act liberated in every visible way.  I wish the Christianists were as tolerant as the Islamists.  It’s not enough for the Christianists to not have abortions or use birth control themselves.  They want to impose their religious values by law on everyone, regardless of the others’ religion or lack thereof.

There is a solar-powered water heater on practically every home in Turkey!  There are thousands of them, on apartment buildings, on mosques, on commercial buildings, lined up on the top of high-rises, etc.  The units consist of two tanks (hot & cold water storage?) coupled with two solar panels.   Obviously, due to this technology’s wide distribution throughout the country, economy of scale has reduced the price of the technology such that it is cheaper to use solar power to provide hot water than to use traditional electric water heaters.  I would love to see this type of practical application of solar energy take hold in the USA.  If such a localized and practical use of solar energy can be implemented in Turkey, why not in the USA?  Here are a number of photos, which I snapped mostly from the moving bus. 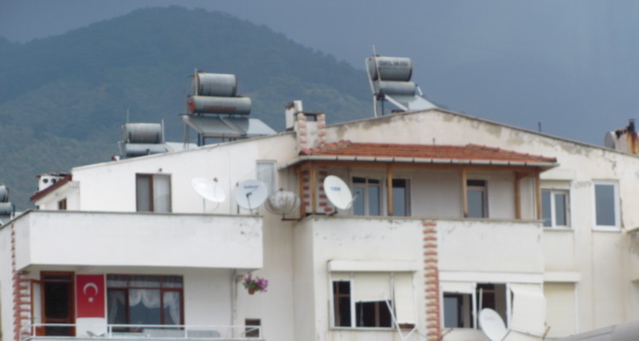 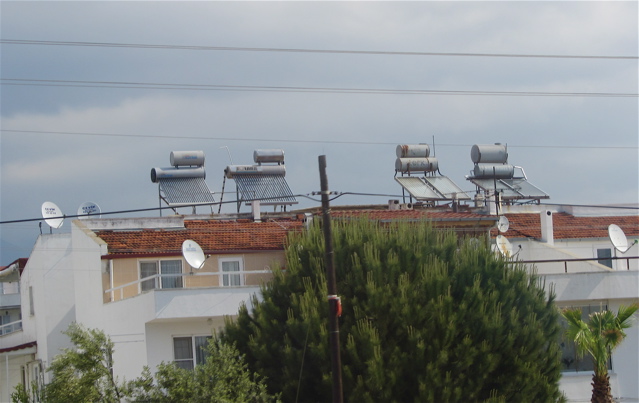 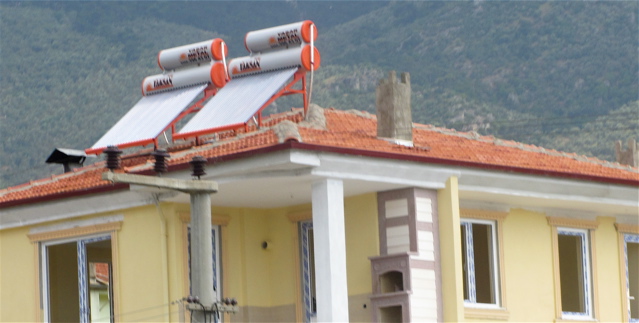 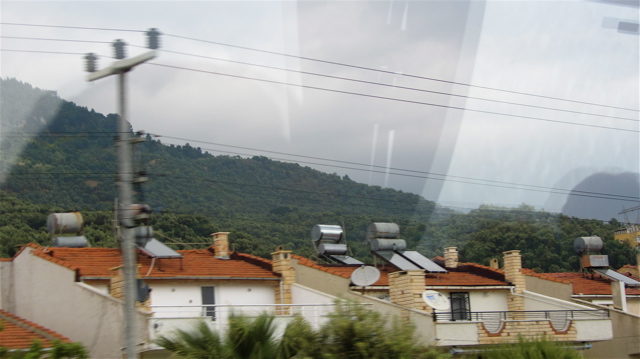