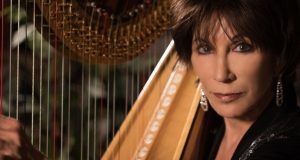 I always wonder if where I studied matters now.  So many years ago…but, I know that it is not so much the nitty-gritty details as it is what influenced who I am today and how I express my identity through my instrument.I was born in Detroit, Michigan, prior to Motown, but not prior to Elvis, the Beatles, and the Detroit Symphony.

I began my harp studies at Cass Technical High School at the age of 13 and my love of music was classical.  Cass Tech was and is a technical high school in downtown Detroit with one of the most advanced an exciting music departments in the country.  Alice Coltrane, Dorothy Ashby, Kenny Burrell, Ron Brown, and other notable jazz musicians studied at Cass.   However, I was a beginner and to this day, I think classical studies are the way to gain technical control over any instrument.

I moved on to study music at Wayne State University (WSU) with Elyze Ilku, who was at the time principal harpist with the Detroit Symphony. It was during my undergraduate studies that my relationship to the harp and musical career began to take form.

Stanford and onto Jazz

After graduating from WSU ,  I was awarded a graduate fellowship at Stanford University.  I received a Master of Arts degree in Music within the first year, but my craving to perform was greater than my interest in academic studies.  Through a strange set of circumstances, I got a job playing at a restaurant in Palo Alto, which is where I was able to free myself from the chains of classical study and move into jazz and pop.

It was a major leap for me to move across the musical divide to jazz and popular music – especially at a time when the harp was not easily accepted as a legitimate instrument for any music other than symphonic.  By this time I had performed with the Detroit Symphony, studied in Italy, performed with the English Ballet, and still wanted more.  The idea that the instrument would control my legitimacy as a jazz musician was frustrating.

I met Dorothy Ashby as we both studied with the same teacher and went to Cass…more than anything, she opened my mind to other styles.  However, not until after Stanford did I begin to find my own voice and expression.

While in San Francisco, I became well known in the Bay area as a top jazz harpist. I played there for 12 years until I began performing at Harrah’s in Lake Tahoe. During my long tenure there, I performed as a soloist with such noted artists as Frank Sinatra, Sammy Davis Jr., Julio Iglesias, Loretta Lynn, John Denver, and others.

The harp is gorgeous, but can it swing?

In an effort to set a new standard for excellence and artistry as a harpist in the contemporary instrumental jazz and pop music genres, I ventured into technological realm of amplification.

The electro-acoustic harp is an acoustic concert grand harp that is amplified with whatever technology is available.  However, when Lyon and Healy decided to develop amplification for the harp to be built into the instrument, I was able to apply my experience and knowledge in its design.  The result is a new instrument, enhancing the stunning sensitivity of the harp with extraordinary depth and clarity.  I authored the first technical manual for the instrument, which serves as a guide in both using the instrument and adapting classical technique to this new world of sound and performance.

The major amazing characteristic of my sound is the bass, which came from my craving that rhythm and sound of the upright and electric bass so critical to jazz.  Yes, I experimented with all the effects that attract guitar and keyboard players.  However, at this point, just having the organic sound the harp, the 6′ bass strings, and its dynamic potential is enough!  Needlesstosay, as you listen, know that the bass is the harp!

I’ve been on the faculty of Harpfest, international pop and jazz harp festival, for many years and am equally known for my stylistic expansion of the harp into jazz improvisation and composition. I’m the only jazz harpist to ever perform at the famous Village Vanguard in New York City, where I played with jazz pianist Ahmad Jamal.  Ahmad influences my music to this day!

Bringing both classical virtuosity and jazz fluidity to my music, I’ve been  George Benson, guitarist and vocalist, casually referred to me as the “Charlie Parker of the harp.”  However,  in my opinion, I am not Charlie Parker, but a cross between Bill Evans, Keith Jarret, and Ahmad Jamal!!  Regardless, I hope in your listening, the music is more important in your experience than the instrument!

This year, 2018, I performed in India at the National Center for the Performing Arts, the first jazz harpist to perform in Mumbai.  Also, in Stockholm.   Great fun and wonderful to expand my own sense of what is possible.

Note: My doctorate is in Human and Organizational Development, a field inspired and supportive to the work we now do in healthcare.  Take a look at the links below.  This recording was done following my completion of my doctoral studies.  A celebration and reconnection to the source of my music.