Statistics say that Qatar is the richest country in the world measured by per capita income for its citizens (approx. 185,000).  That does not apply to Qatar’s total population of approximately two million.  Of that two million, 1.8 million are immigrant laborers.  I’m not sure that we ever met an actual Qatari during our three days there.  Our two day healthcare workshop was attended by Indian, Philipine, Cuban, and various Arab nurses.  The nursing administrators were Canadian.  None of the workers were Qatari.

The Qatari men wear beautiful long white robes, while the women are completely veiled in black.  Porsche SUV’s were a popular auto choice.  The architecture was spectacular, the most innovative collection of skyscrapers I’ve ever seen.  (Shanghai and Dubai have similar innovative architecture, but I’ve never visited those cities.)  Qatar’s amazing standard of living is financed by the world’s insatiable thirst for oil, of which Qatar is well endowed.  America’s gas guzzlers contribute a large percentage of the income of several Arab oil producers. 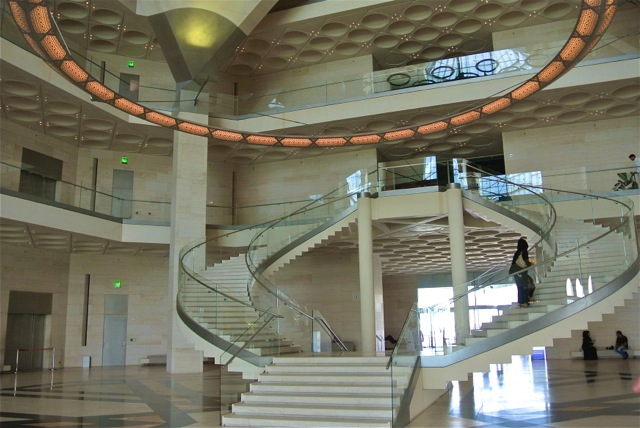 On the day we arrived from Jordan, I had the opportunity to visit Doha’s Islamic Art Museum.  Viewing the fantastic artworks was a history lesson in itself.  One was reminded of the dominance of Muslim cultures in science and the arts through the first half of the last millennium.  The European renaissance was inspired by the best of Islamic science and arts.  Am I the only one to sense that Islamic culture peaked five hundred years ago and has been in decline ever since?  When I expressed that thought to a friend visiting the museum with me, he opined that Qatar, Dubai, and Abu Dhabi are leading the resurgence of the Moslem world exemplified by their architecture.  Jordan’s and Qatar’s efforts to create world-class healthcare systems are another example.

All Qatari citizens have free healthcare from a government awash in petro-dollars.  As Qatar expands the capacity of its healthcare system, they will require all employers to pay health insurance premiums for all their immigrant workers.  Projected in 2014, when the healthcare system expansion is complete, health insurance fees will be built in to all tourist visa fees, such that every person in Qatar, including citizens, guest workers, and tourists, will be covered by healthcare insurance.  I find this to be a fair and elegant way of assuring that healthcare is available to all.

Obamacare created a gaping healthcare coverage loophole when it specified that employers with less than fifty employees would not have to provide their employees with health insurance.  This two-tiered system creates a disparity between large and small businesses, as well as leaving thousands of workers without employer healthcare coverage.  In my opinion, this highlights the need for a single-payer system that will separate insurance coverage from the necessity of working for a large company (under current regulations) or the inherent hazard of working for a small company that currently bears no responsibility for providing healthcare to its employees.  This employer-based healthcare system was flawed from its beginnings during the second world war.  It was instituted at a time of full employment when both life expectancies and healthcare costs were much lower.

Times have changed, and most people recognize the need for healthcare reform.  Our American for-profit system has resulted in everyone paying twice as much as other countries for often sub-standard care, while one sixth of the population has no access to care beyond the emergency room.  There would be plenty of money to provide healthcare for all if the system were reformed to remove the profit motivation that leads to expensive and unnecessary procedures and care.

The conflicts inherent in efforts to reform America’s bloated sick-care treatment system has created an incentive for countries such as Jordan, Qatar, India, Thailand, Singapore, and others, to expand their medical tourism development, in order to attract foreign patients who cannot afford the high price of healthcare in their home countries.  We live in a small world with a global economy.  A global healthcare system is developing, supported by technology with allows any medical records to be sent instantly anywhere in the world.  Thus, it is gratifying to be part of Dr. Jean Watson’s work to spread her Caring Science practice to nurses around the world.  Ultimately, as other countries develop their state-of-the-art care facilities, our C.A.R.E. Channel should be an integral part of the environment of care.