February 2015: If I am counting correctly, this is my fourteenth visit to India, starting the first time in 1971, again in 1982 & 1983, again in 2002, and finally practically every years since 2005 on tour with Mynta. It is very gratifying to have made so many great friends here, that my social calendar is filled with trying to connect with everybody. This year’s Mynta tour was cut short due to a lack of bookings. However, we managed to have absolutely one of the best concerts of our career at a three-day festival in the city of Pune, a three hour drive from Mumbai. The Mynta guys returned to Sweden after only four days here. But the consensus among them was that it was worth the long trip just because that one concert was so awesome.

I had planned all along to arrive a few days before and stay after the Mynta tour. So with the Mynta tour cut short, I found myself with more time to attend some great concerts as well as play in some quickly arranged concerts of my own. The quality of my visit here is, of course, dependent on the hospitality and friendship of various people here. I have some wonderful connections here that I hope to nurture forever.

When not in Pune, I’ve been staying with guitarist Ravi Iyer. We just met for the first time a year ago, playing one concert together in Mumbai last year. He managed to visit us in Reno this past summer. We played a concert for an Indian festival in the San Francisco area, and he got a good tourist’s view of Lake Tahoe and Yosemite. This week we’re playing a concert together at a small private venue managed by another relatively new friend, Dee Wood.

Dee Wood, originally from New York, has lived in Mumbai for thirty years or so. He was married to an Indian lady, with whom he has a daughter, but they are now divorced. Dee and I became instant friends two years ago, because he a music fanatic like me, and we seem to have so many Indian acquaintances in common. Dee will play the bass guitar with Ravi and myself, and we will be joined in the concert by Fazal Qureshi, Mynta’s longtime tabla-drum virtuoso. Additionally, Dee has set up two jazz-evenings for me to play with some local musicians, whom I will meet tomorrow afternoon for the first time in advance of our concert tomorrow evening.

I’ve been sharing with all my American musician friends, that I’m very impressed with the level of musicianship here. The percussionists/drummers are especially outstanding. The three-day festival in Pune was billed as a percussion festival. As such, there were several featured drum solos (including traditional drum sets, tablas, and South Indian drums) in between the performances of larger ensembles, such as Mynta. It was impossible to say that any one drummer was “the best”, they were all so good.

Returning to Mumbai after four days in Pune, I was just in time for the annual concert festival celebrating the life and music of Alla Rakha, the tabla player who accompanied sitarist Ravi Shankar for many years. Alla Rakha’s son, Zakir Hussain, is currently perhaps India’s most famous musician. Fazal Qureshi is the middle son. Zakir has formed groups with virtuoso Western musicians such as English guitarist John McLaughlin and American banjo player Bela Fleck. He also accompanies all the major Indian classical artists.

Zakir arranges a US tour every two years for a varying assembly of musicians called the Masters of Percussion Tour. Fazal has been part of several of those tours, and he invited Susan and me to attend his most recent concert with MOP at the Zellerbach Auditorium in Berkeley, California. The Alla Rakha festival concert began at 6:30am and lasted until 10pm that evening. There were breaks between the various musical segments which each featured many different and varied musicians. It was an amazing marathon for Zakir, who played fantastically with every single artist, while entertaining the audience with his charming introductions and witty asides, maintaining his incredible energy over the eighteen hours that the concert spanned. I was exhausted just from attending and listening. I’m quite certain Zakir slept in the following day…at least I hope so.

On the evening following the marathon concert, I attended another special pairing of sitarist Nayan Ghosh and tabla player Swapan Chaudhuri. I met Nayan on my first arrival in India in 1971. He was fourteen at the time. (I was 22.) Upon entering his father’s music school, there was a large painting of his uncle, the great bansuri (bamboo flute) pioneer Panallal Ghosh. Nayan’s father, Nikhil Ghosh, played tabla on all his brother’s recordings. He was also the tabla-guru of my German friend, Gert Wegner, with whom I made that first overland trip from Europe to India, across Turkey, Iran, Afghanistan, and Pakistan. That route is not possible today. So Nikhil Ghosh is the one person most responsible for introducing me to Indian music, my continuing life-long passion.

Swapan Chaudhuri is the tabla teacher at the Ali Akbar College of Music. He is also a professor at the California Institute of the Arts in Southern California. He has been in my house in Reno twice, to record an album with sarodist and friend George Ruckert. Swapan received a well-deserved lifetime achievement award at the percussion festival in Pune. So it was a treat for me to see and hear him twice here within a couple of days.

It is a wonderful experience for me to be able to just think about music and get into really good practice. Playing music regularly for several hours a day does wonders for my fluency and technique. I don’t have to “warm up.” I can just pick up an instrument after having played the day before and execute difficult passages relatively effortlessly. All my musical friends here are full-time musicians. So everybody is practicing every day and in good shape. There are just so many distractions in Reno…leading Healing Healthcare Systems with Susan, managing all the day-to-day activities of a household and all the social relationships that take time and energy. I’m not complaining. It’s just that these India tours remind me of the time several decades ago, before getting married, before founding a company, when all I did was practice and look for musical opportunities. In both 1982 and 1983, I spent six weeks in India both years, playing gigs and working in the film industry, playing for Bollywood soundtracks. R. D. Burman is the big name producer I worked for.

I’ve mentioned before that coming on tour to India with Mynta would have been the perfect gig for me in my thirties. Well, three decades later in my sixties, it’s still fun. And it reminds me so much of my thirties, that I’m happy to continue these annual musical tours as long as possible. I have a five-year Indian business visa that expires in 2018, so I’ve got to keep it up at least through that year.

The photos below show just a few of the artistic renderings of the instruction for any overtaking vehicle to blow their horn.  A former saxophonist member of Mynta went on to lead his own group, called Horn Please! 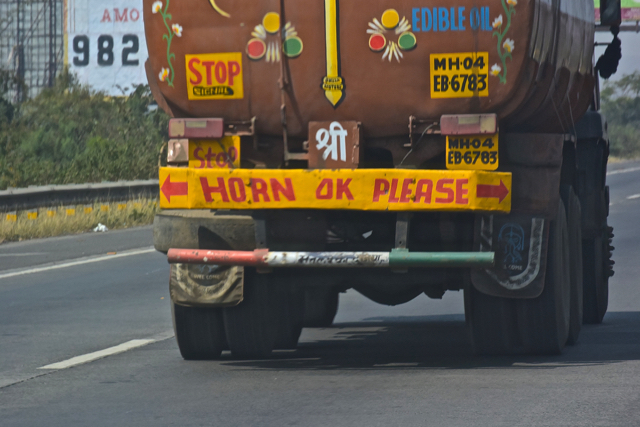 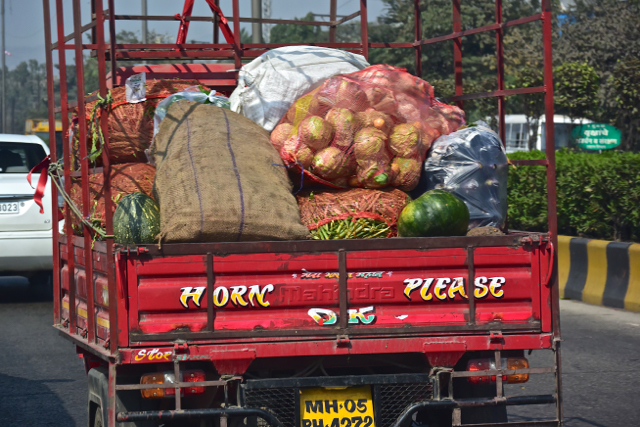 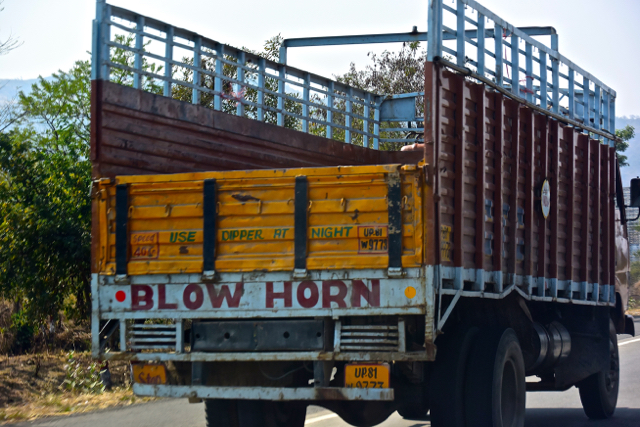 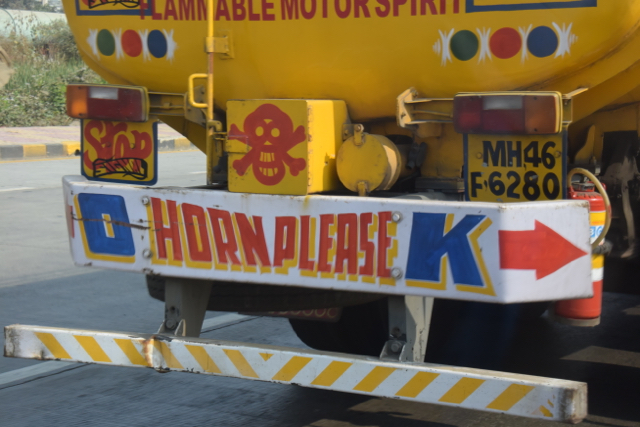 http://www.mazerandsmith.com
Sex and Drugs in Amsterdam
What It Means to be Really Poor in India