“The World’s Most Beautiful Voyage”

That’s how the promo booklet is titled which we received upon boarding our Hurtigruten cruise ship, The Trollfjord.  Our total cruise will last eleven days.  On the map, I count thirty-two ports in each direction where the ship will stop (weather permitting) as we sail from Bergen northward to Kirkenes and southward back to Bergen.  Some stops are as short as a quarter hour, while larger cities warrant stops of several hours.

Line consists of a fleet of approximately a dozen ships, which sail daily from the major port of Bergen to the northern and easternmost Norwegian port of Kirkenes, which lies only ten miles from the Russian border.  One doesn’t think of Norway, a country of only five million people, as covering such a large area.  However, the westernmost part of Norway lies on a longitude in line with Amsterdam, while Kirkenes lies east of Istanbul.  The northern border of Norway is farther north than the top of Alaska.  Luckily, due to the Gulf Stream, Norway’s temperature is considerably warmer than any other country at a similar latitude.

The Hurtigruten line was founded in the late 1800’s as a way for merchants to connect the isolated fishing villages on the northern coast with markets for their fish in cities to the south.  Later, the ships served as a part of Norway’s defense structure, in effect patrolling the entire coastline.  They delivered mail prior to the modern railroads and highways being built.  They still serve as an auto ferry, a means of transporting freight, and a practical “sea taxi” for Norwegians living in the many small towns up and down the coast.  In recent years, Hurtigruten upgraded their ships to accommodate foreign tourists at a comfort level competitive with international tourist cruise lines.  Thus on a daily basis, Hurtigruten now serves international travelers, along with local Norwegian travelers, and freight clients.

For five years starting in the late eighties, Susan and I worked as entertainers on Royal Viking Lines, a Norwegian-flagged commercial cruise line.  We enjoyed getting paid for performing while getting the opportunity to travel through the Panama Canal, as well as to South America, Tahiti, New Zealand, Australia, Bali, Singapore, Hawaii, Alaska, and ports in between.  It took us almost two decades before we were willing to pay for taking a cruise as passengers.  When we finally took our first cruise as passengers, from our favorite destination, Alaska, through the Canadian Inside Passage to Vancouver, we met some of the same entertainers on the Celebrity Cruise ship that we used to work with on Royal Viking Lines.  The only other cruise that we had taken, prior to this one, was the one-way segment southbound on Hurtigruten in 2009.  Thus, it is a testament to how great this cruise is that we would choose to take it again in 2014.  We are joined by fellow travelers, our longtime friends Bill and Linn from Georgia, with whom we have traveled to other destinations before.

We chose this time of year (March) in part because of the possibility of seeing the Aurora Borealis (Northern Lights).  So far, we have not been so lucky.  The weather has been mostly cloudy for the first half of the cruise, preventing viewing of the light show, even if it had occurred.  Unfortunately, the Northern Lights are unpredictable.  They are only visible sporadically in extreme northern latitudes.  They are caused by solar flares erupting from the surface of the sun, which send streams of radiation, which strike the earth. These solar rays are channeled to the poles of the rotating earth by its magnetic field.  The interaction between the solar rays and earth’s magnetic field causes shimmering sheets of light to occasionally decorate the skies.  If we’re lucky, we might witness them before the end of this cruise.

Nonetheless, the cruise is very satisfying, whether or not we’re lucky enough to see the Northern Lights.  The atmosphere is very relaxed.  Some land excursions are offered at some of the ports.  But the daily activity level, in terms of organized activities, is much mellower than other more typical tourist cruises.  There is a minimum of entertainment, unlike regular tourist cruises.  On our cruise, the only entertainers are a lovely couple from Rumania, both excellent singers, with the husband playing the keyboard accompaniment.  In anticipation of sitting in with whomever the musicians might be, I brought along my flute and clarinet (my most easily portable instruments).  I have joined the couple so far on several evenings for a set of music.  I enjoy playing, but at the same time, it’s nice not to be obligated to work the full evening from eight to midnight, as these musicians are required to do.

I also brought my video camera along, in the hopes that I will be able to capture some nature images for our CARE Channel.  It was grey and rainy during the first few days of the trip.  Above the Arctic Circle, that rain turned into snow.  On the sixth day of the cruise, we finally had a little sunshine, which enabled me to shoot some video for the first time.  Norway (and most of Europe) has been experiencing an unusual lack of snow this year, similar to California and Nevada.  It was shocking, during the first few days of the cruise, to see very little snow on the mountains.  After the snowstorms of the last several days, all the mountains are now totally white.  I need more sunshine to capture on video the dramatic landscapes visible from the ship all along this mountainous coastline.

The cruise has been very educational in terms of learning Norway’s history.  During World War II, Norway was occupied by hundreds of thousands of German troops, who were positioned in northern Norway in order to eventually attack the large port of Murmansk in Russia, and to mount an eventual invasion of the British Isles.  The Allies (Russia, Britain, and the US) mounted hundreds of bombing raids on the Germans occupying Norway.  Eventually, as it became clear to Hitler that Germany was losing the war, he withdrew his troops south to defend the motherland.  But on their way out of Norway, Hitler ordered the total destruction of every structure in Northern Norway.  Tens of thousands of Norwegians lost their homes and all their possessions.

Today, the Trollfjord stopped at the city of Hammarfest.  This city of ten thousand calls itself the “Northernmost City in the World.”  Here we visited a museum documenting the destruction and rebuilding of Norway during and after the war.  It was amazing to see photos of Hammarfest before the war, and after the war when the entire city was razed.  Not a single structure was left standing.  The retreating German army cut down and burned thirty-one thousand telephone poles, in effect isolating all the small towns from being able to communicate with the world, completely destroying the existing infrastructure.

It was interesting to read in the museum that reconstruction after the war was guided by a “culture of equality.”  This signified that it was a national priority to rebuild new homes for all those that had lost everything.  This is the same national value that provides healthcare for all as well as free university-level higher education.  This is a value present in Sweden as well.  When I toured with Mynta for many years, performing in very small towns’ community centers, I often heard the expression:  “We believe that everyone in Sweden deserves access to culture.  People who live in rural areas should not be deprived just because of where they live.  After all, Sweden needs people willing to live in rural areas, to perform forestry and agricultural work, which supports the people living in our cities.”

Seeing the tangible results of the Scandinavian “culture of equality” in action, it makes our saying that “All men are created equal” seem like an empty phrase.  Of course, when Jefferson wrote these words in the Declaration of Independence, he wasn’t applying this sentiment to women, blacks, or Native Americans.  Some Americans look down on Scandinavia’s culture of equality because it doesn’t produce as many multi-millionaires as America does.  However, it doesn’t allow the extreme chronic poverty to exist that we allow in the states.  Also, the values are applied to all, not just citizens.  While I support the general goal of Obamacare (the Affordable Care Act) to make healthcare available to all, one of the first compromises to pass this weak law was to exclude all immigrants from its benefits. 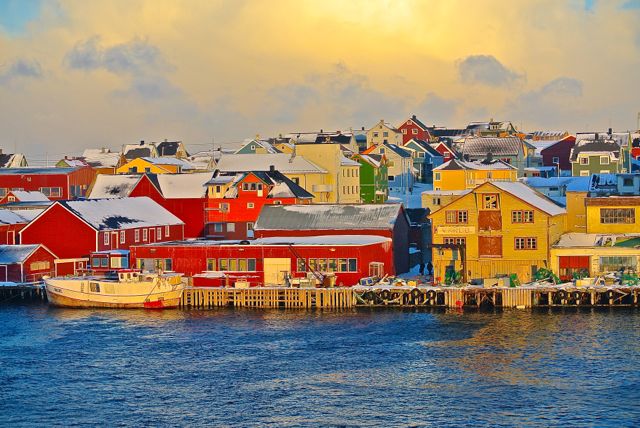 While the American civil rights movement succeeded in providing blacks with access to restaurants, hotels, schools, banking, and other institutions previously restricted to whites, immigrants (so-called illegal/undocumented) are kept in the permanent underclass status, performing the worst-paid menial jobs, with no practical pathway to become “legal.”  Nonetheless, most of the undocumented immigrants find this tenuous existence preferable to hopelessness in their home countries.  Building a “Berlin Wall” fence between Mexico and the US will not solve the problem of the twelve million (estimated) immigrants already working in the states.  Expelling those twelve million would be the largest ethnic cleansing in world history.  That’s not going to happen.  While there is talk of immigration “reform,” our polarized politics will probably postpone meaningful reform for years.   The US could benefit greatly from studying how Scandinavia makes the benefits of modern institutions (such as healthcare and education) available to all, and to the great benefit of all who live here.

http://www.mazerandsmith.com
Norway: Cruising up the Coast
Norway: Life Above the Arctic Circle