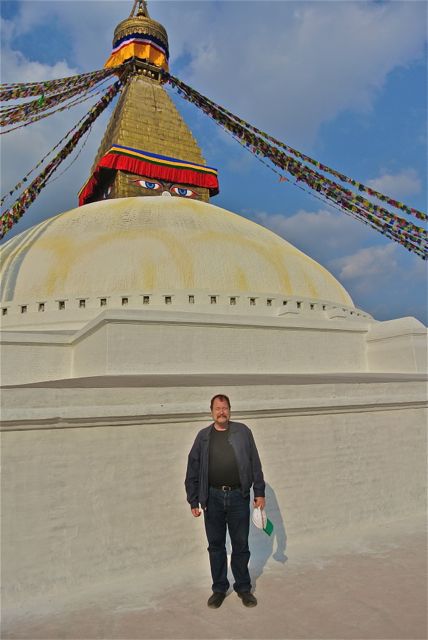 Flying from Mumbai to Katmandu is only two and a half hours by air.  But Nepal is a different country with a different culture and history.  Historically, Nepal, unlike India, was never conquered and colonized by the British.  Thus the Nepalese culture reflects continuity with the original culture of the Indian sub-continent, of which Buddhism plays a major role.  Nepal is home to many Tibetan refugees who fled their homeland from the Chinese.  There are very few Moslems compared with India.  Nepal’s mountainous landscape protected it from invasion by the British (or any other country).  But the lingering effect is that Nepal is very poor and undeveloped.  India, by comparison, is much more developed, rich, and modern.

I asked a Nepali what religion he was, and he answered “Hindu and Buddhist.”  Buddha was born in Nepal and died in India.  His birthplace is a pilgrimage spot for Buddhists, similar to Mecca for Moslems.  Buddha lived approximately 2500 years ago, born into the Hindu culture which dates back 5000 years.  Buddha was born into a royal family and lived the first thirty years of his life in the royal palace.  But seeking more, at some point he disguised himself as a commoner and slipped out of the palace for the first time in his life.  During this journey, he encountered a sick man and a dead man, things he had never experienced before.  He obviously empathized with the common man, renouncing his wealth, and living the rest of his life under a vow of poverty, seeking the “path to enlightenment.”  This path meant overcoming attachments

” which might keep a person stuck in their life.  It meant controlling one’s desires through meditation and contemplation, without being seduced by material temptations.  Buddha supposedly attained enlightenment by the end of his life.  And so, a religion was born.

Followers of Buddha worship him as a god.  Yet Buddha never claimed to be a god.  Rather, his life was a model for the search for enlightenment.  Thus, anyone following his path can claim to be a Buddhist while at the same time being Hindu, Christian, Jew, or any other religion.  Certainly all religions have their particular paths to enlightenment, sometimes involving rituals, prayers, service to others, and specific beliefs.  Buddhism, as practiced by the Nepalis and Tibetans is relatively peaceful compared to most other religions, which create conflicts and battles over their sense of exclusive “rightness” to the exclusion of other belief systems.  Buddhism seems more tolerant of the existence

of “many paths to enlightenment.”

I visited Nepal twice previously, in 1983 and 2002.  Unfortunately, the quality of life in the capital city of Katmandu, with its several million inhabitants, has gotten worse.  The air quality was very bad, partly a result of the fact that the Katmandu valley holds the pollution from cars and factories with no wind to “clear the air.”  Nepal is forced to purchase electricity from neighboring India.  The electrical grid is awful, resulting in rolling blackouts, with power only on in the capital about half the time.  Hotels

have generators that they turn on when the power goes out in the evening.  The power was off every morning I was there.  Restaurants manage to function by cooking with gas.  Small businesses have kerosene lanterns.  Christian and I had the surreal experience of walking a

couple of miles back to our hotel through city streets after dark, with the roads illuminated only by passing car lights.

Winter is the dry season, and the rivers are low.  Unfortunately, the rivers in Katmandu are the catch-all sewers for every type of human waste, from garbage to excrement.  But as in India, poor migrants from the countryside live in huts on the banks next to the river, despite its overpowering stench.

But on the positive side, Katmandu contains incredible old temples, stupas, palaces, shrines, sculptures, and museums.  These are a constant reminder of Nepal’s rich cultural heritage.  People often ask me, how do I cope with so many poor people?  My answer, which applies equally to India and Nepal, is that even the people so materially poor are

very culturally rich, supported by their belief systems.  It’s no disgrace to be poor.  Buddha’s embrace of poverty was an act of extreme virtue.  There are many red-clothed monks in Katmandu.  I don’t know the differences between the different branches of Buddhism.  (Cambodian Buddhist monks wear orange, not red.)  From the museum, I learned that the evolution of Buddhism is very similar to Christianity, insofar as one branch wanted to proselytize to

spread the religion, even through force, while another branch promoted the ascetic lifestyle of renunciation of material things in order to concentrate on the spiritual.

One more enlightening experience concerned by good friend Danny who lived in Nepal for many years studying Indian music (which is the dominant classical art form in Nepal as well).  On

the very day that Danny was supposed to meet me at the airport, he was having an emergency angioplasty at the hospital in Katmandu.  He doesn’t have insurance.  But because he lived in Nepal for so long and speaks Nepali, he was able to go to a private hospital which specializes in cardiac care.  A stint was inserted to open a blocked blood vessel in his heart, by threading a narrow tube from his wrist

all the way into the heart.  Danny was totally conscious during the whole procedure, watching the same video screen as the cardiologist.  The operation was successful, and afterwards they even gave him a DVD of the procedure.  Danny was charged the Nepali price, as opposed to the foreigner’s price, which was, incredibly, only $4000!  The cost for angioplasty and two days in the ICU in the states would have been over $100,000.  Even in India, it would have cost only $8-10,000.  I recommend “medical tourism” to India or Nepal for any uninsured Americans needing expensive healthcare that they can’t otherwise afford at home.

My German friend Gert, with whom I made my first trip to India in 1971, has lived in the world-heritage town of Bhaktapur at least half the time for the last thirty years.  Unfortunately, he is arriving back in Nepal one week after I leave on this trip.  My previous trips in 1983 and 2002 were to visit Gert.  Even in Gert’s absence, I wanted to show Christian this incredible town, which lies about 20km from Katmandu and was the historic capital of the valley before the Gurkas from northern Nepal (three hundred years ago) conquered the valley and made Katmandu their capital.  Bhaktapur is famous for its woodworkers.  Craftsmen from Bhaktapur were imported to Tibet to work on the fantastic palace in

Llasa, which is the symbol of Tibetan Buddhism.  The people of Bhaktapur speak Newar, which is a different language from the more dominant standard Nepali.  Gert speaks Newar, but he says it’s a dying language because a written script was never developed for Newar.  (The Nepali language adopted Indian Hindi script for itself.)

On this day, the weather was perfect.  Christian and I had hired a taxi for the day to drive us there, and we walked around the town of 100,000 residents for a couple of hours.  I went to one of the scenic town squares where Susan and I had met and befriended a young Nepali girl, who was working as a street vendor on our visit in 2002.  We had lost touch with her, so

when we got to that square I started inquiring from everyone I could approach as to whether they knew Jamuna Lama.  Amazingly, I was connected to two young Nepali women who know Jamuna.  More amazingly, the older, now 29-year old woman, remembered our visit.  (She would have been eighteen at that time.)  I learned that Jamuna is now working together with her sister as a domestic helper in Turkmenistan.  My greetings

will eventually be conveyed to her.  It was very heartwarming to discover that this fleeting human connection made over a decade ago still endures.

After Bhaktapur, we returned to Katmandu to visit one of the most impressive Buddhist stupas (temples) in the world, called Bouda.  There are many Tibetan monks to be seen, as well as more commonly dressed people.  Tibetan facial features are clearly different from Nepalis, by looking rounder and more “Oriental.” We had a meal on a rooftop restaurant overlooking the flag-draped stupa.  There are traditional Tibetan prayer wheels surrounding the base of the stupa.  People circle the stupa in a clockwise direction (only), twirling the prayer wheels as they walk.  The whole scene seems so foreign and surreal, because it’s probably unique to Tibet, Nepal, and Darjeeling, India, the home of the Dalai Lama’s Tibetan exile government.

Finally, I’d like to comment on the clasped hand greeting of Hindus and Buddhists, which is the standard greeting accompanied by the word “Namaste!” which I understand to mean “I praise the god within you.”  Hindus and Buddhists recognize a pantheon of gods and goddesses, similar to the ancient Greeks and Romans, in which the gods act out their dramas with super powers but typical human emotions, such as devotion, jealousy, anger, envy, etc.  I appreciate the founding stories of Hinduism and Buddhism, just like I do the stories in the bible.  But I especially like the recognition of the divine presence in every living thing.  Also, music is regarded as an expression of divine energy, a manifestation of god.  Clasping one’s hands in greeting and saying Namaste cuts across all barriers and differences of race, class, nationality, wealth, or education level.  It’s a beautiful way to show reverence and respect for anyone you are meeting for the first time.  It’s one of the most appealing features of Hindu-Buddhist cultural expression.

http://www.mazerandsmith.com
India 2013: Rajastan and the Kumbhalgahr Fort
Nepal: Pokhara and the Himalayan Range

Leave a Reply to David Friedman