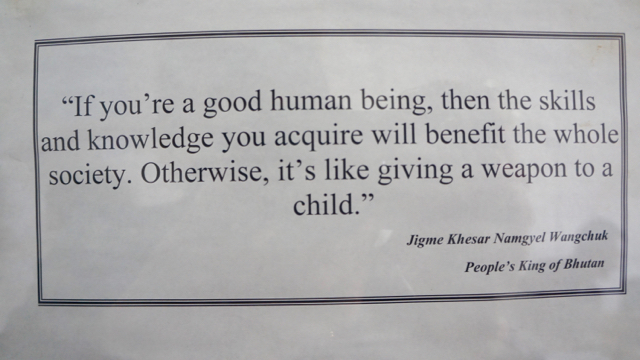 THE MAGICAL KINGDOM OF BHUTAN

How much can a tourist learn about a country in five days? First impressions count. One can draw conclusions from even a short visit that merit more research perhaps through a future visit.

Having just spent five days in Bhutan, my first impressions are very positive. Bhutan is a small Buddhist kingdom located north of India and easy of Nepal. It is in the Himalayan lowlands, a terrain of deep valleys leading up to the Himalayan range that separates it from Tibet and China to the north. Flying into Bhutan from Delhi, India, revealed the solid wall of Himalayan peaks including hundreds of peaks that have never been climbed, just because they’re not in the top-ten-highest-mountains list. Because of its geographic isolation, Bhutan was never conquered or colonized by any foreign power (unlike India, Bangla Desh, and Myanmar). Its population numbers only seven hundred thousand people, mostly Buddhists.

I’ve visited three other Buddhist majority nations: Sri Lanka, Cambodia, Thailand, and Myanmar. In comparison with other nations dominated by other religions, my general feeling is that Buddhist nations tend to be more peaceful, friendly and open, and less aggressive in their interactions with each other. This shows in their unguarded facial expressions, which might be evident in my photos of Bhutanese people. (It must be noted that Sri Lanka fought and conquered a Tamil/Hindu revolt in the Jaffa peninsula. And Myanmar has been in the news for its oppression of the Rohinga Muslim minority group. So Buddhists are not necessarily pacifists. They sometimes battle each other.)

Bhutan’s national sport is archery. In their first-ever Olympic competition in 2008, they earned the gold medal. In 2012, they earned silver. (Korea took the gold that year.) We were truly amazed to see an archer hit the center of the target from one hundred fifty meters away… over half again as long as a football field.

Bhutan became Buddhist as early as the eighth century. Some of its Buddhist monasteries date from the sixteenth century. Its various tribal fiefdoms were united into a cohesive nation in the nineteenth century. And it has had a hereditary ruler, a king, since the early twentieth century. The current king has very intentionally controlled the outside influences of modernization. Tourism is limited, but growing as part of its economy. Except for tourists from neighboring India, foreign tourists have to book and pay for their trip through registered travel agencies in order to receive an entrance visa. Susan and I had to pay $285/day/each for our visit, which is quite expensive for this part of the world. However, that fee covered all our hotels, meals, expert guide and driver to three different cities with places of interest.

Healthcare and education is free and available to all citizens! (not unlike Scandinavia) The king is very popular. In 2008, when the Arab Spring was beginning, the king abdicated from his total monarchical power in favor of a representative democracy, i.e. elections and a bi-cameral parliament! This is relatively unique in world history for a king to give up power of his own accord. He still controls the military (which is small) and sets national policies. His four tenets of good government are: (1) preserving culture and tradition, (2) equality under the law for all citizens, (3) protection of the natural environment, & (4) good/honest governance. He says, if the government can’t guarantee these things, why have any government at all?

There are no traffic lights in the entire country, only traffic circles and policemen directing traffic.

Perhaps the king’s most famous policy is his determination that rather than Bhutan trying to amass wealth and investment, that instead of trying to raise the Gross National Product, Bhutan should attempt to increase the Gross National Happiness. This unique expression of national values was recently emulated by the United Arab Emirates, who created their own minister of Gross National Happiness. However, the UAE is dominated by petroleum production and commerce, so the GNH is not likely to be nearly as important in the UAE as in Bhutan.

To implement the GNH and the goal of equality, servants are not permitted to the rich. Some land distribution was implemented to reduce landholdings of the rich and give land to poor farmers. The limit for buildings permitted for construction is six stories, so that no rich corporations may dominate the landscape with skyscrapers. Smoking is not permitted in public! I saw cigarettes for sale, but never saw anyone smoking!

Bhutan’s largest developing industry is developing hydroelectric power by dams using the plentiful runoff from the Himalayas. They sell their excess electric power to India. Bhutan reminds me a lot of Nepal. But the general standard of living is much higher, perhaps due as much as anything to Bhutan’s much lower population density. The mountains are stunning. Trekking is popular. The high hills and valleys reminded me very much of the national forest land in California which surrounds our Yosemite National Park.

The other main industry for Bhutan is tourism, supported by an industry of craftsmen and women producing a steady supply of Buddhist sculptures, paintings, carvings, and clothing. We toured the college for handicrafts education, which provides a six-year program for many young Bhutanese, who create products for sale in the retail tourist shops around the country. On the one hand, I don’t like the mass-produced nature of the handicrafts. But on the other hand, the level of artistry is high. The products are beautiful. And this is a terrific way to preserve the culture and provide income for the country by selling to tourists from around the world.

The places that Susan and I were shown by our guide will be shared through the accompanying photos. But there is one set of photos that deserves explanation: the reverence for the phallic symbol, the phallus, the penis. We didn’t buy any of the penis carvings available at many gift shops. Many houses have a phallus painted on the exterior wall (along with animals and other symbols). It was explained to us that the phallus represents fertility and as such, is painted in order to bring blessings and fertility to the household. Supposedly, the tradition was based on the life of an eccentric monk who defied convention and the established religious figures by celebrating sex and pleasure in general. Thus he became the symbol of hope for couples seeking to have a child. 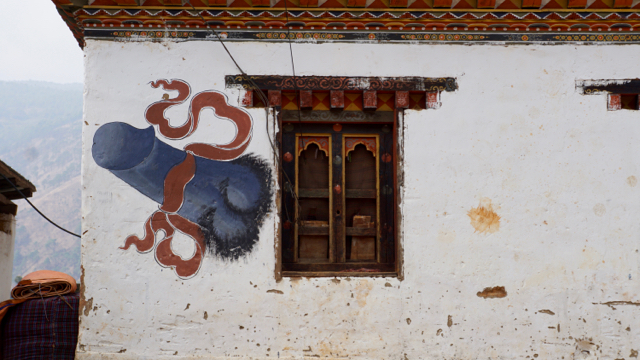 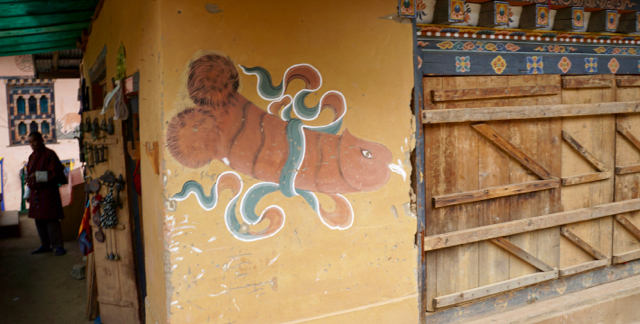 What were of great interest to me were the conversations with our guide Wangdi about his Buddhist religious beliefs and practice. We learned much about Buddhist religious beliefs through his explanations of the symbolism contained in the thangka paintings and sculptures, which are found in the traditional monasteries and fortresses, with faithful replicas for sale in souvenir shops.

Bhutanese Buddhists have a very active spiritual life, demonstrated by frequent prayers and the ubiquitous presence of religious symbols. But beyond prayers and meditation are beliefs in active spirits, both good and evil, present in everyday life and affecting our current events. It would be convenient to regard some of our politicians as simply being inhabited by evil spirits, which could be exorcised through prayer and meditation. 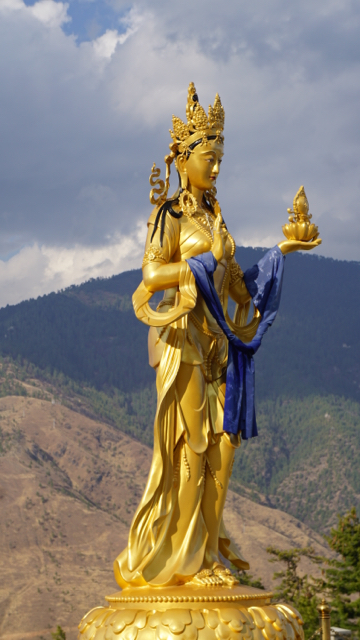 Most of you probably know that Buddhism was founded 2500 years ago when a sheltered royal prince left his father’s palace in disguise in his early thirties to experience the world. Outside the palace, he encountered an old man, a sick man, and a dead man. When it was explained to him that all men/women would go through these stages, his life work became to model a path to enlightenment that would free one from attachment, even attachment to life itself, to become self-realized and enlightened such as to escape the endless reincarnation cycle of birth, life, and death (a legacy of the 5000-year-old Hindu religion which was the culture in which he was born). The key point is that Buddha was a man who attained enlightenment. His followers have deified him. But as a man seeking enlightenment, there is no overt conflict with someone adopting Buddhist values within the context of the world’s other major religions. Certainly, Buddha would be regarded as a saint if he had been born into a Christian or Moslem culture. Because ultimately, the values of all religions are similar in terms of how we should live our lives. The conflicts arise from disparate dogmas, histories, and rituals.

Wangdi, our guide, expressed his belief that purity of mind, intention, and spirit, was the primary goal of religion, and that this striving for purity could and does occur within all religions. Under his Buddhist beliefs, the three poisons of the mind are Lust, Hate, and Ignorance. Freeing the mind from these poisons leads to the path toward enlightenment. I was struck by the relative simplicity and beauty of his beliefs. That is, there were no barriers to anyone living Buddhist values within any religious culture. This aligned with my personal standard of belief: I don’t care what someone believes. I just want to know how he/she treats someone who doesn’t believe the same way they do.