The 2018 American Nurses Credentialing Center (ANCC) Magnet Conference, which took place this year in Denver, Colorado, was the largest healthcare conference in the world with 10,000 nurses. The Magnet Conference celebrates hospitals achieving “magnet” status and recognizes the outstanding nurses working in them. This is the third year that I’ve attended the Magnet Conference. Though I’m not a nurse, being among so many people whose lives are dedicated to healing was a fantastic experience. Susan and I had six Healing Healthcare Systems staff members with us, introducing our CARE Channel and our new Virtual Reality experience, from our exhibit booth in the extensive trade show. Our staff reports having overwhelming interest from nurses working in hospitals around the country to add the C.A.R.E. Channel for their patients and families.  When we get back to the office, we will determine what proportion of Magnet hospitals have the CARE Channel. The large number of leads collected will undoubtedly increase our number of magnet hospital clients who use the CARE Channel. It was very gratifying to meet many nurses who use the CARE Channel every day with their patients as well as using it personally in their own hospitalizations. I searched the internet to learn the criteria that have to be met for a hospital to attain magnet status. The criteria are quite detailed, too lengthy to describe here. Less than one tenth of American hospitals are Magnet facilities. Several international hospitals were recognized, from the Middle and Far East, as well as the first European magnet hospital in Belgium. To kick off the conference opening extravaganza, the Denver Philharmonic was on stage. In a humorous introduction, it was pointed out that the players tune to 440hz (middle A), a “scientifically derived number,” whose adoption standardized and improved symphonic performances around the world = an “evidence-based” professional practice. Taking apart the first movement of Beethoven’s 5th symphony, the conductor conducted the brass section in a part of the movement in which they had rests, demonstrating that the brass section knew when to perform and otherwise when to hold back. It was all quite entertaining. Many outstanding individuals were recognized for their achievements. The opening speech was by a researcher-author Cy Wakeman. She has published research reporting that “drama” consumes an average of 2.3 hours of the average worker’s day. By drama, she means the distracting emotions, such as anger, frustration, intimidation, and disrespect, that waste time, reduce productivity, and undermine the best efforts of workers. She promotes “reality-based leadership” with the catchphrase, “Your ego is not your amigo.” www.realitybasedleadership.com.  Below are some of the ideas she discussed in her speech: 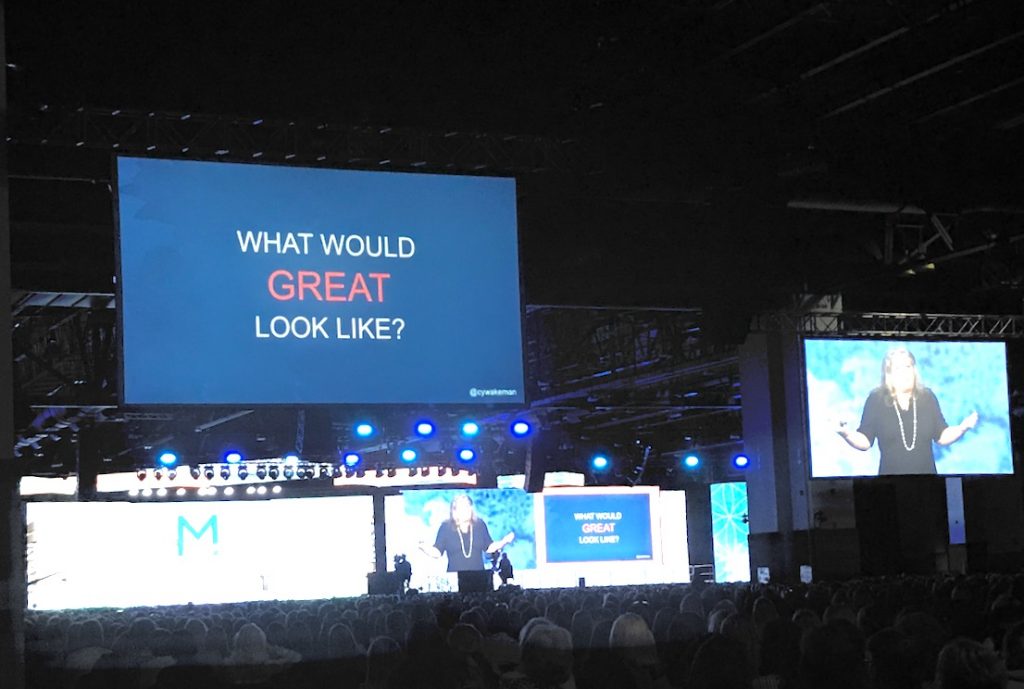 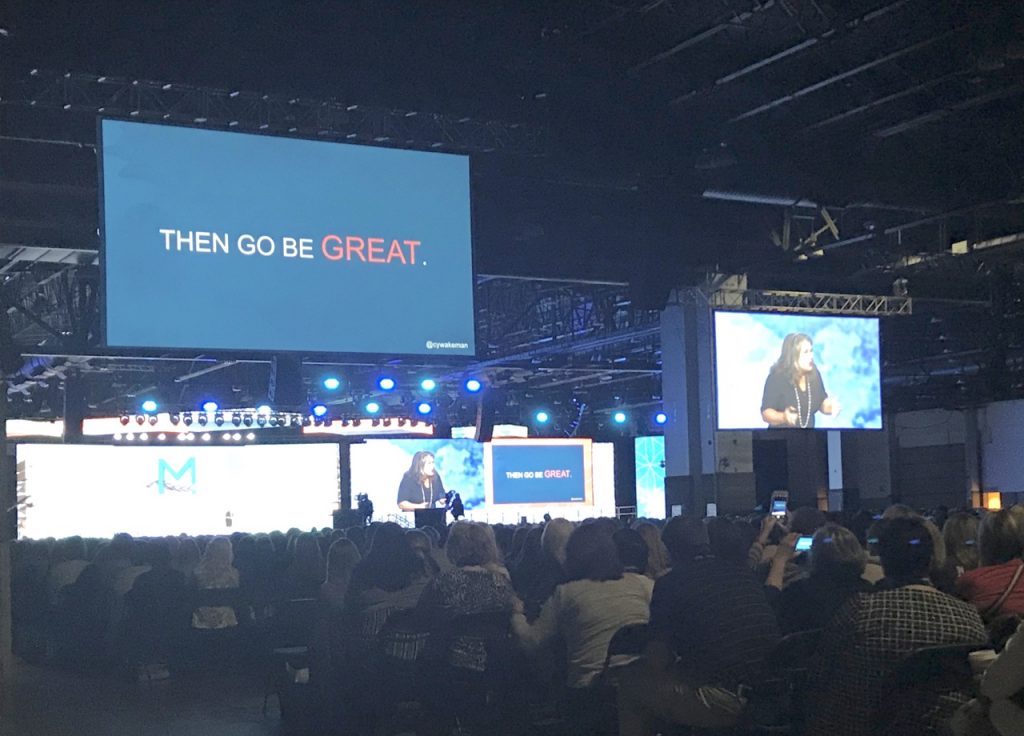 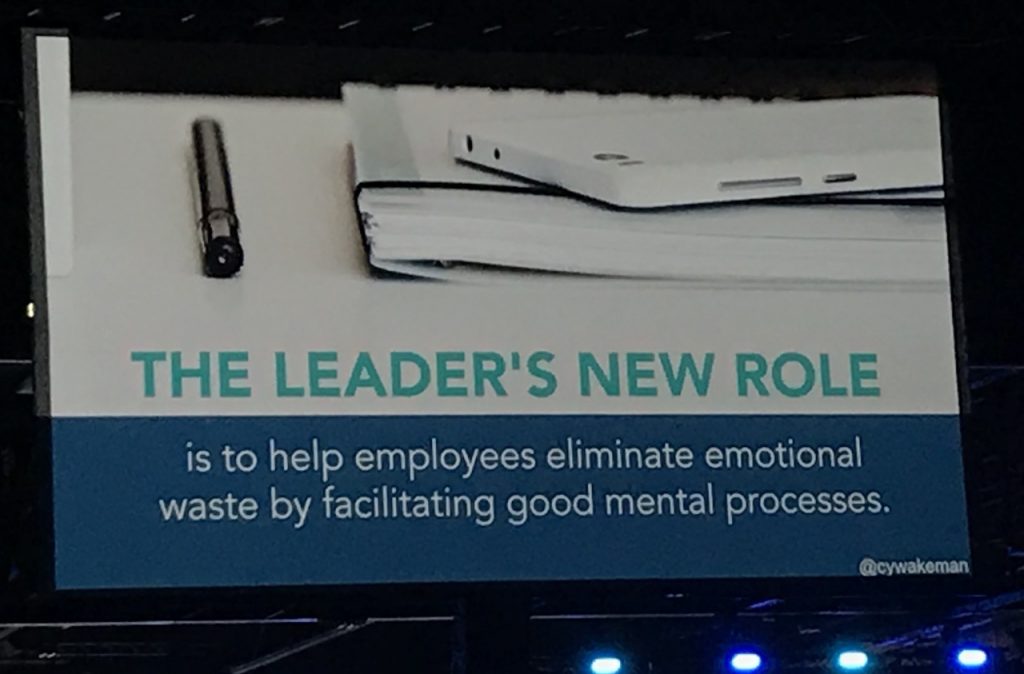 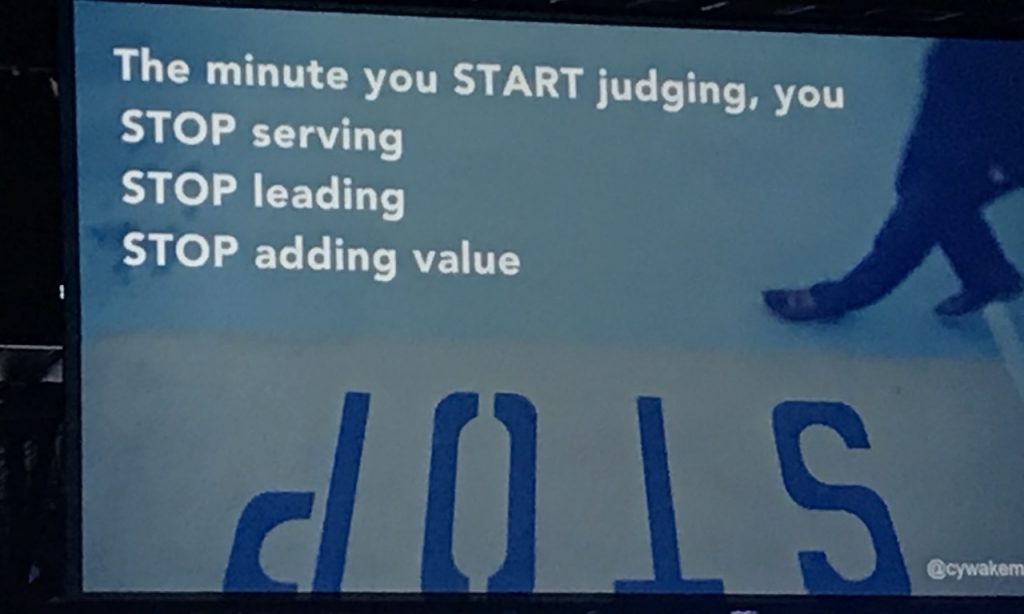 An African female nurse leader from Botswana, Sheila Dinotshe Tlou, was recognized for her work in promoting AIDS treatment and prevention, working against financial, political, and cultural barriers to success. But against these barriers, she achieved a great measure of success, truly saving many lives. Her honor acceptance speech ended with the challenge for everyone to join her in delivering healthcare to all by banishing the barriers of nationality and poverty. Each year a single hospital is honored as the most outstanding hospital, accompanied by a fifty thousand dollar prize. The prize this year went to a hospital in southern Vermont. Of particular benefit to our company was a video highlighting the prize-winning hospital’s pioneering use of virtual reality headsets in their cancer treatment infusion unit. The result of this publicity was evident in the increased interest at our trade show booth in the demonstration of our new VR 360-degree headset featuring nature videos. Virtual reality is an emerging technology that promises to increase in its use by hospitals to manage pain and for a positive distraction. Because our HHS videographers have been shooting 360-video for over two years, we are well positioned to have our content used by the early hospital adopters of this new technology. This is an exciting development for HHS. 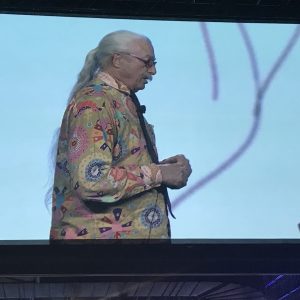 The featured speaker on the second day of the conference was Dr. Patch Adams. Patch is best known for the movie bearing his name in which his persona was played by Robin Williams. Susan and I had the pleasure of meeting Patch in a private setting almost twenty years ago, well before the movie which made him famous. From having met him, we can attest to the fact that Robin Williams was the perfect actor to play him. Patch uses humor as his tool to spread joy and healing, primarily by being outrageous in his clothing and behaviors and by making fun of people who take themselves too seriously. He believes that mental illnesses are caused by fear, isolation, and the absence of love, and should not be treated by drugs, but rather with love and caring. He claimed in his speech that he didn’t make any money from the movie that spotlighted his life and work. Nonetheless, he says that every day of his life has been a happy day. He travels around the world visiting hospitals, schools, and orphanages, putting on a clown’s nose, wearing strange clothes, and using a style of visual humor that transcends languages and nationalities. Patch Adams remains an enduring idealist, pursuing his life goals through his eccentric and uniquely personal style. One of the joys of conferences such as this one is to meet very interesting people. One such person was a man from Iceland, who was the medical director for a Dutch-Icelandic company which produces a revolutionary hardware device. A nurse can take a handful of diverse pills and capsules, place them in a tray, and within a few seconds the machine identifies and lists on a display screen the exact name and quantity of these medications. I had not been previously aware that every medication/pill/capsule has a unique size and form factor, which enables the machine to make its quick analysis. The goal is to reduce medication errors, reduce the time needed to document patients’ doses, and to instantly create a computer record of all medications dispensed by all nurses within the unit using this machine. The Magnet Conference offered the opportunity to meet our friend Dr. Jean Watson, an internationally recognized nurse theorist, whom we’ve had the pleasure of working with for many years. Next February, we will travel again to Aqaba, Jordan, for the sixth annual conference of Middle Eastern Nursing United in Human Caring. Dr. Watson sees nursing as a strong force for world peace, which is why she the conference takes place in Jordan, the only country that Palestinians can freely visit, since Israel, which controls the Palestinian territories, will not issue them passports. (Israel does not want to recognize the country of “Palestine,” nor to integrate the Palestinians into Israel as Israeli citizens.) 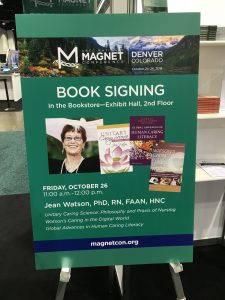 Dr. Watson bases her work on the worldview of unity and connectedness. Her theory of Caring Science is an interdisciplinary field of study grounded in the discipline of nursing and evolving field of nursing science. We are honored to have her as a friend and mentor. This paragraph of mine barely describes her work. Read more about Dr. Jean Watson at www.watsoncaringscience.org. The ten thousand nurses at the Magnet Conference gave me a very hopeful feeling about the future, in spite of the other deeply disturbing trends and events in the daily news. This outstanding group represents a collection of thousands of years of combined professional practice, who unite in service to patients of all ages and diagnoses. They work long hours every day in very stressful environments, surrounded by trauma, pain, and death (as well as the joys of new births). I have the utmost respect for their work. We know that thousands of patients around the country watch the CARE Channel every day. Many of these patients search for our company address and send us letters and notes expressing their appreciation. We share the letters with everyone in our office staff, so that every employee receives the praise and compliments, no matter what their individual jobs are within our company. We were the first twenty-four hour relaxation channel specifically for hospitals, and we know we are the best, in spite of the fact that we now have competition. My HHS colleagues and I will return to the office next week with satisfaction and confidence in the value and integrity of our work. I look forward to attending future Magnet Hospital conferences.
Share This Post