It’s impossible to visit Italy without being constantly reminded of its illustrious history.  Two thousand years ago, at the height of the Roman Empire, Italy was the center of the greatest empire and concentration of wealth, power, and learning that the world had ever known.  The conquering Romans left their marks from the British Isles across Europe into North Africa and into the Middle East.  Two thousand years later, the world continues to marvel at the impressive structures and the amazing sculptures that survived all these years.  Many of the streets of Verona (and doubtless other cities as well) are paved with exquisite ancient marble. 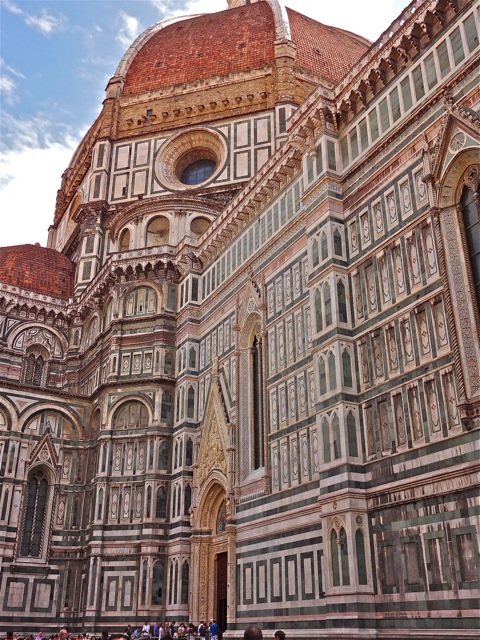 The Duomo, the medieval dome of Florence, constructed during the time of the Medici’s, Italy’s prosperous traders, was the largest dome in the world for several centuries and is still regarded as a marvel of architectural accomplishment.  Today, only the dome of the Vatican is bigger.  The whole building, inside and out, is designed with different colors of marble, artistically assembled.  Its only rival of comparable beauty is India’s Taj Mahal, which is constructed only of the white marble found in India, but embellishes its design with inlaid precious stones.

Italy continues to be a world leader in many fields.  It makes the world’s sportiest sports cars, e.g. Ferrari, Lamborghini, Alfa Romeo, etc.  Its role as the world’s fashion design leader is rivaled only by France.  Italians dress very well.  Men typically wear coats and ties.  The women seem to be always dressed up even if they’re just walking to the market.  Italian woodworking and furniture are amazing.  Italian leather goods are outstanding.  Italy’s refined jewelry designs continue centuries of tradition.  Its opera tradition is unrivaled.  The train system is outstanding, which I can attest to after having ridden it at least half a dozen times during the last week.  I’m sure there are other fields in which Italy is a world leader, but I just can’t think of them at this moment.

La Dolce Vita, “The Sweet Life”, the lifestyle for which Italy is famous.  What is it?  Do Italians have a monopoly on it?  Do all Italians enjoy this lifestyle?  Are there negative aspects inherent in this lifestyle?  Italy and Greece are currently Europe’s most financially troubled countries.  Both have been criticized for lifestyles in which their people supposedly are more interested in eating and drinking rather than working, when compared, for instance, with Germany’s work ethic.  Would Italy still be Italy if its people renounced the ideal of La Dolce Vita?  Our local hostess, Chiara, said that Italy’s financial problems are due primarily to the fact that the rich hide their money in the secret bank accounts of neighboring Switzerland and don’t pay taxes.  This sounds very familiar to the same issue in the US.

We discussed the meaning of La Dolce Vita while being shown the countryside surrounding Verona, including Brescia, Lago d’Isea, Lago d’Garda, and the Ca’del Bosco Winery.  Let me make clear from the outset that all of us consider ourselves to be very lucky in life.  First, we have good health.  We have good careers that we love.  And we live in beautiful parts of the world.  Is that enough to say that we all live La Dolce Vita?  Perhaps, but there are certain attitudes and beliefs, according to Chiara, that distinguish this Italian lifestyle from us happy Americans.

Chiara worked at a hospital in the US for two years.  She plans to go back later this year to continue her work there.  She is an outstanding medical researcher in the field of adult multiple sclerosis.  Her observation is that most Americans live to work.  That is, they define themselves and their worth as individuals according to their jobs.  This does not fit with La Dolce Vita.  She was appalled to meet people who believed that paying a little bit less in taxes was good, so that their tax money did not go to pay for somebody’s else’s healthcare.  This is definitely not La Dolce Vita.  (As a physician, dedicated to healing people, she believes that access to healthcare should be regarded as a basic human right.)

Chiara hosted an Italian dinner for some friends in the US.  To accompany the food she made, she special ordered some Ca’del Bosco wine, so that she could feel like she was “at home” at least for the evening.  The wine cost $60 for one bottle.  This was La Dolce Vita.  (Money doesn’t define it, but it helps!)

Chiara smokes a few cigarettes during the day, maybe four or five during the ten hours a day that we spent with her.  Susan and I reprimanded her, that as a doctor she should know better.  Her response was interesting.  She said, “Why do Americans look at cigarette smoke as the worst poison, when they are drinking Coca-Cola with one hand and eating McDonalds fast food with the other?  Don’t they know that this terrible American fast food is much worse than smoking a few cigarettes?”  But we persisted, that as a doctor, she knew for a fact that smoking tobacco was potentially harmful.  Her final comment…”My few cigarettes each day are part of La Dolce Vita.”

The landscape around the Northern Italian city of Verona is rich and beautiful.  It reminds us of California’s Napa Valley.  We drove the Strada del Vino, the Wine Highway, which is surrounded by vineyards and wineries.  Living standards are very high.  I didn’t see any poor people anywhere.  (In fact, I haven’t seen any poor people anywhere in Italy, so far.)  As we walked along the shore of Lago d’Garda, which is lined with charming villages and posh residences, Chiara pointed at a recliner-chair on an upstairs apartment deck overlooking the lake.  “That’s La Dolce Vita,” she said.  I replied, that down South where I grew up, people typically had rocking chairs and swings on the front porches of their houses…that this was our Southern American version of La Dolce Vita.

But Chiara doesn’t feel like Americans really appreciate this idealized Italian lifestyle.  According to Chiara’s observations, Americans work for more money, for more prestige, for more respect and power, for more possessions…not to live La Dolce Vita, independent of how much money we might earn, or how big our house is, whether we drive a new car, or how many people know and respect us.  In her Italian belief, La Dolce Vita is available to anyone, regardless of these external factors.  It’s a striving for satisfaction, beauty, peace, and personal fulfillment, which does not automatically follow from a high-paying job or a prestigious position or a fat bank account.

Ultimately, for me as an American, this concept of La Dolce Vita is very attractive and charming.  It warrants further research, which will require a future trip to Italy.