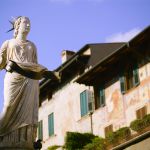 Our flight to Verona, Italy, took us via Denver and Frankfort, where I got to speak a little German.  The short flight from Frankfort to Verona took us over the Swiss ad Italian Alps.  It was easy to see that the Alps are younger mountains than the Rockies in the US, because they are more rugged, less rounded and softened by time and erosion.  Also, there was still a considerable amount of snow on them left over from last winter.  I thought I even saw a couple what looked like glaciers. 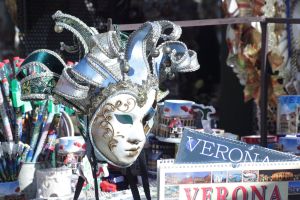 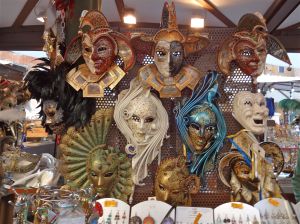 We arrived in Verona in the middle of the afternoon.  After checking into the hotel, we walked to the main plaza of the old city center.  Verona is a very old city, with evidence of settlements on the site dating back to prehistoric times.  It is perhaps best known as the setting for Shakespeare’s Romeo and Juliet.  The architecture of the city center has been preserved in the old style similar to that found in Venice. Walking down the old narrow alleyways, one feels like having stepped back in time a few centuries.

The photos below show a street magic act.  The lady posed for a long time (half an hour or more?) as if suspended in air.  I was told that there is a metal frame that extends from the post up her sleeve and providing a seat to “float” on. 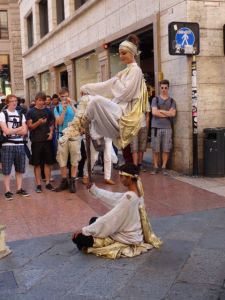 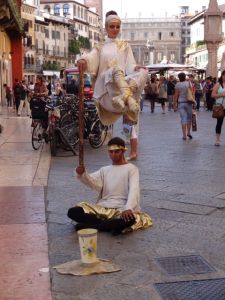 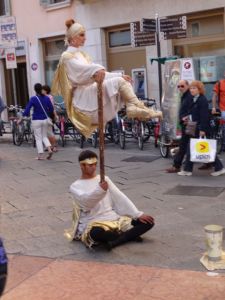 Some months ago Susan had met an Italian physician named Chiara, working at the Mayo Clinic in Minnesota.  Chiara is back in her hometown of Brescia, located a three-quarter-hour train ride from Verona.  We had planned for some time for Chiara to show us around the region.  However, on a week ago, she informed us that there was an international music therapy conference taking place in Brescia that she wanted us to attend (if we agreed, which we did).

And so, after a fitful night’s sleep due to jetlag, we were up early our first day, taking the 7:30am train from Verona to Brescia.  This short train journey reminded us that the public transportation in Italy (and Europe in general) is much better than in the states.  The lack of available mass transit in the US is what requires everyone to own a car, since there’s no way to get around unless one lives downtown in which case everything one needs is within walking distance.  Europe has the advantage that distances are relatively short and the population density is greater, which creates a greater need for the highly developed mass transit systems. 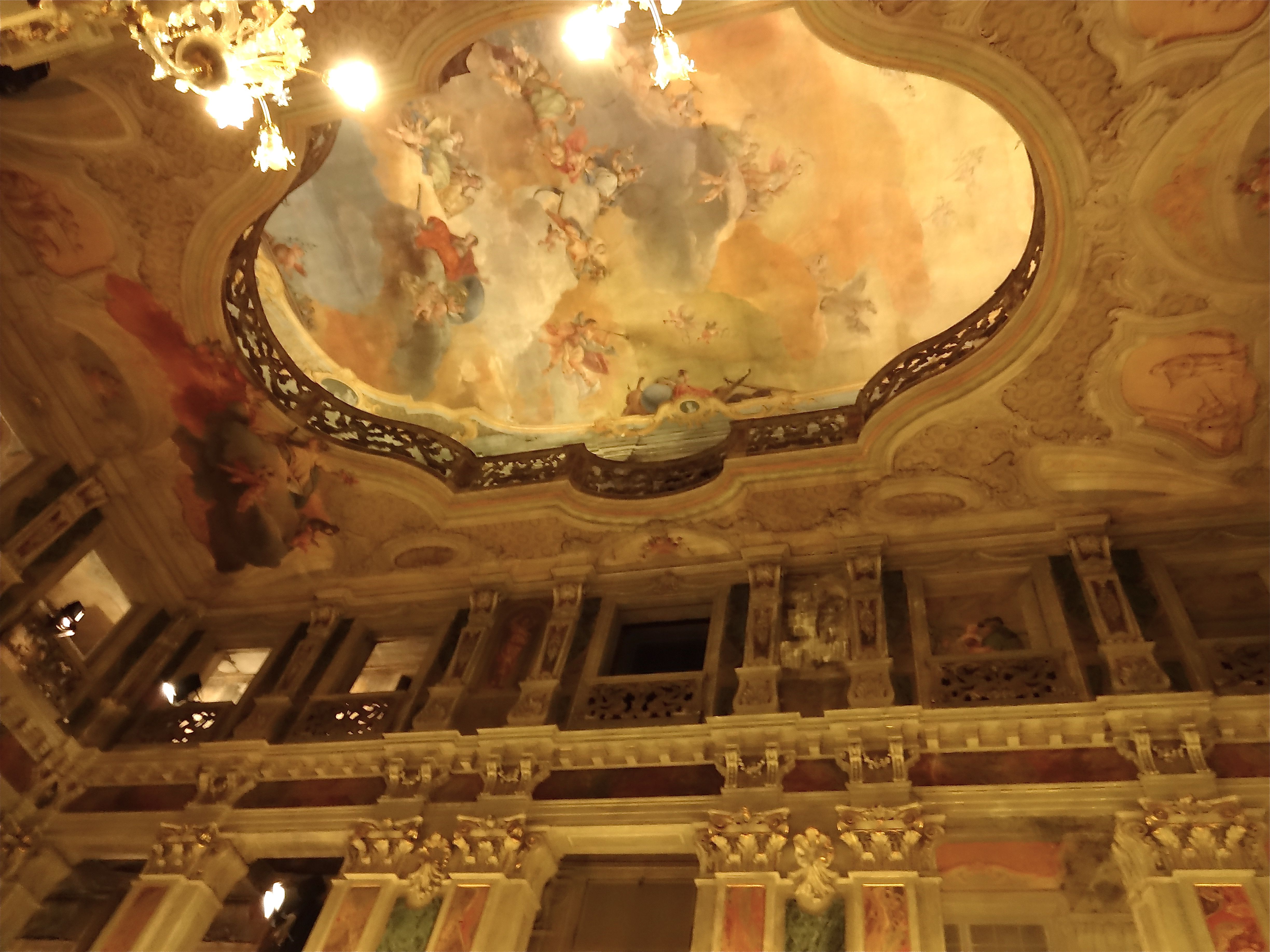 The conference took place in an ornate old palace ballroom, reminiscent of the Sistine Chapel, due to the artwork and sculptures covering the walls and ceiling.  The opening speaker was a professor from Colorado State University.  He gave an interesting history of music therapy, starting with Plato and Aristotle.  At that time, music study was the pathway to science, because of its mathematic and physical properties.  The study of music encompassed a study of time, an understanding of how sounds are created, with theories about the connection between the resonance of different notes corresponding to the orbits of the stars and planets, which gave rise to the phrase “music of the spheres.”

A more contemporary analysis of the values of studying music identified the positive effects of music on brain development, encompassing the development of motor skills, attention/concentration, awareness of time, mathematical (counting) skills, awareness/sensitivity, auditory awareness, and executive functions (overall brain management of consciousness in the presence of different stimuli).  A strong case was made for the value of music and art education (beyond the brain development benefits listed above) as a pathway to cultural, historical, and social awareness and sensitivity which results from the personal discipline of studying music as well as collaborating with others in the process of creating the music.

To its credit, this conference was not exclusively a talk-fest.  An outstanding musical performance opened the conference: a piano-four-hands performance of several unpublished compositions by Claude Debussy dating from his student years from age 18-21.  They didn’t sound like his later works, which is probably why they were never published.  Instead, they sounded like romantic-classical pieces somewhat similar to Brahms.  Nonetheless, there were hints of his developing personal music style as heard in his famous Children’s Corner Suite.  The speaker that followed the concert performance noted that the pieces validated Debussy’s mastering of the craft of composition, and that his fame was a result of his taking musical risks, departing from the established traditions of his time and pioneering the new musical genre of Impressionism.

With Chiara as our guide, we viewed the Roman ruins and the extensive museum which was constructed on top of the ruins of the town that surrounded the Roman amphitheater and government buildings.  Brescia was ruled in centuries following the fall of the Roman Empire by the Lombards, who brought influences from northern Europe.  The Lombards’ cathedral dating from the 1400’s survives in all its glory.

Touring the Brescia museum reminded Susan and me of the Roman artifacts we had viewed on our recent trip to Turkey.  There are so many sculptures and ornate columns, that one might imagine that half the inhabitants of the Roman Empire were working as stone masons.  The floors of ordinary homes contained ornate stone mosaics that have survived for two thousand years.  What parts of our currently constructed homes have any prospect of surviving for two thousand years?

My new favorite country to visit

It is amazing to visit Italy, where one is surrounded by ancient historical structures and artworks which remind us that the Roman Empire was the largest and longest lasting empire in the history of mankind.

But art and history aside, the people are very sophisticated, well-educated and well-dressed. And it’s notable that one can see many lovers kissing each other in public.  There seems to be less inhibition of “public displays of affection” compared with America, Germany, Sweden, or anywhere else I’ve lived.  This free social atmosphere combined with great food and wine make Italy a very appealing country to visit.  I know that I’m not unique in this assessment.  It’s a country I would enjoy visiting again (and again and again).