June 9, 2012 - Conferences and Meetings, India and the Middle East

Susan speaking at Israel’s first International Nursing Conference was the original reason for Susan and me making what expanded to be a month-long tourist trip to Istanbul, Jordan, and Israel.  Having visited Israel once before, I wanted to visit some new places, as long as we were going to travel so far, halfway around the world.  The International Nursing Conference turned out to be a fantastic conclusion to a fantastic trip.

The conference opened with a short speech by Jerusalem’s mayor, as well as speeches by other officials and leaders in Israel’s healthcare industry.  Nurses were in attendance from Europe, Asia, the Americas, South Africa, etc. ..up to 27 countries were represented. However, there were no nurses in attendance from Israel’s neighboring Muslim countries.

The opening keynote speech was by a former head of the Hadassa Foundation and Hadassa Hospital.  He was very funny…As he spoke about Israel’s outstanding record of responding to natural crises around the world, such as the aftermath of the earthquake in Haiti, he made the following point.  UNESCO has determined that male circumcision can reduce or prevent the spread of AIDS in Africa.  “Israel was happy to respond to the request for assistance, in view of our well-known expertise in this field.”  [Which reminds me of this old joke:  Moses to God: “God, let me get this straight…The Arabs get all the oil, and you want us to cut what off what?”]

Israel is at the leading edge of the developing new medical technologies.  This is done

through Israeli hardware and software researchers, and in partnership with governments and corporations from around the world.  Fields of research include development in conventional pharmaceutical and medical device manufacturers as well as in the following high tech fields:

Robotics: Which allows a surgeon to use finely calibrated hardware controllers to perform delicate operations on a patient lying nearby or miles away.

Nano-technology: Miniaturized hardware components that can be easily implanted or passed throughout the body, minimizing invasive procedures.

Laparoscopy: Making it possible to perform surgery anywhere in the body through a very small surgical opening, which is the entry point for very small cameras, surgical tools, and diagnostic tools.  Surgical wound recovery times are greatly reduced.

Integrated Medical Hardware:  Hadassa Hospital’s new OR (operating room) has an integrated MRI (Magnetic Resonance Imaging) machine in the OR, which allows a surgeon to monitor his patient throughout the procedure to the greatest degree possible, by being able to view the interior of the body on a continuous basis via the MRI in the OR.  This OR is many times larger than conventional OR’s.

The speaker’s vision of the future design of hospitals was compelling.  He sees the “hospital of the future” as being a technology center in which every tool is available for immediate utilization in a team approach, such that every patient can receive the highest level of specialized care in the shortest time, probably a maximum of two days stay in the hospital.  The patient would only stay in the hospital long enough to be stabilized for transfer to a step-down recovery facility.  The hospital will function as the treatment/procedure center of a network of step-down facilities, ranging from acute, to sub-acute, to long-term recovery.

This is a relatively brief description of the detailed vision of the future that I heard.  It reminded me of the team approach used in the Mayo Clinic, in Rochester, Minnesota, arguably America’s leading medical treatment facility.  However, the Mayo team is forced to work in the current hospital’s conventional design, in which each specialist works in his separate area, which forces the patient to be passed along from one specialist to the next.  At least the Mayo Clinic has the team approach of all physicians working on salary and available to consult/collaborate with any team member at any time.  This is an improvement on the usual American health pathway, in which a patient has to first see a general practitioner, and then be referred to a specialist, and finally be scheduled for a treatment or procedure, a process which can take weeks to get appointments and process laboratory tests, and at great cost to patients and insurance plans.

The Israeli health system is a public government-administered system.  It was proudly proclaimed that Israeli hospitals are open to all Israeli citizens without regard to religion, nationality, or economic standing.   In Bar Shiva Medical Center, which is in the South, near Gaza, we heard stories of wounded Israeli soldiers being treated next to wounded terrorists.  There was also a discussion of the issue of having to treat patients who were handcuffed and shackled.

We heard of Israeli Jewish and Arab healthcare workers who are best friends at work, but who do not socialize together outside of their work environment, a reflection of the ingrained segregation in Israeli society.  Israel’s open and egalitarian healthcare system is a point of national pride and a symbol of the efforts to present a model of social justice.  Especially in view of the tensions and prejudices that pervade Israeli society, its healthcare system is something all Israelis, whether Jewish, Christian, Arab, or secular, can celebrate.

Responding to a call for papers, Susan had sent in three abstracts to the conference planning committee last fall.  All of her proposals were accepted.  She did a presentation based on two articles of hers that were published a couple of years ago on “Music and Nature at the Bedside.”  The other two abstracts were accepted for poster presentations.  One was based on summarizing her doctoral research on patient privacy, and the other on a white paper she wrote, “Nursing, Noise, and Norms:  Why Nightingale is still Right,” offering an 8-step approach for hospitals to be able to reduce noise within their facilities. 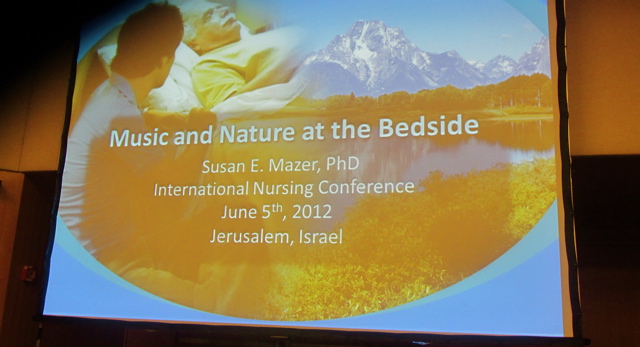 There were many interesting and compelling presentations from nurses from Israel, Canada, the US, Europe, and Taiwan.  Susan’s presentation was very well received.  It ended with her final Powerpoint slide showing a picture of a garden in Sri Lanka that was taken on our trip there in 2008, while I stood up and played a short solo flute meditation-improvisation. My musical offering was one of the only non-verbal components in a conference drowning in millions of words.

In the same track as Susan, Dr. Jean Watson, a renowned nursing theorist whose Caring

Science is now being implemented and practiced around the world, provided another step in the world of caring as a skill that improves patients and caregiver outcomes.  Jean is on our HHS advisory board, and it was reunion that reaffirmed the alignment of our mutual work.

It was not rocket science to have the idea that bringing music and nature to hospital patients would improve their environment of care.   Susan’s presentation brought clinical evidence and strong researched theories to bear on their value in improving the patient experience.  Apparently, nobody except Healing Healthcare Systems has managed to implement this idea on a widespread basis in an evidence-based clinically-sound manner.  In other words, our C.A.R.E. Channel is a new concept for nurses attending this conference from around the world.  We made some excellent professional contacts.  We would not be surprised if the Canadian nursing contacts we made finally allow us to expand outside the US into Canadian hospitals.  Also, we are very interested in trying to get the C.A.R.E. Channel in Hadassa Hospital, because Hadassa is undeniably on the cutting edge of hospital innovation.  Spreading music and nature to patients in hospitals around the world is our personal “missionary work,” our calling, our passion, our mission in life.  We are blessed to be able to do this work.

http://www.mazerandsmith.com
Israel -- Part 2: Who/What is a Jew?
Reflections on My Travel Affinity & Why Beliefs Don't Matter