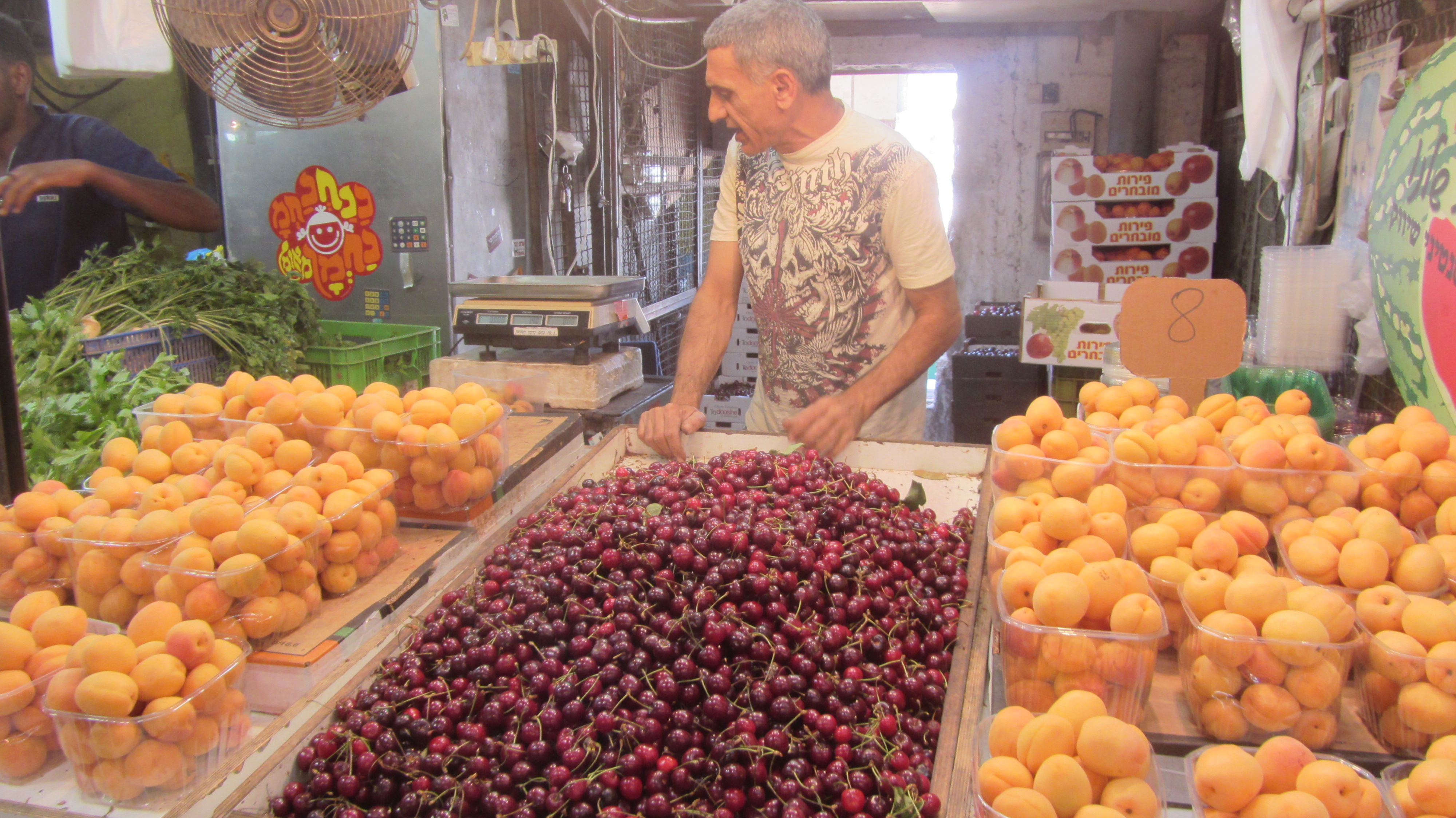 This is my third trip to Israel.  My wife Susan’s sister and brother-in-law live in Rehovot, a city close to Tel Aviv.  We’ve always felt safe when visiting Israel.  My perspective on Israel is necessarily an American one.  Israelis (including my relatives here) disagree with some of my conclusions.  In any case, the closer perspective of being in Israel raises the seriousness of the region’s issues, which receive limited coverage in the American mainstream media.

According to Israelis, their history can be summed up in the following statement:  “They tried to kill us…We won…Let’s eat!”  Israel’s national motto:  “Never again!” (One legacy of the World War II holocaust)

These two statements encompass the context of Israel’s place in a dangerous neighborhood, bounded by Lebanon, Syria, Jordan, and Egypt, as well as other more distant Moslem countries, such as Iran, Pakistan, Iraq, etc. who regard Israel (along with the US) as their enemy.  The main point of contention (beyond Islam’s general antipathy toward other religions) is Israel’s domination and control of the “Palestinian territories”, Gaza and the West Bank, since the 1967 war in which Israel was attacked on multiple fronts by its Arab neighbors who ended up losing the war to the technical superiority of Israel’s military.

Israel is America’s closest ally in the world, as measured by the billions of dollars in military aid America gives Israel every year.  Israel’s lobbyists in Washington have a strong influence in Congress.  Thus, Obama’s attempts to urge Israel to negotiate a comprehensive settlement with the Palestinians has generated outspoken opposition both in the US and in Israel.  Israel’s Jewish population itself is conflicted.  The peace movement in Israel (Peace Now) that seeks to promote a comprehensive peace treaty, known as the two-state solution, is outnumbered and opposed by religious Jews who believe that god gave Israel all the land now occupied by Palestinians.  Thus, the Israeli has been unable (or unwilling) to stop militant Jews from establishing settlements on occupied Palestinian lands, denying Palestinians access to their farms and grazing lands, while occasionally shooting at them and destroying their orchards.

Israel’s current leader Benjamin Netanyahu’s refusal to stop the settlers’ encroachments caused the Palestinian Authority’s leader Mahmood Abbas to break off negotiations.  This led Netanyahu to say that he has no “negotiation partner”.  And so, the status quo continues, under which West Bank Palestinians lack the basic freedom to travel or engage in international commerce.  The Gaza territory is an even worse situation.  Gaza is led by Hamas, a militant organization openly dedicated to Israel’s destruction.  Its Palestinian population receives smuggled weapons or builds homemade rockets, which are regularly fired into Israel.  When the rocket attacks became unbearable to Israel, it counter-attacked, resulting in more that ten times as many casualties in Gaza as the Palestinians had inflicted on Israelis.  Unfortunately, the current temporary truce is simply a time of preparation by both sides for the next war.

Mutual distrust and hatred is so engrained that it’s hard to see a solution to this decades-long impasse.  In my conversations with my sister-in-law and brother-in-law, they think the two-state solution will never materialize, because the religious factions will never allow it.  They think there would be an Israeli civil war before an independent Palestinian state could come into being.

Secular Jews are more open to a negotiated peace in order to avoid the one-state solution in which the occupied Palestinians are forced to endure a perpetual second-class existence.  The Palestinian birthrate is higher than the Israeli birthrate.  So the one-state prospect necessarily would result in a Jewish minority state, in which Palestinians would not be afforded the one-person-one-vote right currently given to minority Israeli Arabs.

Thus, it’s not surprising that peace has been elusive ever since the United Nations created Israel in 1948.  Jews and Moslems had co-existed throughout the Middle East for many centuries.  Indeed, in the Moslem religion, Jews are “people of the Book,” i.e. mentioned by name in the Koran, which means that their religion is supposed to be respected.  Mutual respect is hard to find in the Middle East these days.  The only issue in which Jewish, Moslem, and Christian leaders all agree upon is that they all condemn homosexuality.  Orthodox Jews attacked gay-pride demonstrators in Jerusalem.   To be openly gay is impossible in most Moslem societies.

Israel is a democracy somewhat like America was before the civil rights era, in that Israeli Arabs face discrimination similar to that endured by blacks before civil rights laws.  I can happily report that the Israeli press is free and uncensored.  All points of view are freely expressed in the daily newspapers.

Israel is a democratic state, with Judaism as the primary religion.  Other religions are practiced without restrictions except that proselytizing for other religions is not allowed.  There are no civil marriages in Israel.  Thus, a Jew who wants to marry a Christian (or Moslem) would have to get married outside the country (often in Cyprus).

Until the most recent election, the small religious political parties controlled the balance of power among the larger parties.  They used their political influence to continue receiving special privileges, such as being exempt from military service, low or no taxes, and receiving generous government welfare.  This was based on past precedent dating from the founding of the state.  However, for the first time in the most recent election, the parliamentary majority avoided having to include the orthodox religious parties as part of their coalition.  So now there is a movement in the Knesset (legislature) to remove special exemptions from the orthodox Jews and to require them to perform mandatory military service just like other Israelis.  (Israeli military service is mandatory for both men and unmarried women.) This change in the law is still being discussed.  The final bill has not yet passed.

The reality is that many Israelis are secular, and resent the special treatment awarded to religious Jews that is not afforded to secular Israelis.  This difference is encompassed in a statement I read in the newspaper:  that the orthodox Jews consider Israel to be a Jewish state with democratic characteristics, while secular Jews consider Israel to be a democracy with Jewish characteristics.  This is the fault line that will determine the ultimate resolution of the Palestinian problem.  The one-state solution would mean a non-democratic, Jewish-minority Israel.  The two-state solution would mean that Israel could remain both democratic and majority Jewish.  Unfortunately, while lip service is given to the two-state solution, the “facts on the ground” are that the occupation of the Palestinian territories has progressed for almost a half a century.  As the religious settlers continue to illegally occupy Palestinian lands, hoping to rid the territories of Erretz (greater) Israel of non-Jews, the situation on the ground continues to worsen.

It’s hard to imagine the current impasse lasting another half century without more wars in which Israel might not be victorious as it always was in the past.  Israel is assumed to have nuclear weapons, which it says it would only use if attacked.  There is great fear of Iran achieving nuclear capability.  Preemptive attacks by Israel on Iran have been openly discussed.  Absent a comprehensive peace agreement, the future looks increasingly dangerous for all.

Much of the Middle East is currently in turmoil, the result of the Arab Spring, in which despotic leaders have been deposed in Tunisia, Egypt, and Iraq.  Syria is falling apart in a civil war that has seen over seventy thousand civilian casualties, while its dictator, Assad, clings to power.  The fighting of the Moslems among themselves, Sunnis versus Shiites, etc., gives Israel a measure of temporary relief.  If all its traditional enemies are busy fighting each other, they aren’t in a position to direct their aggressions against Israel.  If the Assad government falls in Syria, Iran will find it difficult to arm Hezbollah in Lebanon, Israel’s enemy on its northern border.  I hope Israel will use this temporary respite to solve its Palestinian problem without the outside pressures that will certainly mount, once the Syrian conflict comes to an end.  In my opinion, resolving this problem is the only way Israel can be assured that “never again” applies to the potential holocaust of another Middle East war.