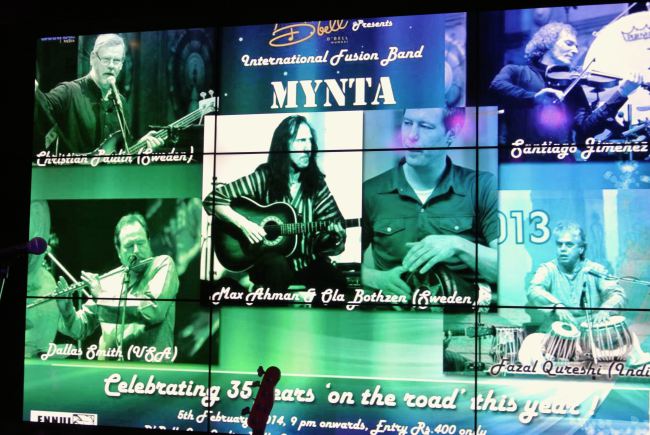 After the hectic two days in Bangalore, we flew back to Mumbai just in time to check into our hotel quickly and then board a taxi for the grand Alla Rakha Memorial Concert.  This is an annual event organized by Fazal’s older brother, Zakir Hussain, in honor of their father, the great tabla master Alla Rakha.  Zakir Hussain is currently India’s most famous musician.  He’s played with countless famous music stars of all genres around the world.  He starred in the movie Heat and Dust opposite Julie Christie.  He is a pioneer of world music, using his musicianship to bridge gaps of culture, language, aesthetics, and traditions.

This year’s concert, as usual, featured Mumbai’s top drummers, classical instrumentalists, as well as some international guests, including two Spanish “Gypsy Kings” guitarists.  The concert lasted four hours without an intermission, in which different soloists would present themselves and then play in combination with Zakir and the other musicians on stage.  The last hour of the concert had as many as ten musicians onstage in a massive percussion (mostly) jam, where rhythm was king.  The concert was also an occasion for me to encounter many old friends from previous tours.

During our travels, one conversation bears relating.  Fazal related the story of having played in a music festival in Jerusalem, Israel.  After the concert, he wanted to visit the Temple Mount, the famous Islamic mosque adjoining the Jewish “Wailing Wall,” all on the site of the original Jewish temple of King David of biblical fame.  Fazal was forced to prove that he was Muslim (he is!) by reciting from the Koran, which he easily did.

Fazal remarked about how Jesus is revered as one of Islam’s holy prophets, in a lineage that starts with Moses and ends with Mohammed, the “final prophet.”  We talked about the fact that Islam, Judaism, and Christianity all share Abraham as a common ancestor.  The bible, Koran, and Talmud all share many of the same religious dictums, based on the monotheistic concept of a single

all-powerful god (as contrasted with the polytheistic Hindus).  We discussed how so many customs are similar, e.g. kosher (Jewish) food versus halal (Islamic) food, mutual prohibition of pork, etc.  We discussed how the core beliefs of these religions are practically identical, in terms of how people are supposed to treat each other, treat the poor, reject materialism, embrace spirituality, and live good lives.

So where are the religious leaders from these traditions that actively reach out to their brother religions?  Where are the preachers who celebrate the similarities as opposed to condemning the minor differences between these religions?  Why don’t the various religious groups sharing residence in Jerusalem embrace each other as neighbors instead of hating each other?  Jerusalem is truly the most socially segregated city I’ve ever experiences.  Walking down the street, an orthodox religious Jew, Muslim, or Christian will not make eye contact.  There is no informal social interaction of any kind.  As a tourist/outsider, I don’t exist

in their world, other than that they might be thinking that they wish I wasn’t there.  I’m regarded as, either a heathen, an infidel, or certainly not a member of god’s chosen people.

I think the current Pope of the Catholic Church has spoken refreshingly in a more universal way than many of his predecessors.  I don’t think the Greek Orthodox Christians of Jerusalem have heeded the Pope’s words.  The Greek and Roman Catholics represent a historic schism similar to Shia and Sunni Muslims, or Protestants and Catholics.  Wars have been fought for centuries and continue to be fought between these groups.  The single

issue that I’ve ever observed that united these competing religions was an article I remember from the Jerusalem Post:  “Jewish, Christian, and Moslem leaders unite to condemn the gay pride demonstration planned for Jerusalem.”  If that’s all that the world’s major monotheistic religions can agree on, it’s enough to give religion in general a bad name.

And on the seventh day we rested.  It was the only day of the tour without some kind of professional activity.  We could have attended a big festival in south Mumbai.  But nobody had any desire to sit in traffic for an hour and a half each way to reach the festival.  Instead, everybody just did whatever they wanted, which included exploring the immediate neighborhood of our hotel, taking a three-wheeler motor rickshaw (in Thailand known as tuk-tuks), and for me, the first time to start writing this blog.

One of my favorite things to do in India is to have fresh green coconut water.  They cost only fifty cents, and are the most sterile source of liquid in all India.  It can even be used for medical infusions in case of dehydration caused by acute dysentery.  The other thing we all did was to visit a local restaurant offering traditional Indian and Chinese dishes.  I love Chinese food in India.  It’s spicier and more interesting than traditional Chinese.  Just as with the native Indian dishes, all the ingredients are fresh and sourced from local farmers.  In America we have to create a locovore movement in order to encourage the use of locally-sourced fresh meats, vegetables, and herbs.  In India, because everything is so fresh, even in our little modest inexpensive local restaurant located in a far-flung suburb of a city of twenty million people, I felt like the meals were superior to any available at any Indian restaurant I have visited in the states.  That’s why I will refrain from going out for Indian food for at least a couple of months when I’m home again.  I’d only be disappointed by comparison.

The final Mynta concert was at a new jazz club that opened only this past November.  It is called D’Bell’s, and is competition for the more famous Blue Frog club where Mynta performed several times in the past.  The club is located on the ground floor of a huge financial skyscraper named the Indiabulls, which houses financial institutions.  It is strange (but typical) that everyone has to go through a metal detector and airport-type security to enter the building.  Because the club is so new, people don’t know how to reach it in such an unlikely location.   We didn’t have a big crowd, but we were gratified by the large number of musicians that came out to hear us.  It seemed like all of them commented positively on Facebook after the concert.  That will likely be Mynta’s last concert together until the next India tour around the same time next year.

In the neighborhood of D’Bell’s is a brand new upscale music school called the True School of Music.  It opened within the last few months. It’s general curriculum organization was designed by my friend Dee.  Dee also set up the school to be associated with the Manhattan School of Music.  The jazz faculty consists of recent graduates of the Manhattan School.  They come to Mumbai for a quarterly teaching commitment.  Some might like the job enough to stay on.  The school is outfitted with the latest instruments and teaching tools, including classrooms with electronic drum sets, keyboards, computers, etc.  There is an auditorium as well as band practice rooms.  One noticeable difference is that standing in the school’s corridors, one doesn’t hear the sounds of practicing musicians from all directions.  Instead, most of the instruments are electronic with the students in headphones, which allows many students to practice at the same time in the same rooms.  Also, because the building is newly constructed, the sound insulation is excellent, and the electronic cabling is all built in under the flooring, resulting in the absence of loose cables normally present in music school practice rooms.  Overall, the facility is very impressive.

The Swedish members of Mynta flew back to Sweden in the early morning following our final concert at D’Bell’s.  We all rode back in two large taxis with the instruments to Manish’s apartment.  Manish brought out wine and cheese, and we had a little parting celebration.  They didn’t need to be at the airport until 3am or so.  Manish didn’t drink any wine, but drank Red Bull instead.  I had drunk a beer with dinner after the concert (around midnight—typical for Indian dinners).  Following a couple of glasses of wine, I felt like passing out.  But I was determined to stay awake to see the guys off to the airport.  The fact is, I am no longer able to pull all-nighters like I could at a younger age.  I was able to sleep in the next morning.  But Manish got up after only a few hours sleep and went to work at his office.  He’s much younger of course.

Because I had flexibility, I scheduled my flight out (to Dubai) for two days after our final gig.  This enabled me to attend a very special concert featuring my good friends, keyboardist Louiz Banks and bassist Sheldon D’Silva.  They were accompanying a progressive sitarist, Ravi Chari, with featured drummers Trilok Gurtu and Sivamani.  Overall, everyone played great.  But most impressive to me were the drummers, Trilok and Siva.  I had heard them separately several times.  This was supposedly the first time they had played together in concert.  In my humble opinion, along with Zakir Hussain, Trilik Gurtu and Sivamani are the undoubtedly among the best drummers in the world, at least according to my experience and aesthetics.  At the end of the concert, after the ovations, Sivamani went over to Trilok and prostrated himself, i.e. he lay down flat on the floor with his hands up pointing to Trilok.  This was a magnanimous show of admiration and humility toward Trilok, whom Sivamani considers a source of personal inspiration.  Thank you to these artists for a truly inspiring performance.

In conclusion, I want to thank several people, starting with Mynta’s agent, Manish.  Mynta is so lucky to have Manish manage its tours.  He picked me up at the airport, early in the morning when I arrived.  He gave me all the cash I would need during my stay.  (I never changed any of my own cash.)  He hosted me in his apartment when I wasn’t with the band.  He arranged the hotels, the taxis, meals, indeed, everything that he could to make our visit as easy as possible.

Many other Indians were as hospitable as one could imagine.  They actually got angry when I wanted to pay for a round of drinks or whatever, saying I was the guest, so I wasn’t allowed to pay.  In the universal context of the world of entertainment, Mynta is just a little blip.  But when we tour India, we feel like the big stars we always knew we were (in our minds).  There was some discouragement when two of our big concerts were cancelled at the last minute.  But the positive receptions to the ones we did play fuel our desire to come again.  Playing music keeps us young at heart, so I intend to keep playing as long as I’m physically able.  Thanks to my Mynta bandmates…I look forward to seeing you again soon, I hope!

Next stop in my travels:  Dubai

http://www.mazerandsmith.com
India 2014: On tour with Mynta
Dubai: The Richest Country in the World