is magic.  What would previously have been so impossible as to be unthinkable is now commonplace.  It was amazing easy to board a plane in Reno to travel to India via Seattle and Dubai.  Traveling halfway around the world in this case means changing climates as well.  On the morning of my departure, I had to scrape the frost from the car windshield in order to drive to the airport.  Yet, in India the temperatures are summer-like, 70’s-80’s Fahrenheit, low 30’s Centigrade.

This is my first time to fly with Emirates Airlines, Dubai’s national carrier.  Emirates has earned consistently high ratings, and so I chose it instead of my previous choices of Delta, Lufthansa, Air France, KLM, United, and American airlines, all of which require a stop somewhere in Europe.  The Emirates route is a polar one.  We flew overnight north across Canada, north of Greenland, turning south just over the top of Norway, proceeding across Russia and the former Soviet republics, over the Caspian Sea, over Iran, and finally landing at dusk in Dubai.  That flight 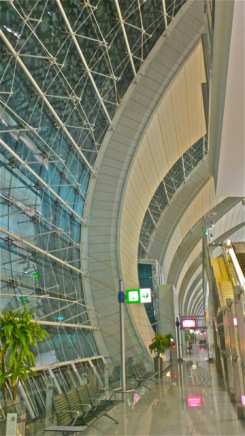 My favorite part of Emirates Airline is the constant views of the on-board cameras, one looking ahead from the cockpit, and the other looking directly down at the ground below.  The only other airline that I’ve flown which had both these cameras was an Indian domestic airline, Kingfisher (like the beer) Airlines.  Dawn broke as we crossed over northern Russia, near Murmansk, just across the border from Kirkenes, Norway, where Susan and I boarded our Hurtigruten Norwegian cruise

several years ago.  The landscape was a barren snow-covered tundra, with little visible vegetation.  Farther south we flew over towns and villages, which didn’t look noticeably different from those in the US, at least from 39,000 feet.  Later, I watched the landscape as we flew over Iran.  There were only traces of snow on the mountain peaks.  Otherwise, the landscape looked dry, barren, and Martian-like.  We passed over some villages.  I could see irregularly-shaped fields.  These were obviously the fields cultivated by small farmers, not larger scale agricultural developments.

It was strange to think that I was flying directly over America’s “enemies”.  Would-be president Mitt Romney wanted to restore Russia to the role of our “greatest enemy”.  Thank goodness he’s not able to fulfill that threat. Our closest neighbors and best friends in Reno are from Iran.  Looking down on these poor rural villages with their small farmers, it’s surreal to think of them as potential future targets for American (and Israeli) military destruction.  The poor people always suffer for their leaders’ manias and neuroses.  Of course, whole populations can embrace a common thread of craziness as set forth by their leaders.  That is one of the primary causes of wars.  Thus, I was heartened to hear that the just-completed Israeli election had resulted in a boost for moderates and a reduction in support for the more militant Bebe Netanyahu.  That election result hopefully means that it will be less likely that Israel will stage a Pearl Harbor style “preventive” attack on Iran, to supposedly delay Iran’s efforts to develop a nuclear bomb.

Arriving in the early morning hours at Mumbai’s international airport, the timing was perfect.  I met my bandmates arriving from Sweden in the immigration line.  We then took the shuttle bus to the domestic air terminal

to continue our journey to the site of our first concert, Nagpur.  Nagpur is in the middle of the flat plains of India, an hour and a half flight

from Mumbai.  I had never really heard of it before.

The event was a festival concert to be held in the sports stadium.  Mynta shared the billing 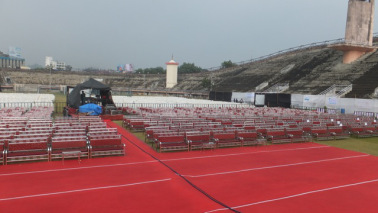 with one of India’s biggest stars, a brilliant percussionist, Shivamani.  The setup

took many hours in a light

rain.  The organizers managed to provide covers for all the instruments.  Such preparations consist of hours of just standing around and waiting for all the setup details to be completed.

Playing in a stadium is something of a rock-star fantasy for a jazz musician like myself.  There’s an incredible sense of power that comes from hearing oneself play a note into the microphone and then hearing the reverb and echo coming back for several seconds from the reflections off the far walls of the stadium. 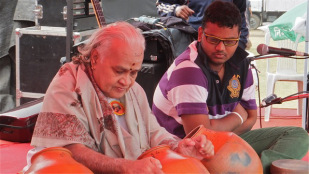 concert.  Our agent Manish secured the presence of one of the giants of Indian music, Vikku Vinakrayam.  Vikku, now in his early seventies, was one of the original members in the late 1970’s of guitarist John McLaughlin’s first Indian fusion group, Shakti, which also contained Fazal’s older brother, tabla superstar Zakir Hussain.

It was a wonderful experience to play with Vikku.  He plays the ghatam, a “clay pot” instrument with humble folk origins, which Vikku’s musicality has elevated on the world stage.  We were also joined by Vikku’s nineteen year old grandson who plays the Indian tambourine.  We had a rehearsal late on our arrival day in Nagpur, after having rested a few hours from our long flight

.  I was flattered that Vikku really liked my composition Seven-and-a-Half.  He requested that he would take his longest featured solo as part of my piece.  In spite of his having toured the world, Vikku remains a simple personality, a devout Hindu, who observes all his religion’s rituals.  I found him to have a very “saintly” personality and presence. 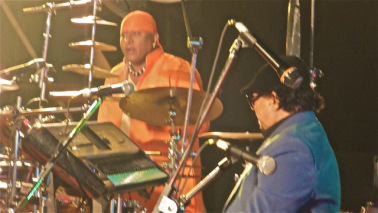 Luckily, the rain stopped before the concert, though the weather reduced the expected turnout.  Nonetheless, there were at least several thousand attendees.  The stage was set up such that Mynta was on one side and Shivamani with his incredible collection of percussion instruments was on the other.  One of his backing musicians was my old friend, the “godfather” of Indian jazz, keyboardist Louiz Banks.  There was a large video projection screen

behind us as well as elaborate lighting.  Mynta opened the concert, followed by Shivamani’s set, with a grand finale in which all the musicians played together.  It was one of the most memorable concerts of my life!

Another thing that happens in India, where visiting artists are so highly regarded, is that people line up after the concert to request autographs and to take photos.  One tries to respond as graciously as possible, though eventually Manish had to tear us away from the adoring fans in order to board the vans waiting beside the stage to take us back to the hotel. This was a great opening event for this tour.

Even in the hotel in Nagpur, I was able to watch CNN and check my email.  This is another sign of that the world continues to evolve into a “global village.” 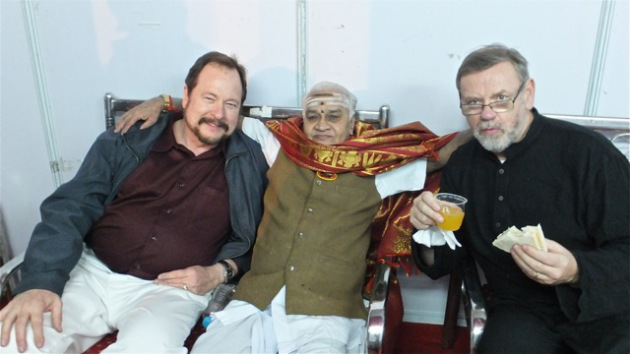