I Love My Job

A couple of decades ago, my wife Susan and I worked as entertainers on cruise ships.  Often the entertainers sat together at mealtimes.  A common observation was that the job of being a comedian was the most difficult of all the entertainers.  Having to be funny for ten or fifteen minutes before a group of elderly strangers (as well as having to avoid any jokes that might be interpreted as obscene, irreligious, or politically incorrect) was difficult indeed.

I asked one comedian how it he developed his materials.  He explained that he looked at every situation every moment of the day for possible humorous potential.  That developed a spontaneous sense of humor that allowed him to improvise within the course of one of his shows.  The most skilled comedians are those who are able to follow up on whatever subject seems to evoke the strongest laughter from the audience.  And so while the rest of us entertainers were simply enjoying our first-class meals, this comedian was looking for humor all the time.  Sample joke:  Since the endless buffet meals are the mainstay of cruises, people board the ship as passengers and disembark a couple of weeks later as “excess baggage.”

I was reminded of a couple of jobs I had in my youth as a salesman.  I didn’t like those jobs because they made me insidiously assume the mindset of regarding every person I met as a potential buyer or customer, instead of simply meeting a new person without a hidden agenda.  And yet, there is something to be said for embracing the mindset of whatever a particular job requires.  Certainly, I would want the pilot of my airline or the surgeon of my medical procedure to be fully into their chosen roles, and not be distracted by other aspects of their lives apart from their highly skilled professions.

The Greatest Job in the World

My chosen profession(s) have not required the type of concentration required by those who hold the lives of others in their hands.  My primary lifelong profession has been as a performing musician.  Music performance certainly requires a deep level of concentration borne of disciplined practice and repetition merged with musical spontaneity and a developed aesthetic sense, resulting in (hopefully) an appealing emotional experience for the listener.

My other profession (my “day job”) as a video editor for Healing HealthCare Systems is a mostly solitary endeavor without the immediate gratification that comes as a result of a musical performance.  However, the delayed gratification that comes from this work, in the form of heartfelt letters from hospital patients and staff who have benefited from The C.A.R.E. Channel, empowers my work.  The success of Healing HealthCare Systems is the ultimate reward for this, my second profession, as a video editor.

Preceding my work as a video editor is the job of acquiring the basic nature images for eventual editing for The C.A.R.E. Channel.  When I am able to work as a videographer/photographer, I feel like I have the most wonderful job in the world.  I get to travel to different parts of the world and look for the most stunning scenes to capture as video and photo images for later integration with the beautiful music that comprises The C.A.R.E. Channel, for the benefit of patients forced to be in the hospital who usually only have commercial (stress-producing) television programming with which to pass the long solitary hours. 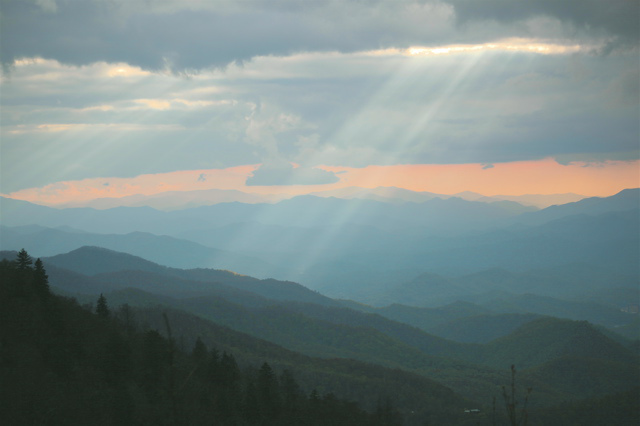 Doing my job in Georgia, North Carolina, and Tennessee

The agenda of my latest trip was to fly from Reno into my hometown of Columbus, Georgia, and then travel by car with my best friend Bill into the mountains of north Georgia, North Carolina, and Tennessee, in search of beauty to capture on video.  This third week of April was chosen because it was expected to be the height of the blooming season for azaleas and dogwoods, the prevalent flowers of springtime in the South.  There were two problems with these plans.  First, this past winter was very mild in much of the country, perhaps as a manifestation of the effects of global climate change.  Thus, the azaleas and dogwoods had bloomed perhaps a month earlier than usual, and were no longer suitable for videoing.  Second, the weather during my week in the South was dominated by gloomy clouds and rain.  And so, the mountains landscapes were visible mostly in different shades of gray, with relatively little color.

Following the model of my comedian colleague, I tried to think like a fulltime professional photographer.  What would Ansel Adams have done in my situation?  (Simple answer:  shoot photos in black and white, where everything is expressed as a shade of gray.)  I had to look for the beauty in the smaller things rather than simply being able to point and shoot the camera in any direction.  I looked for flowing water…waterfalls…distant mountain ranges…tree branches that might frame a view.  Luckily, the sun shone a few times during my week, so I was able to acquire some photos and video clips with vibrant colors, just not as many as I had hoped for.   I already have dates in mind to return to some of the same locations in the Fall and attempt to capture images with more colors, including Autumn leaves. 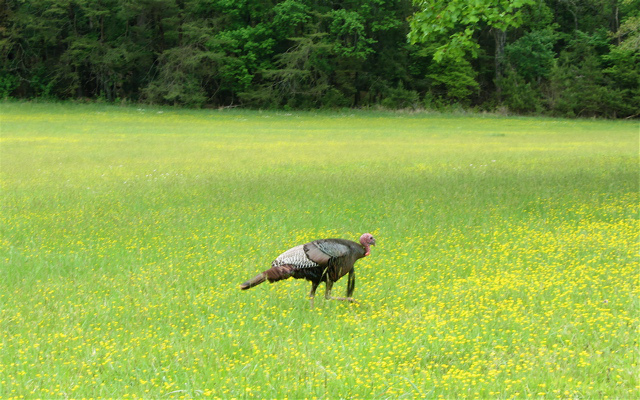 Bill and I are great travel buddies, having taken a number of road trips together.  We met as infants, since our fathers were friends their whole lives.  We share the joys of driving through interesting landscapes, familiar and unfamiliar.  We stopped daily for barbeque, that pinnacle of Southern cuisine.  We met some folks from LA (lower Alabama) and enjoyed food served ASAP (as Southern as possible).

I also had the pleasure of doing one photo shoot with my first cousin Renner (whose name is a palindrome, i.e. spelled the same way backwards and forwards).  Renner’s skill has yielded success and recognition in the form of winning in juried competitions.  On a gray rainy day, we visited the Butterfly House at Callaway Gardens, in Pine Mountain, Georgia, the largest enclosed butterfly environment in the country.  I wish the light had been better.  Butterflies respond to bright sunlight, and there wasn’t any. 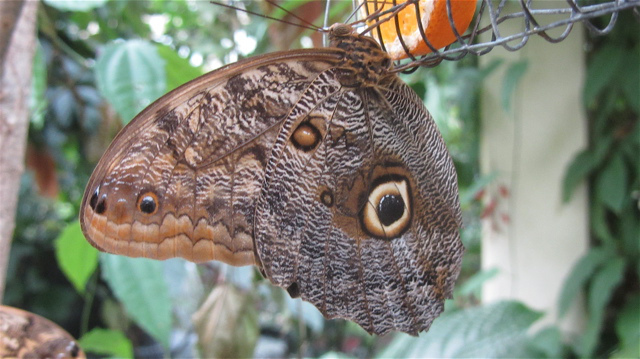 Bill drove us to an infamous section of North Carolina called the Tail of the Dragon, Highway 129, near Deals Gap, North Carolina.  The road contains 212 curves in the space of eleven miles.  Motorcyclists from around the country and around the world are drawn to the road to test their skills, race, and try not to get a ticket from occasional NC highway patrolmen.  There were several establishments that catered especially to bikers.  Sports car drivers also appreciate the challenge of this ultra-curved road.

We stayed overnight in Cherokee, North Carolina, ancestral home of the Cherokee Indian tribe.  This tribe was forcibly uprooted from its home and forced to Oklahoma, traveling the “Trail of Tears.”   Eventually, some tribe members were able to escape the Oklahoma reservation and renew their ties to this part of the country.  There are many Cherokee names around the region.  The touristy stores sell Indian, i.e. native American, souvenirs more associated with the plains Indian tribes, e.g. Eagle feather headdresses.

The largest building by far in Cherokee is the new Cherokee Harrah’s Casino.  We walked through it on a slow weekday evening.  But judging from the size of the parking lots and the large hotel, busy summer weekends must bring enough visitors triple the population of the town.  The Cherokee Harrah’s Casino is bigger than any hotel casino in Reno.

On the plane flight back, I read some of my stockpiled NY Times magazine sections (that I otherwise don’t have time to read).  One bit of trivia is that the largest casino in the country was founded by an Indian tribe in Connecticut.  The total size of all its buildings is 4.7 million square feet.  This is larger than the Pentagon, the largest single building in the country.  And the casino is $2.3 billion in debt.  In a nutshell, gambling, aka gaming has peaked as an industry.  Younger gamblers are gambling online instead of going out to huge dinosaur casinos.

Finally, it is humbling to be in the presence of such immense undisturbed landscapes, forest-covered mountains preserved as national park or national forest land.  Lest we forget, the United States of America is a very rich country in its reserve of natural resources, as long as our pioneering population doesn’t compromise or destroy these resources in the name of economic development. 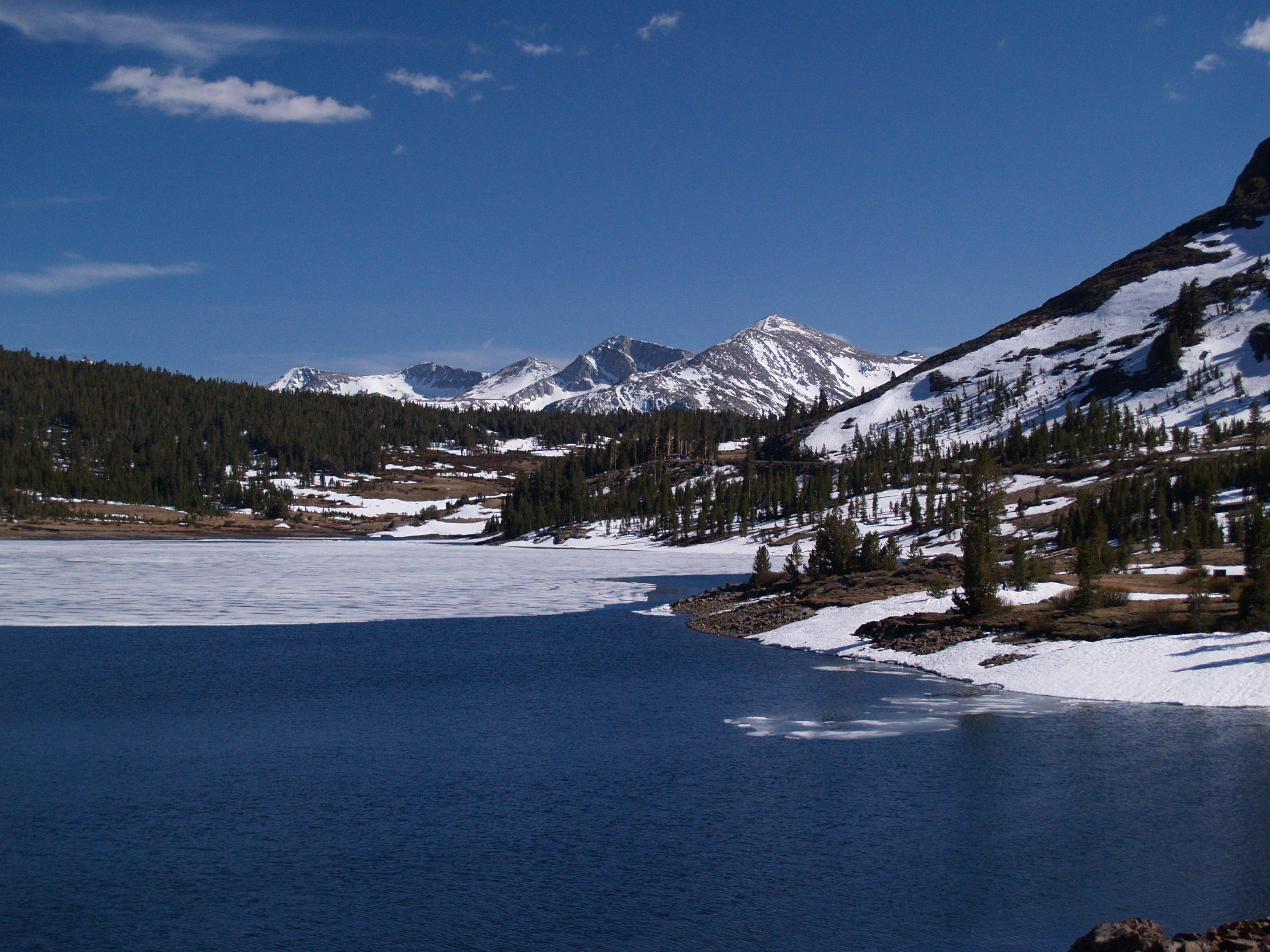