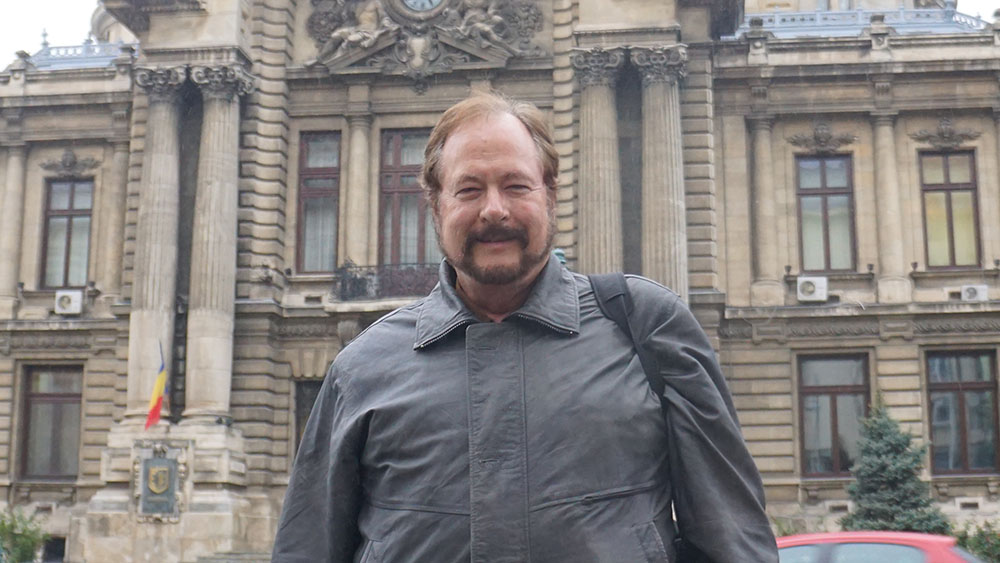 When I took Latin in high school, I learned the acronym FRIPS for the five Romance languages, derived from Latin: French, Romanian, Italian, Portuguese, and Spanish. So here we are in Romania, and I can recognize half the written words. I didn’t know much about Romania before. In my five days here, I have learned a lot. My naïve preconception was that Romania was inhabited by gypsies and peasants. Wow, was I wrong! We traveled a bit in the province of Transylvania and saw some older traditional houses. But the residents had every modern convenience. So let me declare, Romania is a modern, sophisticated, highly developed, relatively affluent country, not at all like the outdated memories of its Communist decades.

The countryside is indeed beautiful. But the beauty hides a traumatic history of invasion and domination by the Roman Empire (from which the name Romania is derived), the Ottoman Turks, Vlad the Impaler, the Austro-Hungarians, the Germans, the Soviet Union, and finally, Romania’s own dictator Chauchescu. Romania suffers in a similar fashion as Poland, being a smaller country being invaded

over history from every direction. Its bloody history reflects the historical conflicts between nationalities and religions that have dominated European history for centuries. A cursory study of Romanian and European history in general confirm a controversial report that since the end of World War II, the world has entered perhaps the longest “peaceful” period in world history. (ISIS, Kosovo, Rwanda, and Iraq are minor wars in comparison to the major wars of past centuries.)

Romania is perhaps best know for the legend of Dracula, the vampire, actually a creation in the late 1800’s of Irish writer Bram Stoker. Stoker derived inspiration from the real history of Vlad the Impaler combined with common superstitions regarding witches, blood-lust, and religious symbolism.

Vlad the Impaler was a real historical character, a Romanian ruler infamous for his method of murdering his enemies, real and projected. I won’t describe impaling as an execution method. (You can google it.) Suffice it to say that beheading by the sword was the preferred and merciful means of death, compared to impaling. Beheading was a “privilege” reserved only for nobility. Nobility was consoled by the belief that beheading assured entry into heaven. Just as with contemporary Islamic radicals, Turkish soldiers of the invading Ottoman Empire believed that death in battle assured entry into heaven.

Our Romanian visit was blessed and enabled by our having met a couple of Romanian musicians working on the Hurtigruten cruise up and down the Norwegian coast, which Susan and I made together with our dear friends Bill and Linn last year. The Romanians, Danny and Beatrice, have had very successful international careers playing in luxury hotels from China to Dubai. They had a pending offer of a job at the Mandalay Bay hotel in Las Vegas. However, because the offer came soon after 9/11, they were unable to obtain American visas necessary to accept the contract offer. Beatrice performs often with her twin sister, Roxi, and they are indeed very pleasant to see and hear. The Twins Band, managed and led by Danny on keyboards, performs a mix of European and American jazz and pop music, enabling them to get bookings around the world. They live in a million-dollar mansion in Bucharest (which would be worth several million dollars in California). Congratulations to them for their successful music careers! Their hospitality has been wonderful. I told them that for the rest of my life, whenever I think of Romania, it will be as seen through their eyes and their great tourist guidance.

The years 1987-89 witnessed the disintegration of the Soviet Union. One by one the satellite states of the East Block pealed away from Russian/Soviet domination. The most notable single event was in these years was the fall of the Berlin Wall, resulting in the reunification of Germany. Only in Romania was the transition marked by violence and the deaths of hundreds of Romanians. Nikolai Chauchescu was a dictator in the Soviet mode. He instituted a complete media propaganda apparatus, supported by a spy network that persecuted and oppressed any opposition to his rule. Chauchescu, like many dictators, sought to create a cult of personality in the model of North Korea, which he sought to emulate. He wanted to build the biggest building in the world, a “people’s” building, which though never finished, is the second largest building in the world, surpassed only by the Pentagon. When the revolution against him began in a border city of Romania, Chauchescu called the demonstrators “terrorists” and ordered the military to kill them all. Hundreds died, but the revolution expanded. When it reached the capital, Bucharest, again he ordered the army to kill them all. Many died, but the military soon balked at slaughtering its own citizens. Once the military changed sides, Chauchesku’s days were numbered. Though he tried to escape, he and his wife were soon captured, tried in a two-hour court hearing, and immediately executed by firing squad.

In downtown Bucharest, there is a pictorial display of the history of the downfall of communism. It gives a frank appraisal of the communist decades following World War II as a disaster for the country and its people. Romania had unfortunately allied itself with the Nazis in World War II, so that at the end of the war, it was “given” to Russia to be part of the emerging Soviet Union. From everything I’ve seen, current times are probably the best period in Romania’s long history. It is a member of the European Union, though it has not net adopted the Euro. It has oil reserves and is a popular tourist destination.

Finally, a personal political observation relating to American politics: Learning about Romania’s history has reminded and re-informed me of the absolutely terrible effects of dictatorial rule, most often referred to as “communist.” In our current crazy presidential politics, Democratic candidate Bernie Sanders, an avowed socialist, is often referred to by Republicans as a “communist.” They are so mistaken, ignorant, and blinded by their own perverted ideology, that they can’t tell the difference between North Korea and Sweden. It’s a shameful reflection on American society that so many Americans as so naïve as to believe this nonsense. To any readers offended by this brief political rant, please forgive me.

I will let my photos show some of the sights of Bucharest and interior of the country. It has been wonderful to get to know this country, even superficially given the short visit, of which I was previously ignorant.