In 1969, I left Florida State University and

my hometown of Columbus, Georgia, to attend a “junior year abroad” in Kiel, Germany.  That was the middle of the Vietnam War, and I ended up staying abroad for three and a half years, studying and traveling, in part to avoid having to confront the prospect of military service.  (I was thus a “draft evader,” not a deserter.)  During those years abroad, I traveled to Sweden for the first of many times, as well as to India and Afghanistan.  In retrospect, leaving home to live outside the US was the single most life-changing step I ever made in my life.  I was forever changed.

During my time in Kiel, I met manypeople, cultivating good friends, both German and American.  For some reason, that circle of friends bonded very strongly.  Fast forward three decades, and through the efforts of a few people to contact everyone from those years, we had our first “reunion” (attended mostly by the Americans) in Las Vegas.  Subsequently, every two years, we had a reunion…first in rural New York at the alpaca farm of one of our group members…later in Kiel, then again in New York.  We’ve named ourselves the Kieler Old Farts (KOF).

Two years ago, the group convened in Reno, my hometown.  The suggestion was made that we try to meet every year instead of every two years.  Last year, we met in Tuscany, Italy.  This year, we met on the island of Poros, Greece.  Our next meeting is projected for San Diego in early 2015.  It is quite amazing to get together with friends that met each other over forty years ago.  In some ways, these reunions are reminiscent of high school class reunions.  They also highlight the fact that we’re all in our sixties, which is to say, inevitably changed from how we were in our twenties, when we first met each other.

A few quick personal observations:  Greece is really a sea-centered culture. its coastline is very irregular, filled with small bays and harbors, while the land is mountainous and rocky, not so conducive to agriculture.  The people smoke cigarettes more than any place I’ve ever been…both men and women, young and old.  (I’ve never been to China, which I hear is worse.)  Greece exemplifies the stereotypical Mediterranean café culture.  All restaurants

have four times as many seats outside next to the street as inside.  (In Italy, it was more in a proportion of one to one.)  Greeks like to sit outside and smoke and drink coffee.  My friends and I could sit talking for hours, sipping our coffee, tea, or wine, and the waiter would never bring the bill until we finally had to request it.  Everyone (outside of Athens) was typically very relaxed, which makes the Greek islands wonderful vacation destinations.

The island of Poros is a two-hour ferry ride from Athens (only one hour by fast hydrofoil ferry).  It is only slightly offshore from the Peloponnesian Peninsula, the heart of Greece.  There are regular water taxis crossing between Poros and the mainland, which cost one Euro ($1.40) and take only five minutes.   I’m told that Poros is not as dramatic as some of the more famous islands such as Mykonos, Santorini, Corfu, or Rhodes, but it’s still very beautiful and costs much less than these other more famous Greek island destinations preferred by the rich and famous. 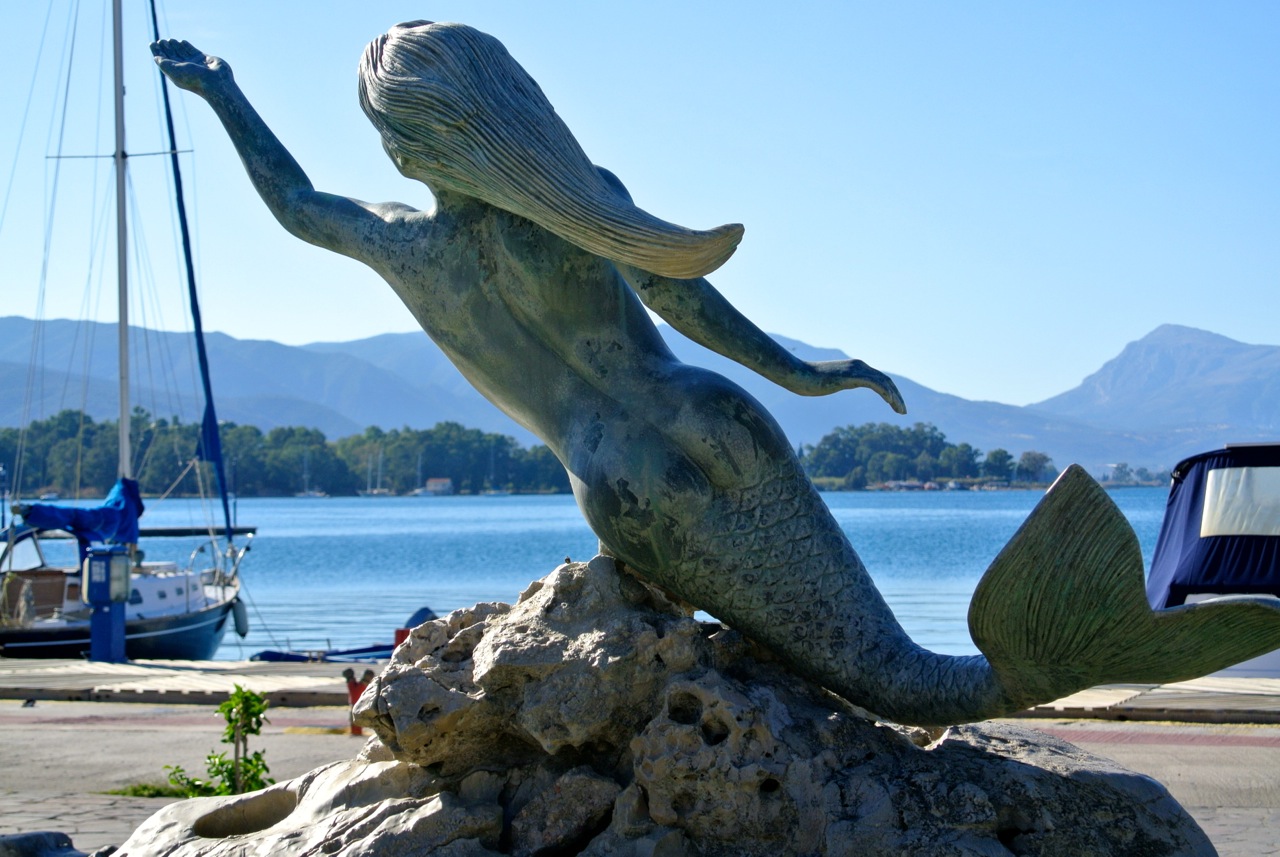 There were only three Americans attending this year’s reunion…the rest of the dozen or so attendees were German and Greek.  Thus, we spoke German together almost exclusively the whole week.  During my year and a half in Germany, 1969-70, I had become reasonably fluent in the language.  It took most of the week, but like riding a bicycle, the language came back to me.  During the first couple of days, I found myself searching for vocabulary.  During the next couple of days, I would find myself translating in my mind (and also in my dreams!).  Finally, during the last few days, and especially after a few glasses of wine, I could simply speak with out having to think or translate in the back of my mind.  It gave a wonderful feeling of accomplishment.  I certainly am not ready to become a UN simultaneous translator.  I know that I still make many errors, particularly with those pesky German endings (der, die, das, den, dem, einer, eine, eins, einen, einem, etc.) and with that peculiar characteristic of the German language in which one states the complete thought before finally placing the verb at the end of the long sentence.

Our KOF group is a varied collection of high-achievers.  There are several medical doctors, a retired German government official, a teacher, an author of children’s novels, a college music department dean, an anthropologist, etc.  We had interesting discussions about history and politics, including learning about what some of the Germans’ fathers did during World War II.  These were tragic stories.  Germans have certainly confronted and atoned for their sordid history on a national level better than any other country.  Our discussions gave greater interpretive depth to current events in all our countries.  We also discussed Greece’s problems with our two Greek members.  For example, the island of Poros remains relatively immune from Greece’s economic crisis, as long as tourists like us continue to come there.

Naturally, we also discussed current American politics.  It’s very difficult to explain seemingly irrational politics in a rational fashion.  The whole government shutdown drama made no sense to the Europeans.  In comparing our healthcare systems, the Germans scoff at the idea (as many Americans believe), that the US has the best healthcare system in the world.  They ask, how can a system that excludes fifty million people without insurance coverage consider itself world-class?  (Good question!)  They believe that their German system is the best, as exemplified that their health insurance even covers taxi fares to doctors’ visits (since many Germans don’t own cars).  Certainly, I know for a fact that if a German, a Swede, or any other European gets sick in America, they can’t wait to get back to their own countries where healthcare is universal, paid already through taxes (and private insurance), and costs half as much as what Americans (at least those lucky enough to be able to afford insurance) pay.

Our German-American KOF reunion was organized by a Greek member of our group, Dimitrios.  Dimitrios lives in Kiel, but he travels to Greece regularly to conduct Greek language classes for Germans.  By law, German workers receive five paid “professional-improvement” days per year, regardless of the subject.  Some Germans save up their PI days for two years and then take the two-week language course vacation in Greece, organized by Dimitrios.  With Dimitrios’s special group price reductions, our Greek reunion in Poros cost approximately half what it cost us last year in Tuscany, Italy.

I had the pleasure of renewing my acquaintance with one Greek lady, named Zoi, that I had not met in over forty years.  I would not have recognized her if we had passed each other on the street.  Though she looked different, her personality was the same.  Zoi spoke philosophically of the effects of Greek mythology on contemporary Greek mentality.  She cast the basic conflict in society as being between the followers of Apollo, ascetic and serious, and of Dionysus, who was indulgent and pleasure-seeking.  The (Greek Orthodox) Christian church had taken the side of Apollo in this classic conflict.  Although the Christian/Apollo attitude toward life is dominant, the Dionysian impulse is still present throughout society.  This conflict also symbolizes differences between German and Greek mentalities, as conflicts have manifested in the financial crisis afflicting the European Union.  The Germans are (at least stereotypically) very thrifty and hardworking, whereas the Greeks are regarded as more irresponsible and less hardworking.  (The philosophical discussion described above was conducted exclusively in German.)

One day, several of us rented a car to make a day trip to a two-thousand-plus-year-old Greek amphitheater, Epidaurus. It was a great serendipity that this was also the site of the original Asclepian temple, the original healing temple, the first institution formally dedicated to healing, the origin of medicine.  The Greek god of healing, Asclepius, is represented holding a snake.  I had learned previously that this snake symbolizes the physician’s skill.  Snakes can contain poisonous venom.  Yet, in the hands of a physician, poisonous medications can have healing properties.  The snake is still contained in the modern symbolic representation used by pharmacologists. 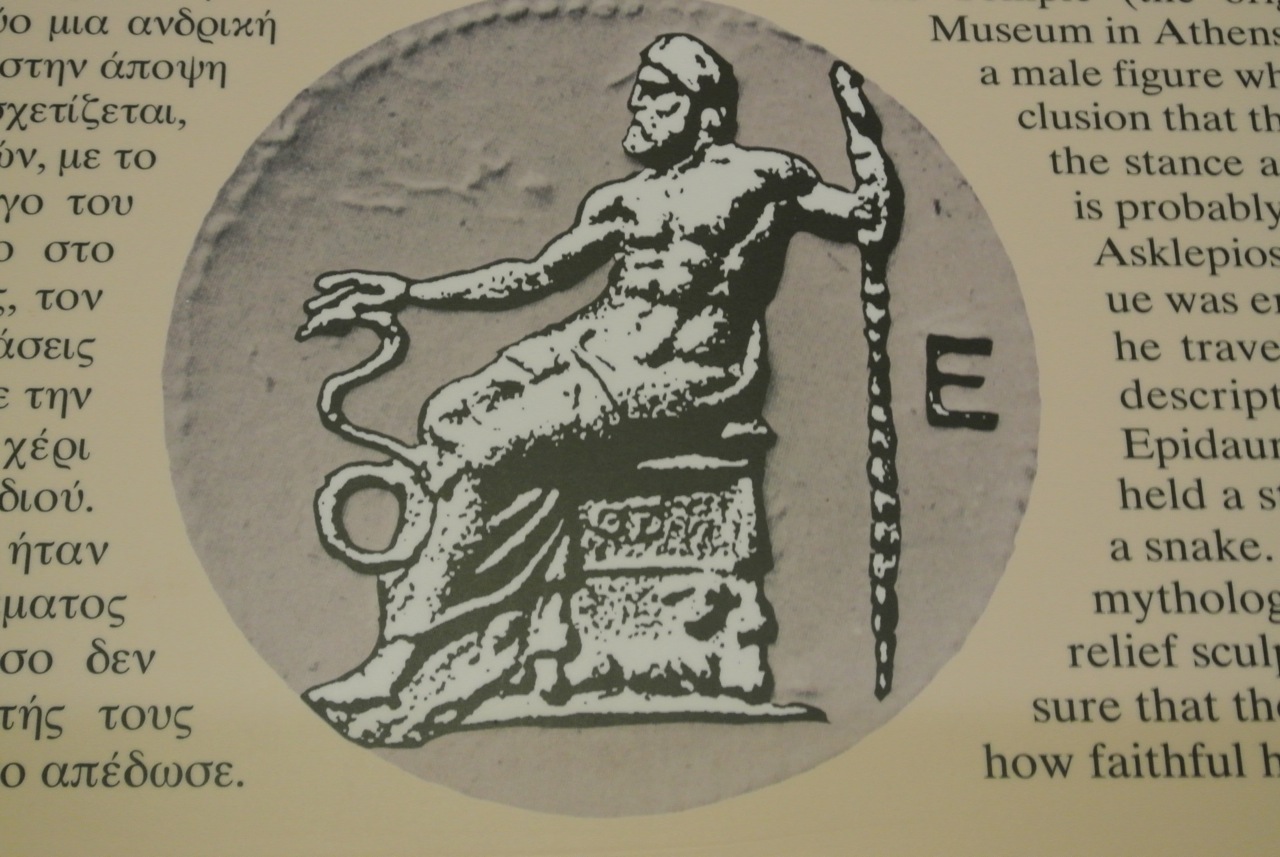 I had always heard (at healthcare conferences referencing the origins of medical practice), that the Asclepian temples had employed music, poetry, and nature as their healing methods, since modern treatments were as yet unknown.  But in the explanations contained in the museum to Asclepius, I learned that the primary treatment method employed was the ritual bath, followed by sleep (perhaps induced by wine or other substances).  While asleep, healing would be delivered by the god of sleep Morpheus, or by Aphrodite Morpho, the female goddess of sleep.  (Morpheus was the name of Samuel L. Jackson’s character in the movie, The Matrix.) 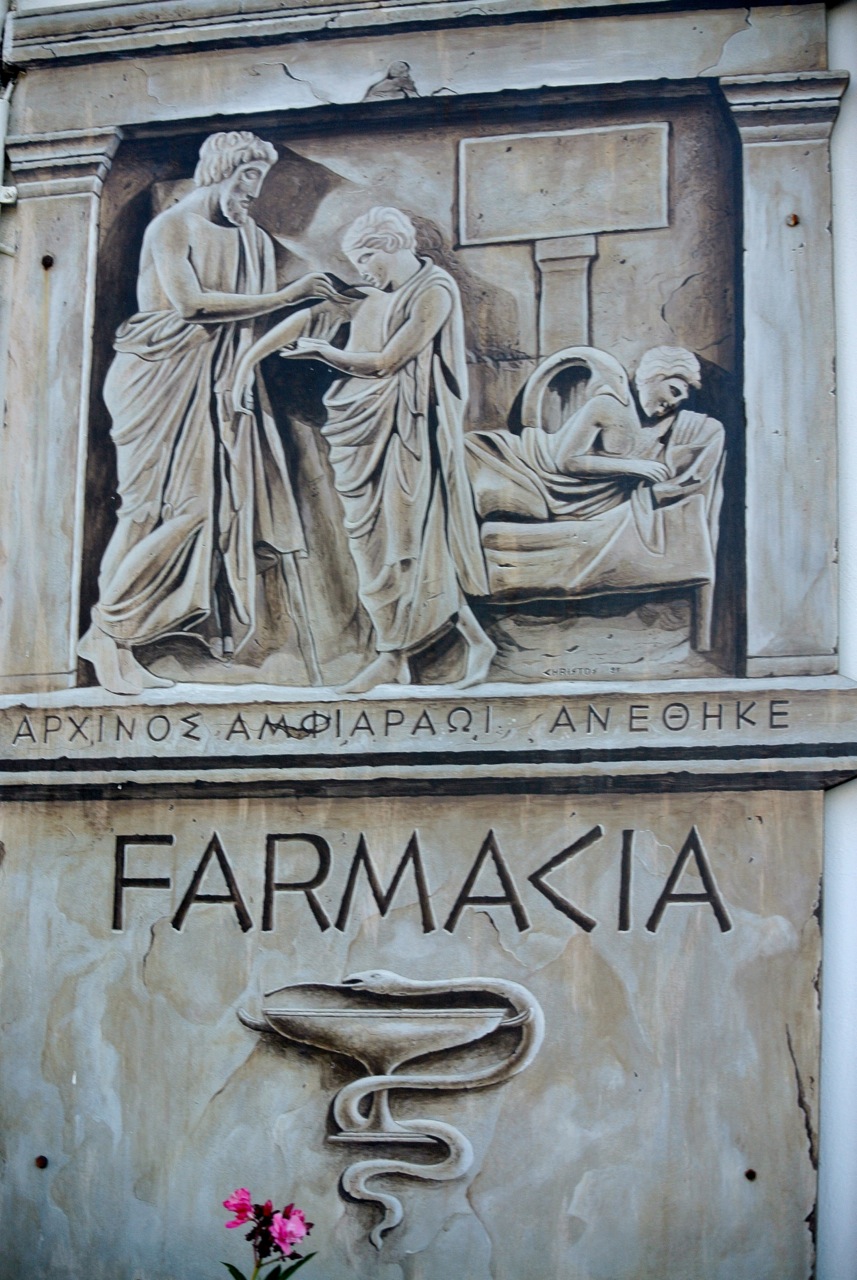 Visitors seeking healing came by the thousands to the Asclepian temple at Epidaurus, which was finished in the year 340BC.  It was destroyed by an earthquake and through neglect in the fourth century AD.  A second Asclepian temple was built beside the Acropolis in Athens, which was also abandoned with the decline of Athens power under the Romans.  It is always a thrill to walk on the stone paths where people walked in their spiritual quests over two thousand years ago.  Greece is a great place to visit for students of history, philosophy, and religion.  Of course, the beautiful Aegean Sea, great food, and wonderful people also add to Greece’s appeal. 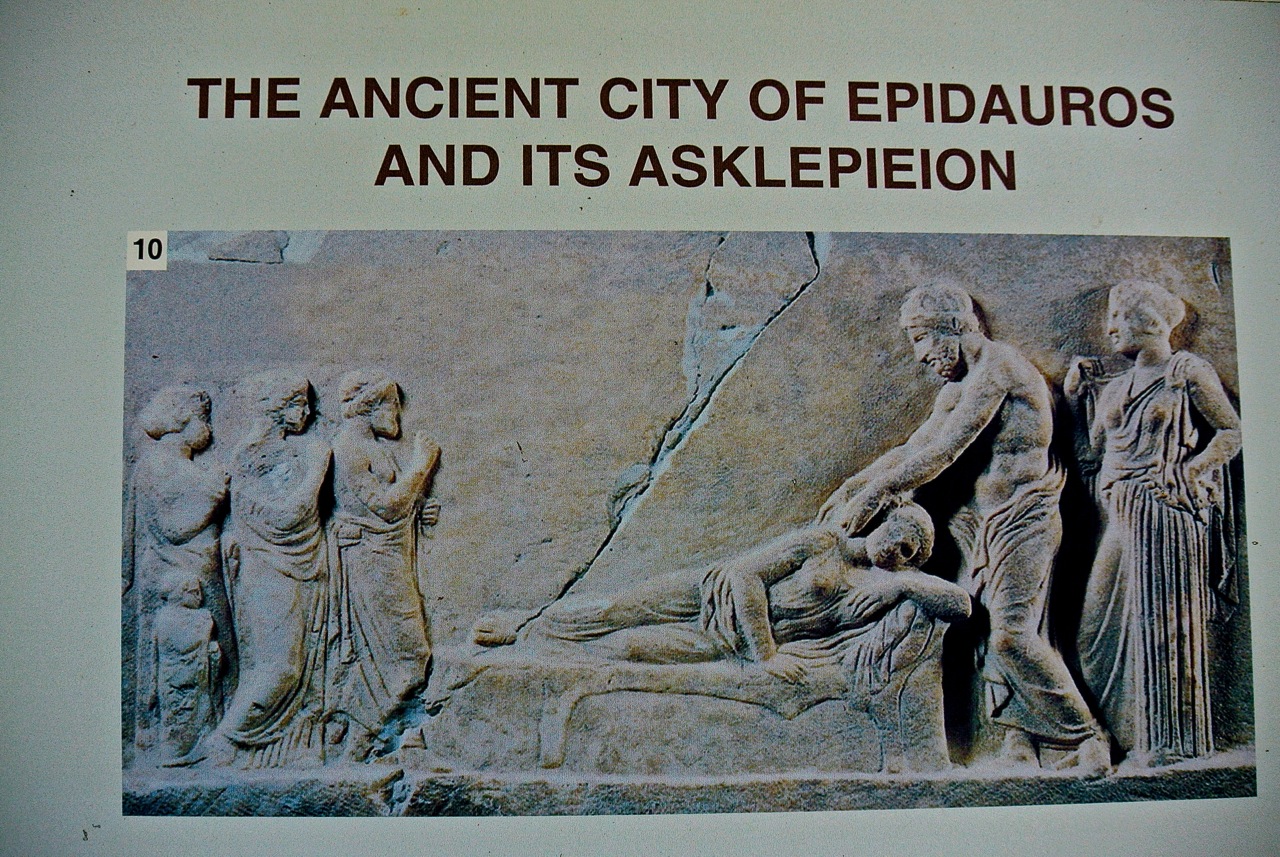