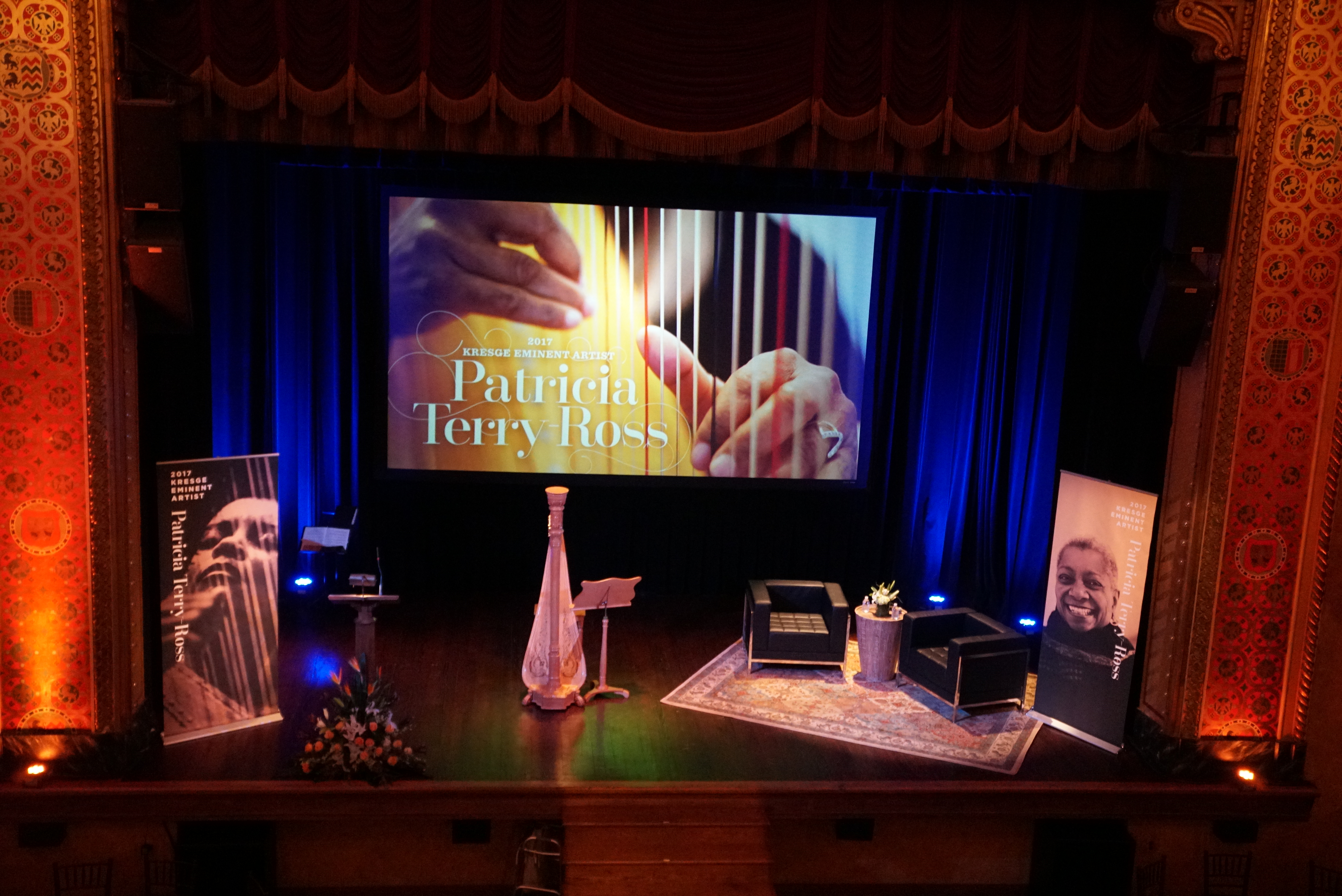 With all the upsetting news of the day, I’m happy to report some great news: the awarding of the Eminent Artist recognition by the Kresge Foundation, accompanied by a fifty-thousand dollar cash award, to our dear friend, Detroit harpist and educator Pat Terry-Ross. The awarding organization is the Kresge Foundation, which has awarded four and a half million dollars to various artists during the last seven years. Susan and I were pleased to be able to fly in to Detroit for the award ceremony. The award ceremony was held in an ornate theater in downtown Detroit, attended by a couple of hundred of Pat’s friends and fans. Pat’s ninety-five-year-old mother was present, as proud as one would expect her to be.

Pat and Susan began harp on the same day at age fourteen. They were students at Cass Technical High School, a technical city wide public high school for outstanding arts and science students in the greater Detroit area. After completing her BA and MA at the University of Michigan and teaching music in the Detroit Schools for several years, Pat was asked to assume the position of harp and vocal instructor at Cass, which she held for over thirty years. Many of her students went on to have professional careers, among them, jazz violinist Regina Carter. (Also of note, the 2015-16 Cass Tech Graduates were awarded over $55 million in scholarships.) All the while she was a Cass Tech faculty member, she taught at Wayne State University, free-lanced with the Detroit Symphony, and backed famous stars at late-night recording sessions for Motown Records.

Prior to the beginning of the formalities of the award ceremony, an open bar and buffet table helped to put everyone in a good mood. The formal ceremony began with introductory remarks and a glowing introduction. Pat came to the stage for a twenty-minute interview by a local radio personality. Besides being the harpist on famous records by Stevie Wonder, The Temptations, and others, she told a charming story of breakfast with Marvin Gaye, with whom she also recorded.

The Motown Records sessions typically occurred between midnight and 3am. Pat was working during the day as a teacher at Cass Tech. On this particular night, there was some technical problem that interrupted the recording session. Marvin Gaye said, “Hey young lady, would you like to go have some breakfast with me?” They went to an all-night restaurant. As Pat told it, Marvin spoke at length about music, philosophy, and other weighty subjects. Meanwhile, Pat nodded and ate her scrambled eggs, thinking: “Here I am having breakfast with Marvin Gaye. What’s goin’ on?” 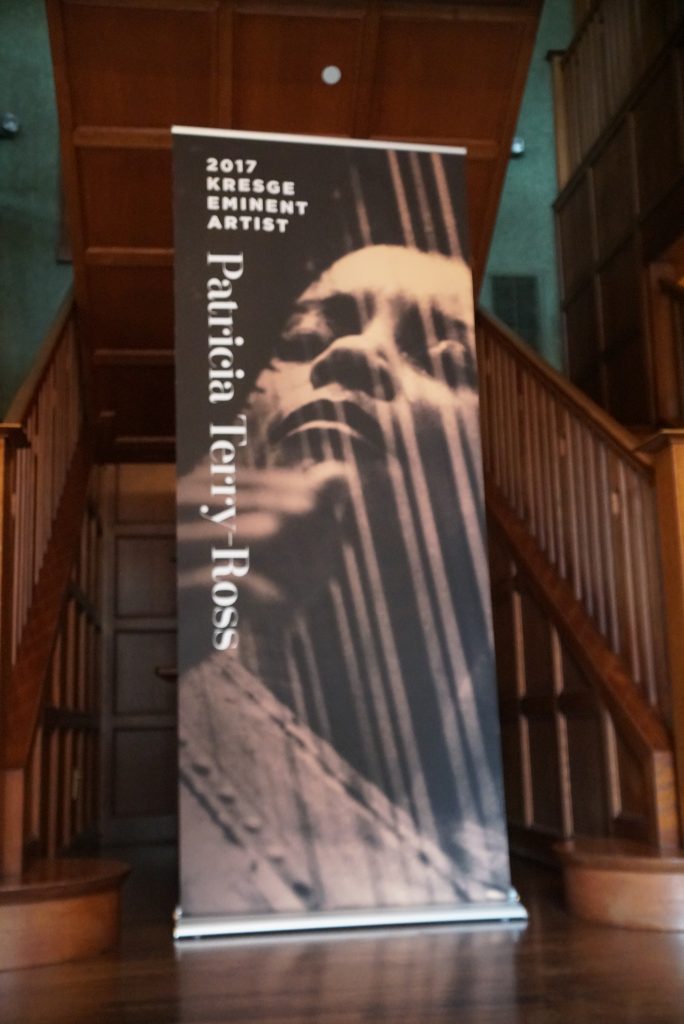 A bit of musical trivia regarding the album containing Marvin Gaye’s hit song What’s Going On: This was the first recording of that era to list the names of all the backing musicians on its album cover. It started a trend in Motown Records which was eventually adopted by other record labels. Pat sometimes hears herself on the oldies radio stations playing the old hits, even if she’s not listed in the credits of many of the earlier albums on which she recorded the harp parts.

Following her interview, Pat moved to immediately sit behind the harp for a performance with a violinist and cellist, of a contemporary composition commissioned by Pat and her two colleagues, for the composer to compose with these three instrumental personalities in mind. It was a beautiful piece, and a fitting conclusion to the award ceremony. The concert hall had played Pat’s recordings and harp albums by some of her students and colleagues as background music for the buffet and drinks prior to the ceremony. So it was only fitting that Pat should “show her stuff” and perform live as part of the ceremony.

Obviously, Pat is an extremely disciplined and dedicated musician. I had heard the trio’s rehearsal the day before the ceremony. In addition, Pat had continued to practice the piece on her own on both the morning and afternoon of the evening ceremony. Professional musicians make extremely difficult music sound easy, based on their extensive rehearsals and personal discipline. Pat is a true professional, and it was wonderful to see her receive the recognition that she deserves.

In the same month as this wonderful recognition, the tragic events of what is known as either the Detroit Riots of 1967 or the Revolution. The bubbling pot of hate stemmed from a history of police brutality in its treatment of African Americans. Forty-three people died and thousands of homes were destroyed. The years following the riots were marked by “white flight”, the abandonment of the inner city by the whites, leaving the city with a generally poor and overwhelmingly black population. The city’s population shrank from one and a half million to only seven hundred thousand. The tax base was drastically reduced, leaving the city unable to rebuild and straining to provide vital services. There are still many boarded up vacant houses that make some parts of Detroit resemble a war zone. 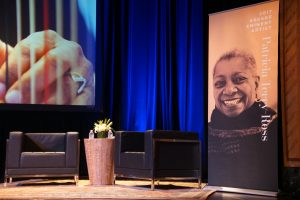 The persistent racism that led to the riots is represented in the movie, Detroit, which is in current release. Undeniably, race relations have tremendously improved during these past fifty years. Yet, recent events have reminded us that the country still suffers from this disease. From its racist history, Detroit has become something of a model for the revival of the inner city that thrives on the basis of racial harmony. And, with renewing Detroit, the arts community has served as a model. The Detroit Institute of Arts is now owned by a private non-profit and is thriving, as is the Detroit Symphony. The Detroit/Montreux Jazz Festival is world renowned.
The Kresge Foundation Eminent Artist award is an outstanding example of Detroit’s revival. Congratulations Pat! 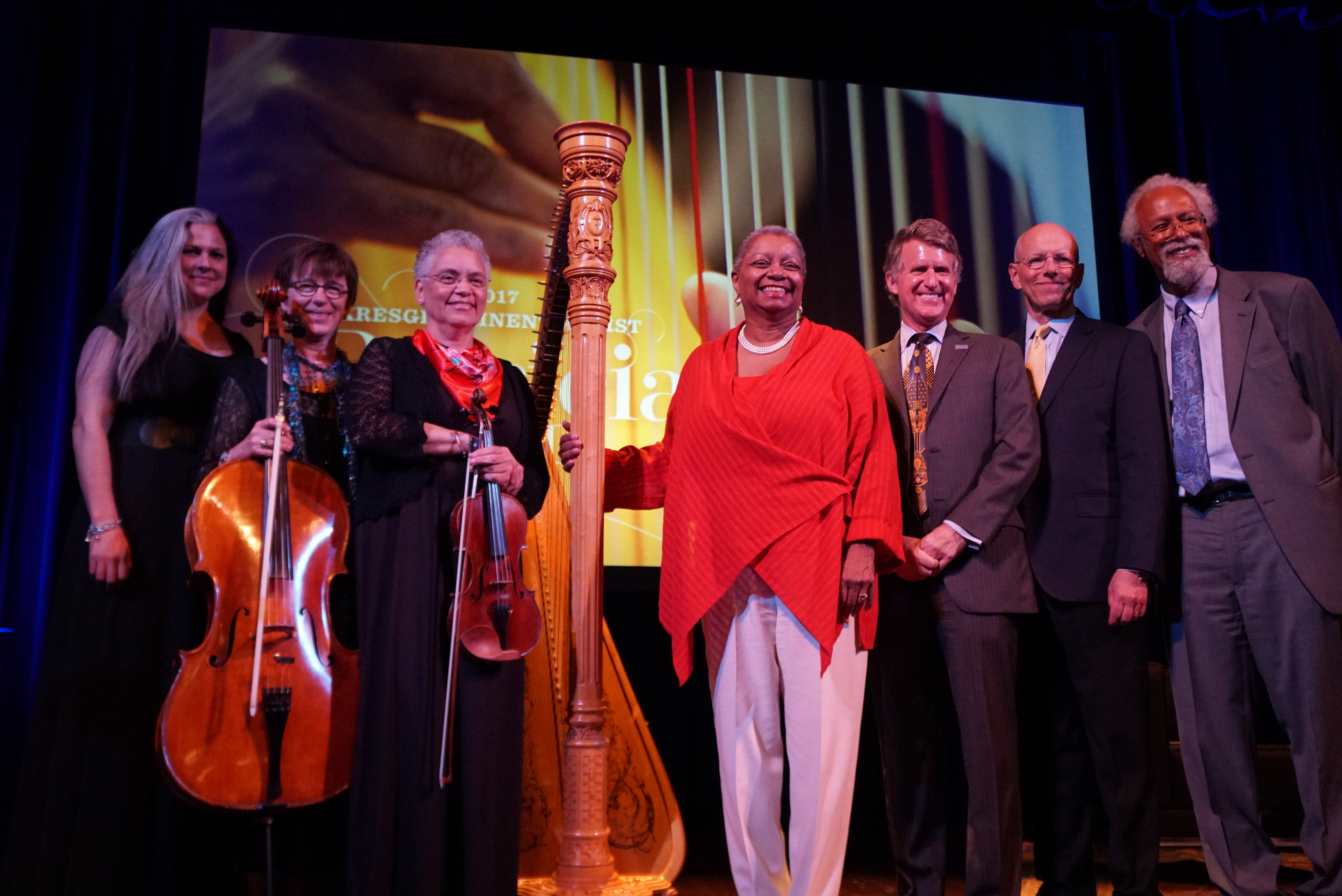