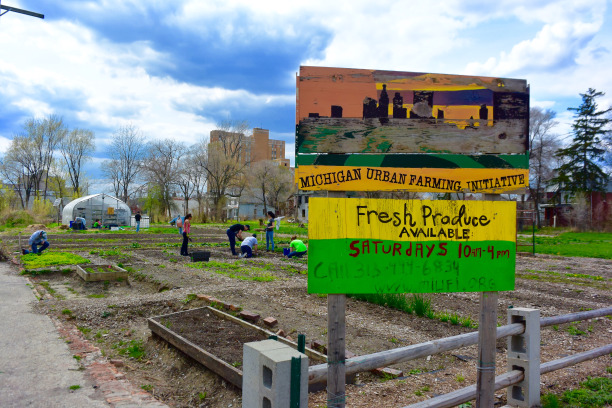 The short tragic history of Detroit is that race riots in the late sixties caused “white flight”, drastically lowering the tax base and precipitating the relocation of major industries away from Detroit. The lack of jobs led to a reduction in Detroit’s total population from over two million to the current 700 thousand. At its worst there were approximately thirty thousand empty, burned out houses. Many have been torn down enabling the establishment of municipal gardens, which supply many of the new upscale restaurants with fresh organic vegetables.

The Detroit Institute of the Arts is a unique world class museum. Besides its extensive and varied collections, perhaps the most striking single feature is the large room which houses the Diego Rivera murals commissioned by Edsel Ford at the height of the auto industry’s position in Detroit high society.

Rivera’s wife, Frida Kahlo has gotten increased attention of late. Her expression through her art reflective of her personal crises foreshadowed today’s selfie culture. She also foreshadowed feminist art in the sense that she presented realist feminine characters of all ages.

Diego Rivera was an avowed communist. His magnificent murals in the DIA provoked some critics to propose painting over them. In fact, at another of his murals commissioned in New York, Rivera painted Lenin’s likeness in the “peace” section of the mural. Hisenemies succeeded in having Rivera’s artistic masterpiece destroyed. This is exactly the American counterpart to ISIS destroying cultural treasure in Syria.

Music is almost always best heard live as opposed to in recordings. The Detroit Symphony made its program of Britten, Mozart, and Schumann sound better than I had previously ever heard these pieces either in recorded form or live. This is the sign of a great symphony. I love all my friends in the Reno Philharmonic. But I am very sensitive to imperfections in orchestral tuning and execution. I can never fully relax while listening to the Reno Philharmonic, because I am distracted all too often by individual errors and ensemble inconsistencies. I could totally relax and bath in the sound of the orchestra while listening to the Detroit Symphony in its magnificent old concert hall.

Mayo Clinic is a fantastic integrated medical system. It doctors work on salary in what is effectively a large group practice. Due to the close integration and cooperation across specialties and departments, comprehensive diagnosis testing can be completed in a much shorter time than the usual fragmented situation on the open healthcare market, where separate appointments must be made for different tests from which results are often very slow in coming.

I’m proud that Mayo Clinic has had our CARE Channel for a number of years. Its broadcast extends into the neighboring institutions such as Charter House, the eldercare facility which is home to our friend Bani. Susan and I really enjoyed watching it in our guest room. We left it on for hours, just like patients in the medical center do.

Mayo Clinic seems modern and progressive in every way. There are regular concerts in one of the clinic’s large atriums. There is an abundance of art in the long hallways, including a series of Andy Warhol’s reproductions.

http://www.mazerandsmith.com
We Are All the Patient Experience
Reflections on 9/11 and a Significant Birthday