Detroit: The beautiful and the ugly

This essay was written in March, 2008, with reflections on visiting Detroit and living in Reno, Nevada.

Taking off from the Reno airport, climbing over the desert…over the dry bed of prehistoric Lake Lahontan…over the mountains of Nevada, then Utah and Wyoming…snowy peaks visible between the clouds.  Landing at Chicago’s Midway Airport, it’s amazing to see the rows of houses, most built in that certain Midwest style completely unlike any houses out West.  Taking off from Midway at dusk, the streets of Chicago reminded me of a gigantic printed circuit board.  The large checkerboard grid of neighborhoods were perfectly laid out and symmetrical, marked by occasional bright diagonal cross streets.

By way of contrast, Detroit’s airport is surrounded mostly by farmland.  The fields and farmhouses were white with snow.  Rural Michigan belies the gritty realities of the inner city.  The rolling fields near the airport quickly gave way to suburbs, industry, automobile factories struggling to survive, a glitzy collection of skyscrapers next to the river, opposite Windsor, Ontario (the only place where Americans travel south into Canada), and to our ultimate destination, the small independent town of Highland Park, located adjacent to Detroit. 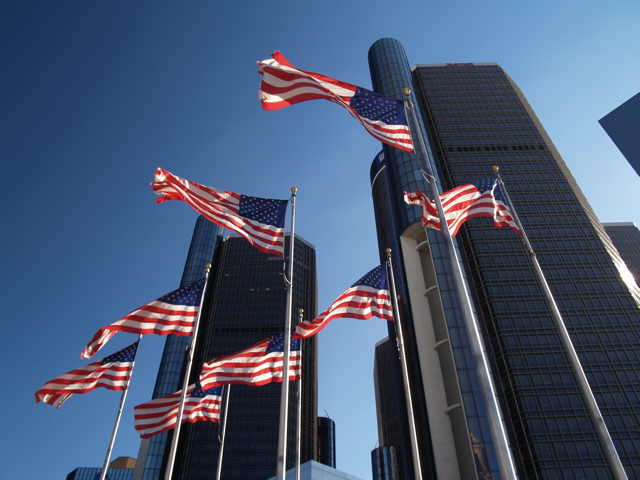 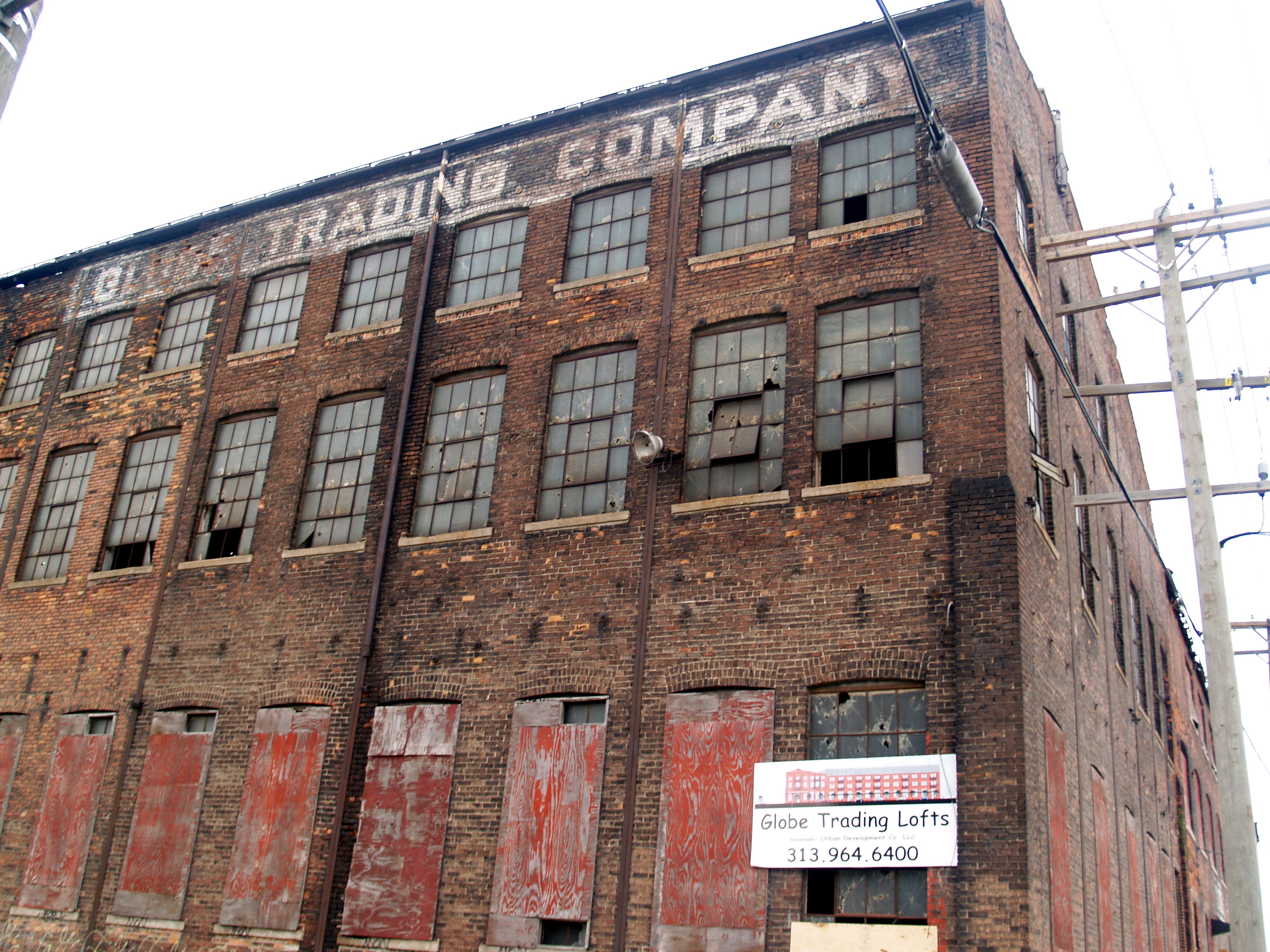 Detroit, at this point in time, is perhaps the country’s most economically depressed city.  It has the highest rate of unemployment and house foreclosures in the country.  Detroit’s problems reached their peak in 1968, when some of the worst race riots in American history resulted in blocks of burned out buildings and many deaths.  A major consequence was “white flight”, which reduced the tax base and delayed rebuilding.  In fact, there are still many burned out houses, which have never been rebuilt.  It reminds me of burned out World War II buildings still present in Berlin in the early 70’s. 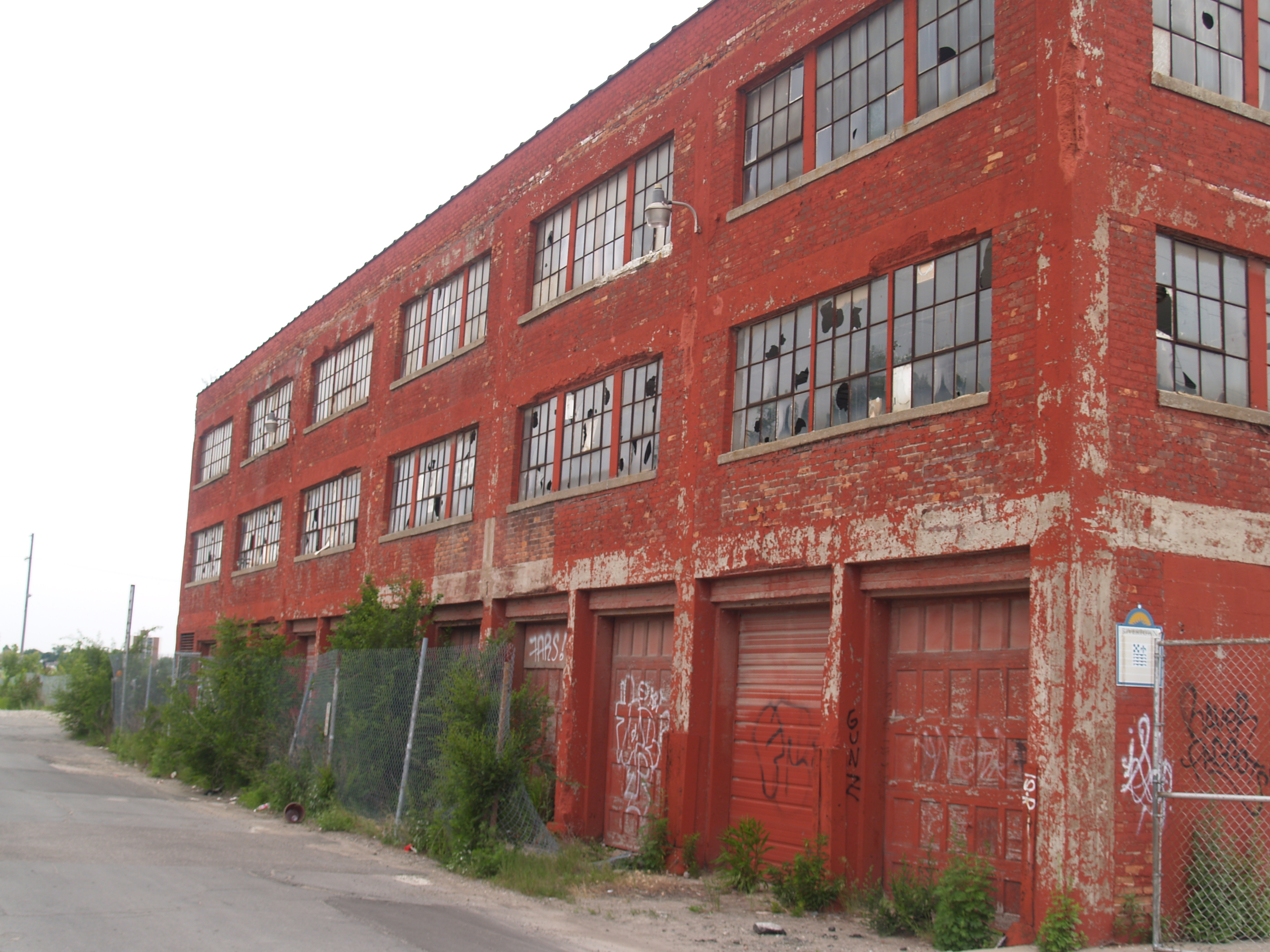 Mostly black Highland Park is a poor relative to Detroit.  It’s heyday was when The Ford Motor Company had its main factory for building the Model-T Ford.  At some point several decades ago, the Ford Company simply closed the factory and left town, to open newer factories in other communities.  The closed and deteriorating factory has been a vacant eyesore for as long as most people can remember.   Just one block from where we stayed with our good friends Pat and Frank, there are several blocks of what must be termed “urban blight”.  Streets are lined with some burned out houses, some new but vacant (and deteriorating) homes which most recently housed Hurricane Katrina refugees, and finally a few poor rundown houses probably inhabited by mostly transient renters. 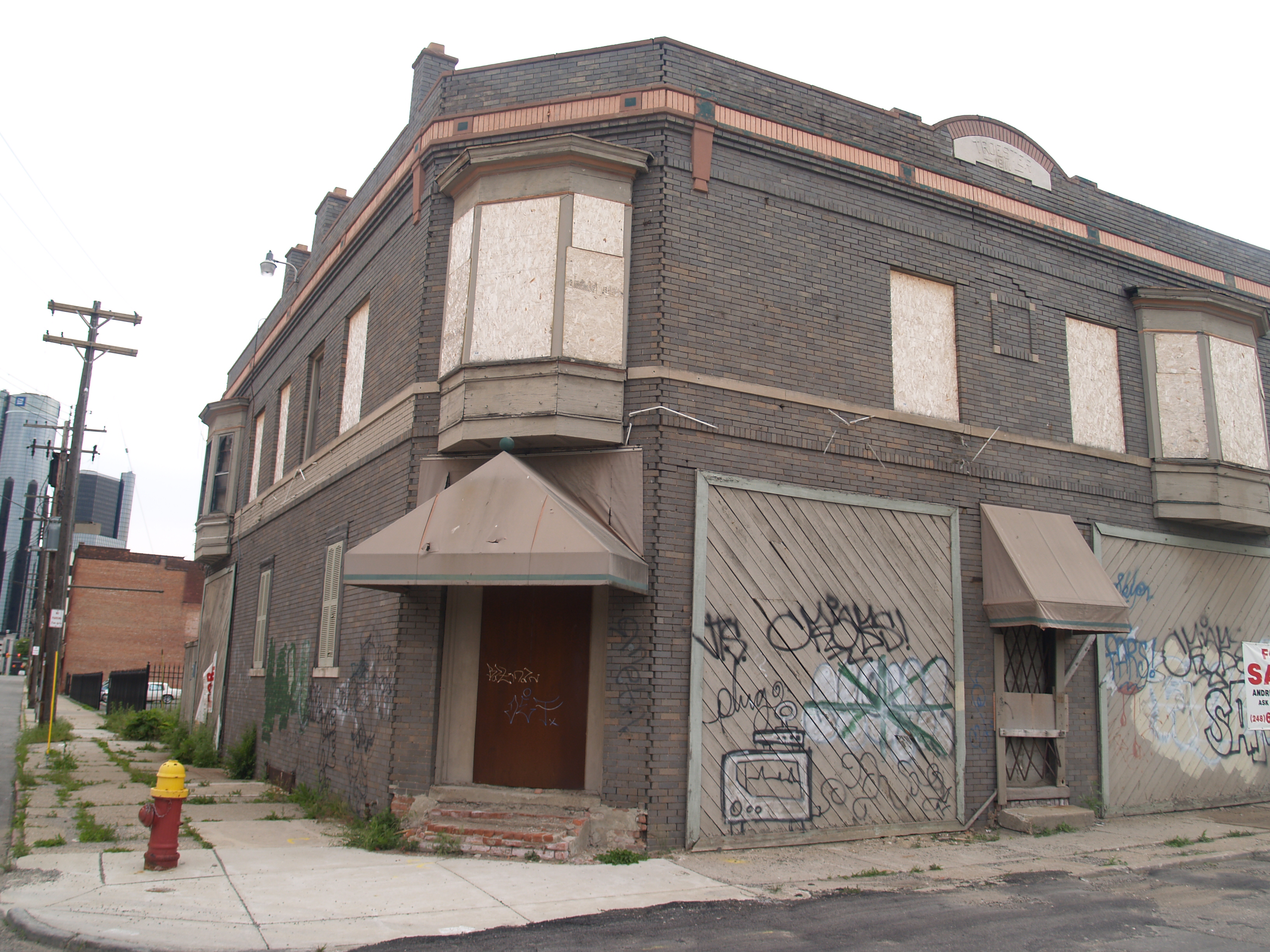 On the other hand, our friend Frank Ross, who currently works for the county and was formerly a member of Highland Park’s city council, says that Detroit is “coming back!”  The same positive sentiment is expressed by our friend, Harriet Saperstein, former executive director of the Highland Park Development Commission.  If anyone can facilitate a plan to restore the old Ford factory, it will be Harriet.  Great work is being done by such longtime Detroit residents who have dedicated their lives to rebuilding this community.  Thus, there are many great restaurants, a vibrant music scene, a river redevelopment project, bike trails, a “people mover” elevated railway, and most recently, huge new urban casinos.  Nevada comes to Detroit.

As I write this on March 10, the big news story of the day is of NY Gov. Elliot Spitzer’s sexual indiscretion.  He supposedly spent thousands of dollars for high-priced prostitutes.  President Bill Clinton’s encounter with Monica Lewinsky had similar disastrous consequences.  However, Detroit Mayor Kwami Kilpatrick’s current scandal dwarfs Spitzer’s and Clinton’s.  The scandal began when the mayor had an affair with a female staff member.  Emails posted on the city government mail system were released by the court in which the mayor and his lover discussed firing certain police officers.  These officers sued the city of Detroit for wrongful termination plus damages.  In the course of the trial Mayor Kilpatrick made a secret $8.5 settlement deal with the officers, using public money to keep the emails secret and to keep the officers’ mouths shut.  Unfortunately for Kilpatrick, someone leaked the story to the local newspaper, the Detroit Free Press, which went to court to force public release of the incriminating emails.  The mayor hasn’t resigned yet, but (as in Spitzer’s case) the court system could prosecute, thus forcing the mayor from office.

The impetus for our trip to Detroit was to attend the 80th birthday celebration of Susan’s former harp teacher, Liz Ilku.  She threw a great party for herself…In Liz’s words, there’s nothing better than good wine, good food, good music, and being with good friends.  Liz danced, she tells great dirty jokes, she related stories of the many famous conductors she played for as harpist for the Detroit Symphony for thirty years.   She is the harpist heard on all the DSO’s recordings from 1968-98, under conductors Paul Paray, Sexton Ehrling, and Antol Dorati.  Prior to her DSO days, Liz was a member of the Angelaires, a musical group consisting of six young female harpists.  They performed live on the Ed Sullivan show, among other triumphs.  Susan and I helped Liz recently to release an archive LP recording of the Angelaires on CD.  (Call Healing HealthCare Systems to order your copy.)  Liz is eighty, with the mentality of a thirty year old…very inspiring.

Perhaps the majority of Liz’s party guests were her former colleagues from the symphony.  I played with the band, a great jazz piano trio led by Cliff Monear, a Detroit performer who recently joined the faculty of Wayne State University.  I was slightly self conscious because I would be playing for my occasional flute teacher, Erv Monroe, who is in the midst of his final season with the Detroit Symphony after being a member for forty years(!).  I’m sure that the adrenaline of performing for such an esteemed group of professional musicians helped elevate my performance level.  One of Liz’s other friends who sat in with the band was an excellent jazz tuba player.  I’d never played with a jazz tuba player before.  Good musicianship transcends the apparent limitations of any instrument.

I’ve been lucky enough to do lots of traveling in recent months…Germany, the Czech Republic, India, Alaska.  Next week I travel to Sweden for a three week tour with Mynta.  These travels lead me to the following musings:

Every travel destination is like a different movie…people involved in their personal lives, their professions, coping with their local environmental issues.  I catagorize lifestyles into three basic divisions:  urban, small town, and rural.  Reno is definitely small town, about the same size as the town where I grew up, Columbus, Georgia.  Detroit (like Berlin, Stockholm, and Delhi) is definitely urban.  The means there is a high population density that breeds stress, anonymity, and professional specialization.  It is this specialization that gives rise to the best musicians, the best restaurants, the best and the worst of our culture.  In the big city, one travels from point to point, dreading having to go out during rush hour, and not enjoying the scenery.

Reno is proud of being known as the “biggest little city”.  It’s certainly easier to live in than Detroit or any other major urban area.  It’s relatively quick and easy to drive anywhere in the city.  Rush hour in Reno means a delay of perhaps ten minutes.  It’s easy to run into someone you know at the store or around town.  Indeed, it feels unusual not to run into someone you know when out and about.  Prices are relatively low.  And some of the country’s most beautiful nature is only a short drive out of town.

Finally, there is the rural lifestyle.  Since I spent lots of time growing up in the wilds of Alabama (not far from Columbus), I know the rural lifestyle well.  My father was an early “survivalist”, so I learned to consider how I would survive if I were forced to “live off the land”, meaning grow my own food, hunt, fish, etc. Thus, when I travel in a rural area, whether in the US, Europe, or India, I first try to imagine what the land was like prior to being settled by anyone.  Then, I look for agricultural potential.  I observe how the natives (of whatever nationality) have developed their specialized local crops.  This helps me to appreciate the local cuisine of wherever I am.

Why I live where I live

I could live anywhere for awhile…I like cities, small towns, and the wilderness.  But after the vacation wears off, I prefer the amenities of urban life.  (After ten years of living in the small town of South Lake Tahoe, California, Susan and I appreciate the amenities found in Reno, the “biggest little city” of this local area.)  It’s also nice to attend concerts, to come in contact with different nationalities and types of people, and to be able to shop almost anytime for anything.  And of course, it’s nice to vacation close to nature, whether in the mountains or at the beach.  But ultimately, I would need more intellectual and cultural stimulation than rural vacation life provides.

When I was a kid on the farm in Alabama, I was asked if I liked to fish.  I supposedly replied, “Yes, when there’s a fish on the hook!”  Otherwise, I’m bored.  Even though I grew up close to nature, I don’t have the patience necessary to be a farmer, a recluse, or to “live off the land”.  As long as modern society survives (with its affordable utilities, food distribution, easy mobility, entertainment, and educational institutions), hopefully none of us will ever be forced to live so close to nature, to create our own food, to live without those big city luxuries.  That would be beyond boring…