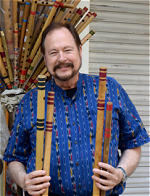 Born in Columbus, Georgia, I began my musical studies in the 6th grade on a song flute and he studied clarinet with George Cardino through high school.

A scholarship student at Florida State University, I studied with Harry Schmidt until I took a year abroad to study languages in Germany. Once there, I remained abroad, spending one year in Germany and subsequent years in Sweden and Afghanistan.

During these years, three critical musical milestones occurred for me: I began playing the flute, moved over to the jazz world, and began my love affair with East Indian Classical music on the Bansuri, the bamboo flute.

Upon returning to the U.S. after over three years abroad, I moved to San Rafael, CA, to study with Indian Music masters Ali Akbar Khan and G.S. Sachdev, and jazz saxophonist Pee Wee Ellis.

As diverse as my musical interests were, that is how wide I ventured into the world of jazz, world music, and fusion. The result was that I performed in the U.S., Europe, and India — becoming known as the finest woodwind performer to achieve virtuosity in each of my musical passions.

I move easily between the inspired and fluid world of meditation, the complex and exciting rhythms of Indian fusion, the complex world of jazz, and my own compositions, which blend all of them.

In addition, I’m also a pioneer in the performance and development of the electronic wind synthesizer, having naturally expanded my interest to the newer technologies that allowed me to move around all musical genres with unprecedented creativity and expertise. In 1984, I recorded my first solo album, “Stellar Voyage,” and met Susan Mazer, when I collaborated on her first album, “The Fire in the Rose.”

In my performance and recordings, I easily move between the silk melodic quality of the flute to the sensual richness of the saxophone and clarinet and on to the magic of the electric wind instrument. My melding of East Indian, jazz, and classical music make my performances and compositions refreshing and enticing.