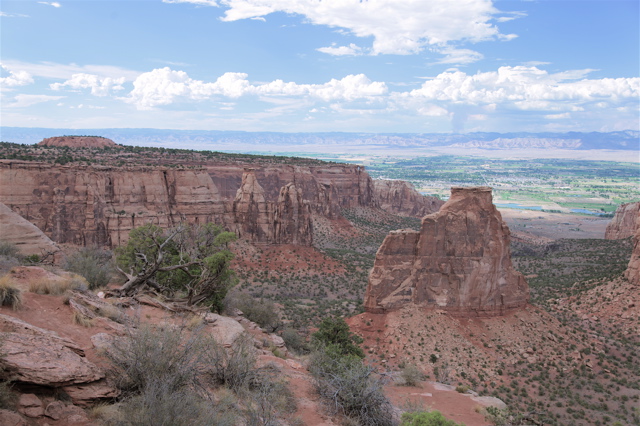 Susan and I have known Dr. Jean Watson for more than a decade.   My wife Susan actually met her on email, having been referred to her by a couple of her prior ND (Doctorate of Nursing) students who had become leaders in their own organizations.   What was most exciting about her work, even so long ago, was that she had developed the Science of Human Caring, a nursing theory that expanded on the work of Florence Nightingale in holding nurses accountable for creating sacred spaces in which patients could recover, for holding the relationship between nurse and patient as one that itself needed to be therapeutic.  Of course, our attraction to Jean and her work is because it is also our work, albeit entering through a different door.

We learned many more details about her during a tribute dinner on the occasion of her retirement from the University of Colorado after 39 years of tenure which included her role as Dean of the School of Nursing, Distinguished Professor and the holder of the only endowed chair in Nursing in the country.  She had also founded the Center for Human Caring and had birthed the first doctoral degree in nursing which evolved into the current recognized Doctorate of Nursing Practice (DNP).  We learned that Jean has authored 17 books, written numerous articles, been the faculty reader for many doctoral theses, and mentored countless nurses now working around the world.  She holds ten honorary doctorates from universities around the world.  She is a pioneer in elevating the nursing profession to its full potential of reviving its traditional core value: caring, the heart of nursing.  Her theory of human caring has generated solid research and the Swedish Journal on Caring Science.

After a long string of personal and sometimes tearful tributes from friends and professional associates, Jean finally came to the podium to say a few words.  She began by saying (my personal paraphrase), “I am not a saint.  I didn’t know what I was doing.  I just made it up as I went along.  I followed my heart.  But it’s all of you who deserve the credit for embracing the vision that I’ve promoted.”

Jean has experienced dramatic traumas in her life, including the loss of one eye in a freak accident with a grandson swinging a golf club, followed by the loss of her husband.  Susan and I met her not so long after these traumatic events.  We recorded a backing soundtrack for some personal “psalms” which were one way that she coped with her losses by turning her grief into a most creative process.

At the end of this day, I simply am in awe of this person who, through her personal vision, creativity, and dogged perseverance, has improved healthcare around the world.  In her vision, nurses are the natural leaders to spread peace in the world through healing.  Three years ago, she founded the Watson Caring Science Institute (WSCI), which sets up conferences internationally and is developing a nursing coaching certification based on caring science.  Jean’s retirement from academia, then, is a step in a future that will allow her to do more with her own Institute.  She will continue to develop her work, now referred to as the Caristas Processes, continuing to write and publish, and to inspire nurses everywhere.  Congratulations Dr. Jean Watson!

Deepak Chopra is an amazing intellectual.  Following a medical education and great business success, he has authored 67 books, with the general goal of “expanding consciousness.”  I heard him speak live almost two decades ago.  Since that first experience, I read one of his books and have frequently seen him be interviewed on television.  He has a unique way of weaving words to express amazing cosmic ideas.  For example, one quote of his I remember is: “Life is a sexually transmitted terminal disease.”

Chopra was the keynote speaker for the Caring Science Conference.  The beginning of his talk was a discussion of the limits of science.  Science views the human body as an anatomical construction, consisting of various component parts and elements that are subject to research, both separately and in combination with each other.  According to the traditional “scientific” approach to health, disease is a condition that usually begins by afflicting one or more parts of the body, determined by the interaction of chemical elements that comprise our physical bodies.  Certainly, many physical conditions or ailments can be understood or explained by this conception of the human body.

But science then comes face to face with its limitations as illuminated by the following questions:  Where is consciousness located?  What is the source of imagination?  How does the eye see color, for example green, when all the eyes do is to transmit an electrical signal to the brain? How do we know that different individuals are seeing the same “green” and not something completely different from what I see as green?  Where do feelings reside?  If I ask you to picture a mountain, where does that image of a mountain reside in your brain?  Where does it go when you stop thinking about it?

From the scientific point of view, the only available tools to answer such questions are speculations about the interactions of synapses, peptides, and electrical charges in the brain that turn a connection on or off.  Trying to answer these philosophical questions is the equivalent of trying to analyze music by disassembling the amplifier and speaker system.  Where is the music?  Why do different people perceive the same music differently?

Chopra’s definition of life is interesting.  He says that life consists of three elements: “stardust” (i.e. basic elements created during the “big bang”), an assembly on the space/time continuum (i.e. a physical structure that exists, grows, and evolves over time), and an energy field (aka soul, spirit, life, awareness, etc.).  This definition covers all forms of life from viruses to elephants to trees to humans.

Chopra then considered the nature of consciousness.  Consciousness is a philosophical construct.  Animals have consciousness…they are just conscious of different things.  Is consciousness strictly a function of the brain?  What about other organs…the heart?  Our skin?  Our gut (source of “gut feelings”)?  Do our cells have memory?  Where do instincts come from?  Where are they in the brain/body?

Chopra sees consciousness as an all-encompassing system.  When I interact with you, together we create a larger consciousness than either of us alone, even if our interaction is displaced on the space/time continuum, as through the internet.  We are not aware of our “consciousness” at all times.  Indeed, we rarely think about being conscious…we simply are conscious beings as long as we are alive.  Groups create their own group consciousness.  Same for nations…eventually, the whole planet earth is a unique consciousness system.  Our brain waves are radiating around the planet just like radio waves.  We just can’t see or measure them by conventional scientific instruments.

This is analogous to “dark matter” and “dark energy”.  Astronomers and physicists tell us that a large part of the universe is composed of dark matter and energy.  But no one has actually seen these phenomena.  The existence of these dark matter and dark energy is the only way to mathematically explain how the universe is expanding.  Yet, dark matter and energy don’t exhibit the same characteristics of responding to light and mass measurements as visible matter.  This is a big subject, and I realize that my short summary is insufficient to convey the sophistication of Copra’s 90-minute narrative.

Another question is:  What happened in the time before the Big Bang (the explosion that marked the creation of our known universe, estimated at approximately 14 billion years ago)?  There are billions of galaxies consisting of trillions of stars.  Measuring the movement of the most distant galaxies reveals a “red shift”, indicating a lengthening of the visible light waves, which means that these distant objects are accelerating away from us at an exponential rate.  Will they ever slow down and reverse directions to eventually create the opposite of the Big Bang, the Big Crush?  What happens after the Big Crush?  Another Big Bang?

Here is one of Chopra’s most far-out ideas:  A scientific analysis of the nature of the universe is strictly materialistic in nature.  Science loves things that can be observed and precisely measured.  Science has no way to measure love, joy, sorrow, creativity, pain, sentimentality, and all the other characteristics that make us human.  If science can’t measure something, in scientific terms, that thing doesn’t exist.  Chopra turns this system on its head…If consciousness is an all-encompassing system, then it is our consciousness that, by becoming aware of the world around us, wills the universe into existence.

Nobody has ever seen an electron, a proton, a neutron, or any other of the theoretical building blocks of the universe.  Smart scientists have “thought” these particles into existence, such that we accept their existence, despite never having personally seen them.  Most recently, we have the “discovery” of the Higgs-Boson particle, the “god particle”, that is theorized to be the sub-particle/energy wave that is the glue that holds atoms and the universe together.  Mind you…this is all a theory that many of the world’s leading physicists have spent billions of dollars trying to confirm its existence.  Is this a product of human consciousness, or does it exist independently of consciousness…that is, is the Higgs-Boson particle just a dumb thing that’s very small?  Did god create/discover the god particle? 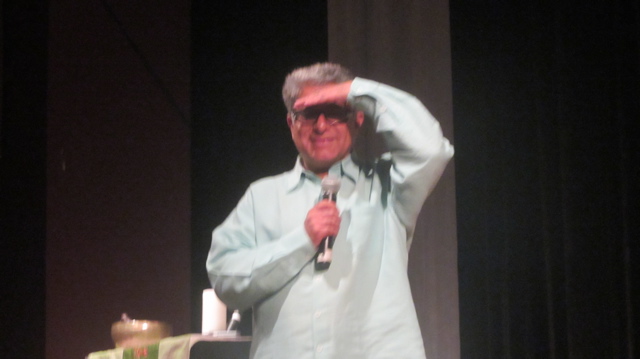 In the company of intellectual giants…

The paragraphs above are my crude interpretation of Deepak Chopra’s very sophisticated “stump speech”.  I don’t claim to understand everything of what he says.  During the tribute to Jean Watson, many of her students confessed that they hadn’t really understood what Jean was talking about much of the time.  But they loved listening to her.  People love listening to Chopra in the same way.  He is so intellectually gifted that he is able to traverse the highest circles of the world’s philosophers, religious leaders, and politicians.  Jean Watson is on the same high level in her specialized domain, i.e. nursing theory.

I loved being on the staff of this conference.  I loved the fact that Susan and I opened the conference proceedings every day with an original musical improvisation.  The workshop that we did was well-received and the presentation Susan did prior to Deepak Chopra and Joan Borysenko was a stunning bridge from theory into practice.  We are the experts in our specialized domain of using music and nature to create a healing environment.  We are also composers, improvisers, and performing musicians, which allows us to bring magic and spirit into the often overly intellectual dialogue about transforming healthcare. And it is gratifying to receive the applause and comments of appreciation for our contribution to the conference.  The most fun thing is to try and absorb the wisdom and learning from the high-level intellectuals that attend fantastic conferences such as this one.