I had visited Switzerland only once before in 1973, driving my VW van with my parents, when they came to Europe to persuade me to come back to the US after I had stayed out of the country for three years. By that time, the Vietnam War was winding down, and the military draft was soon to be abolished. That was a turbulent time in my life, and my memories of my Swiss visit from that time are vague. So following my parents’ visit, I did return to the states and didn’t travel to Europe again for another eleven years.

Forty-five years later, I have much more travel experience to draw from in visiting Switzerland again. I had some trepidations as to whether I would be able to understand the Swiss-German dialect. But our hotel hostess explained that these days Swiss people immediately switch to High-German (Hoch Deutsch) or English when they speak with foreigners, since they know that no foreigner is likely to understand the Swiss-German dialect.

When I was in Pokhara, Nepal, several years ago, my Nepalese friend, Shashi, took me to a museum, where there was an exhibit comparing Nepal to Switzerland as they were a century ago. The mountain landscapes looked very similar. The cattle wore bells around their necks so that they could be easily located in the high mountain pastures. The women wore similar exotic traditional costumes. The implication of the Nepalese museum exhibit was that Nepal has the potential to become an Asian version of Switzerland. Switzerland has undergone tremendous changes in the last hundred years. Nepal, not so much.

Switzerland has a long tradition of neutrality in its foreign relations, such that it has not been involved in a war for over two hundred years. It maintains a citizen militia, having a compulsory military service, which requires that citizens retain their weapons at home in order that they might be ready to quickly rejoin the militia in the case of a military conflict.Swiss neutrality extends to the banking industry, in which there is an institutional privacy policy which has made Switzerland the favorite country for dictators, mafia bosses, and other questionable characters to hide their ill-gotten riches. They will accept money from anybody. Switzerland has benefited from the profits derived from sheltering huge foreign deposits, but this also earns them contempt from many of their neighboring countries, who have tried unsuccessfully to prosecute criminals and politicians who have hidden their stolen wealth in anonymous Swiss bank accounts.

Besides being a financial center, Switzerland is famous for producing half the watches and clocks in the world. Prices range from $50 to $50,000, so there is a watch for every budget. How much is the measurement of time worth to you? (Nowadays, checking our cell phones has replaced looking at our watches.)

Switzerland is famous for its pharmaceutical companies, such as Beyer, Novartis, Sandoz, Hoffman-La Roche, and many others. The Swiss machine-tool industry is also a world leader.  Swiss chocolates and Swiss cheeses are enjoyed around the world. 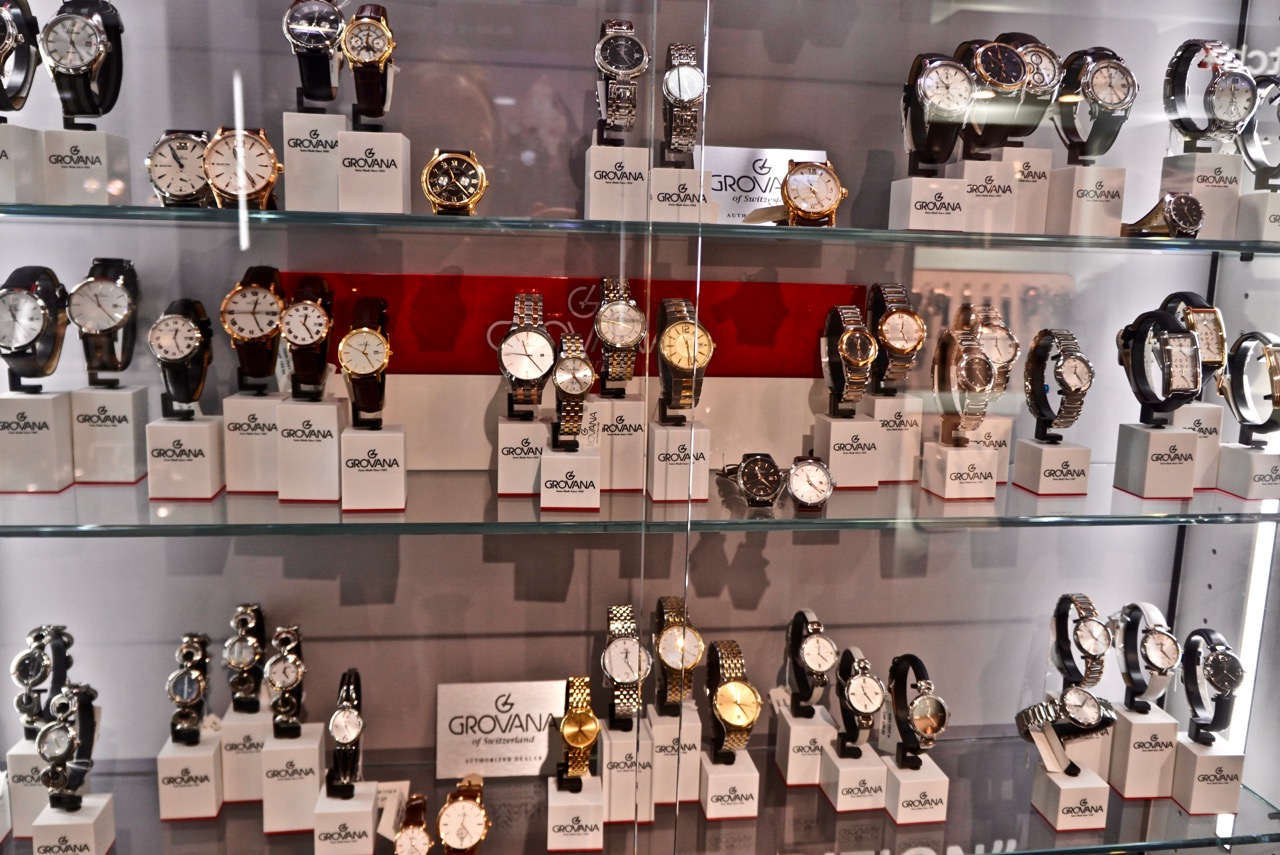 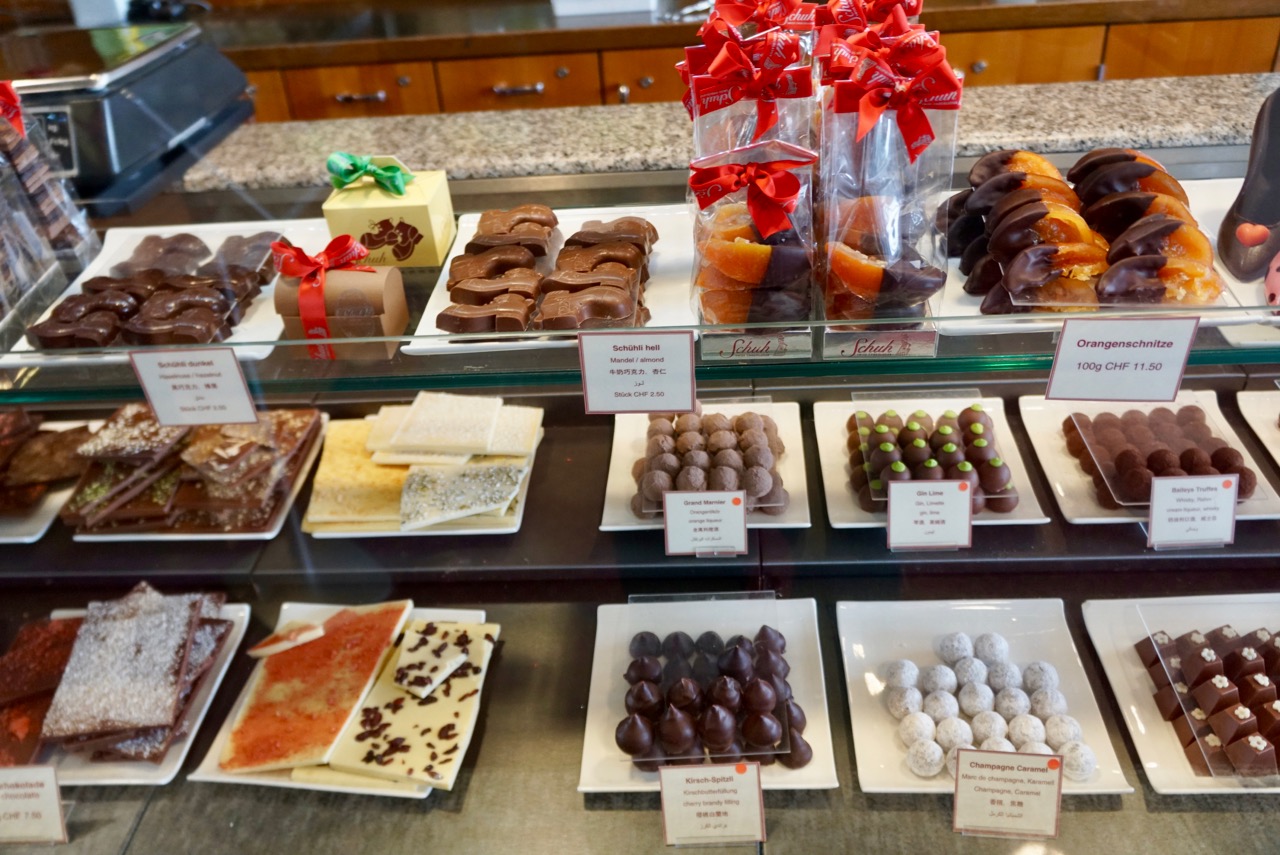 This visit by Susan and me to Switzerland was part of Switzerland’s other leading industry, tourism. There’s no question that Switzerland is home to some of the most beautiful mountain landscapes in the world. I was told that if Switzerland’s mountain landscapes were flattened out, the country would be eight times as large as it is. We had the pleasure of two days of mountain tours leaving from Zurich, during which we saw ski areas that are much larger than the ski areas in the US. The ski paths are so extensive that it’s possible to ski for many miles, starting at the high mountain tops and skiing to towns and villages miles away and far below the developed “ski areas” with their ski lifts and groomed trails. Also, due to its latitude, snowfall is much heavier at relatively lower elevations than in the states.

The Swiss transportation system is outstanding. We were told that the extensive bus system serves every single village in the country, no matter how small or isolated they might be. Switzerland developed the first all-electric train system in the world. There is the world’s longest rail tunnel under the Alps, linking Switzerland with Italy, that is thirty-five miles long! The Swiss derive 70% of their electricity from hydroelectric plants and the remaining 30% from six nuclear power plant

Traveling for several days through the countryside, I must describe Switzerland as “manicured.”  It is the cleanest, most tidy country I’ve ever visited, perhaps even more than Sweden and Germany, which are also extremely clean and well-organized.  Congratulations to the Swiss for their beautiful country.  However, one taxi driver in Zurich was obnoxious in his national pride, exclaiming in a bragging way about how his country is the best, the cleanest, the most efficient, the most beautiful, the most democratic country in the world.  But even he admitted one of Switzerland’s major disadvantages:  it’s very expensive, almost as much as Norway (the most expensive country I’ve visited).

Switzerland has four official languages, German, French, Italian, and a unique Swiss dialect. Sixty percent of the Swiss population speaks German. In its history, Switzerland was ruled by the Romans, the Austrians, and the Germans. We heard the story of William Tell, a hero of the eleventh century, who challenged Switzerland’s Austrian rulers at the time. William Tell was able to save himself from prison by successfully shooting an apple off his son’s head with a bow and arrow. He carried two arrows, such that in case his missed, he would use the second arrow to shoot the Austrian ruler who had imprisoned him in the first place.

The number of cultural events is impressive. Many of the world’s major artists who perform in New York, London, and Paris also perform in Zurich, Basel, or Geneva. There are many outstanding museums and galleries. We managed to visit two superb museums in Basel, the Natural History museum and the Music Museum. The Music Museum was of particular personal interest to Susan and me as musicians. It is housed in a building dating from the middle ages that had originally served as a hostel for farm workers and later was used as a prison. The former prisoners’ rooms have been converted to show tasteful displays of collections of different musical instrument families. Each small room contains a multi-lingual computer screen where one can hear recordings of performances demonstrating the various instruments being displayed in the rooms. The sound systems are excellent. The collection of instruments is priceless. Once again, congratulations to the Swiss for having created the best music museum that I’ve ever visited. 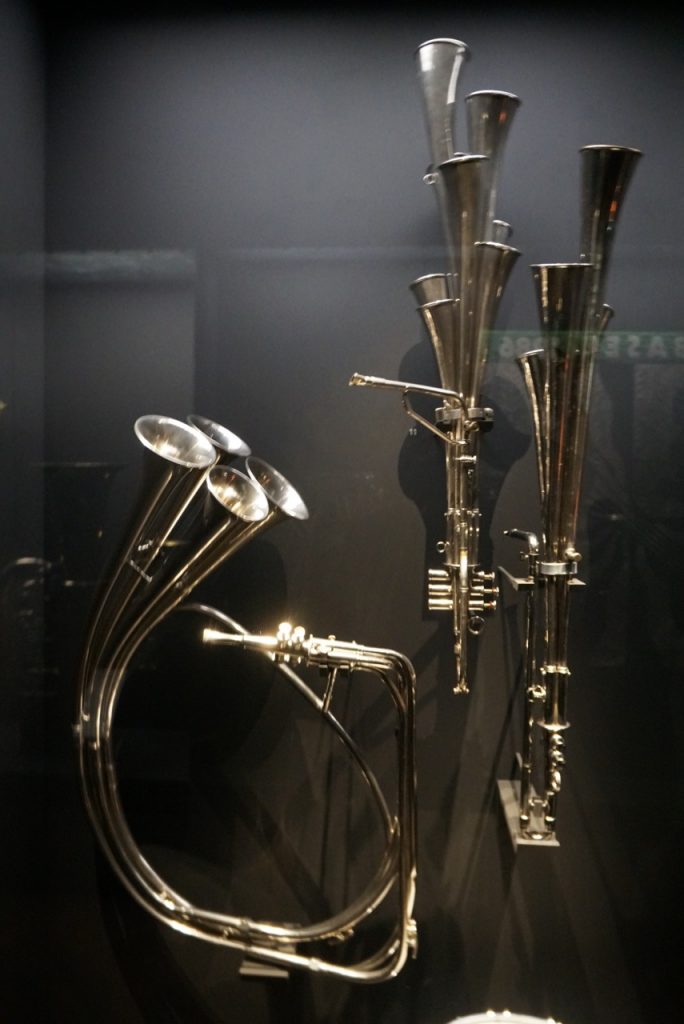 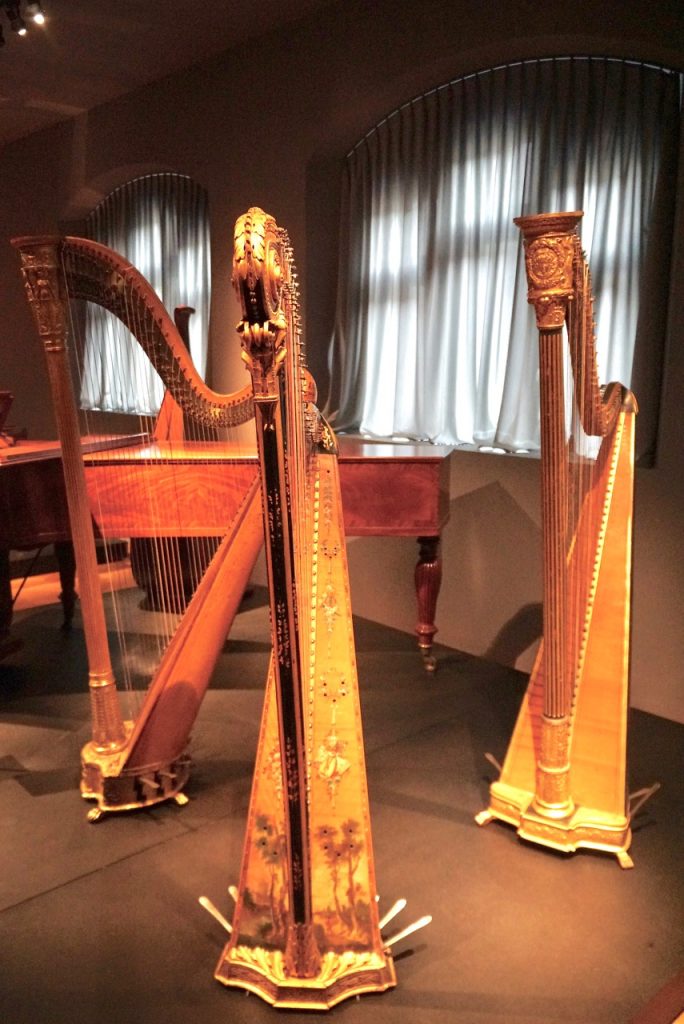 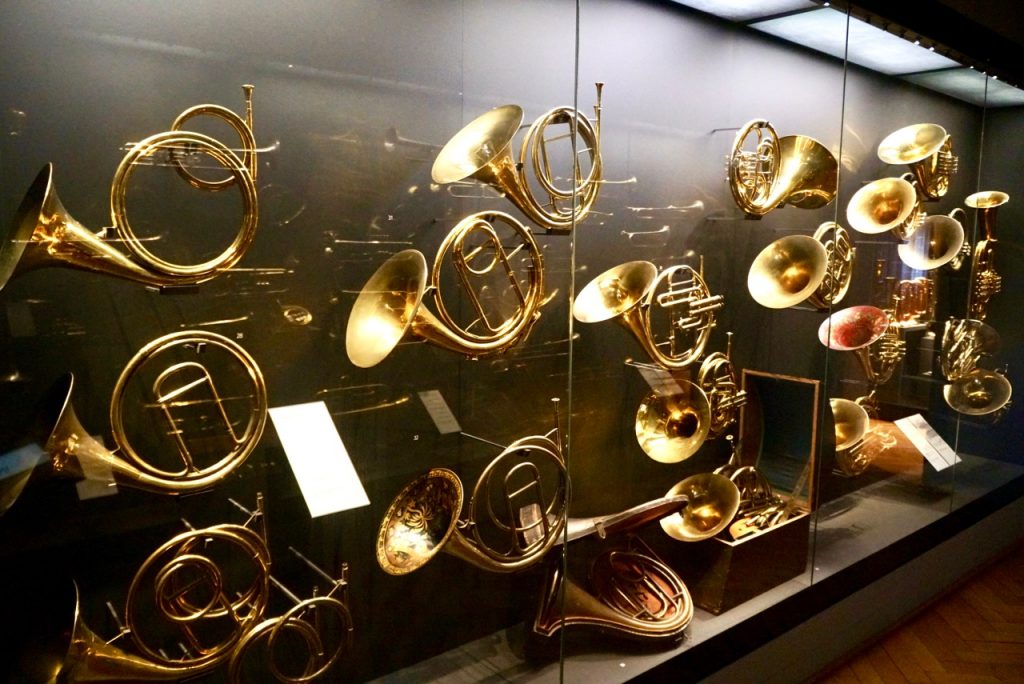 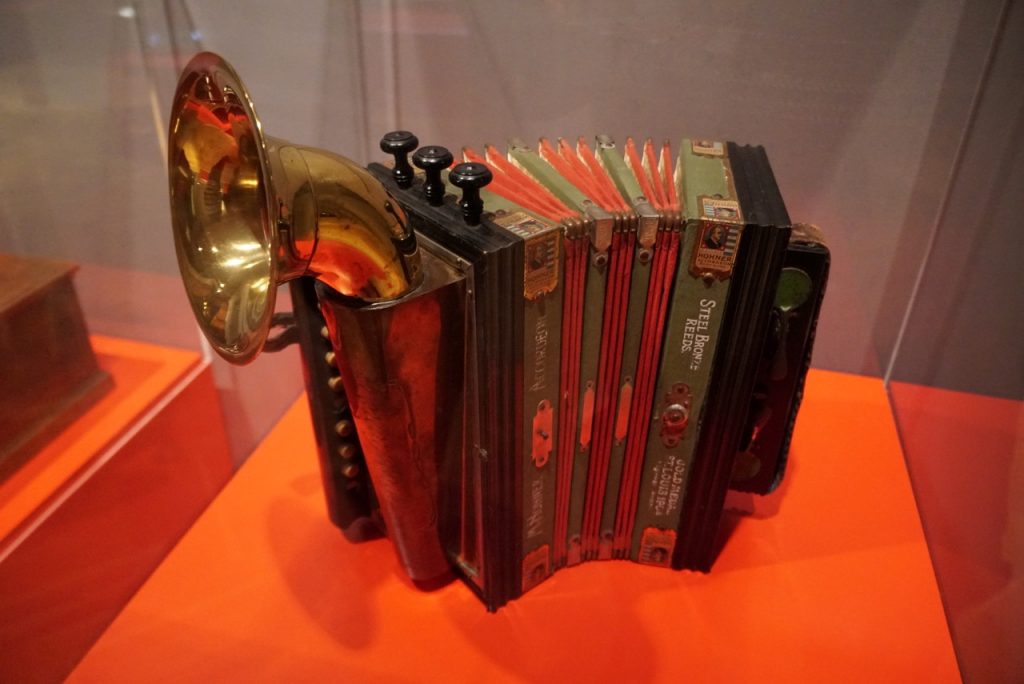 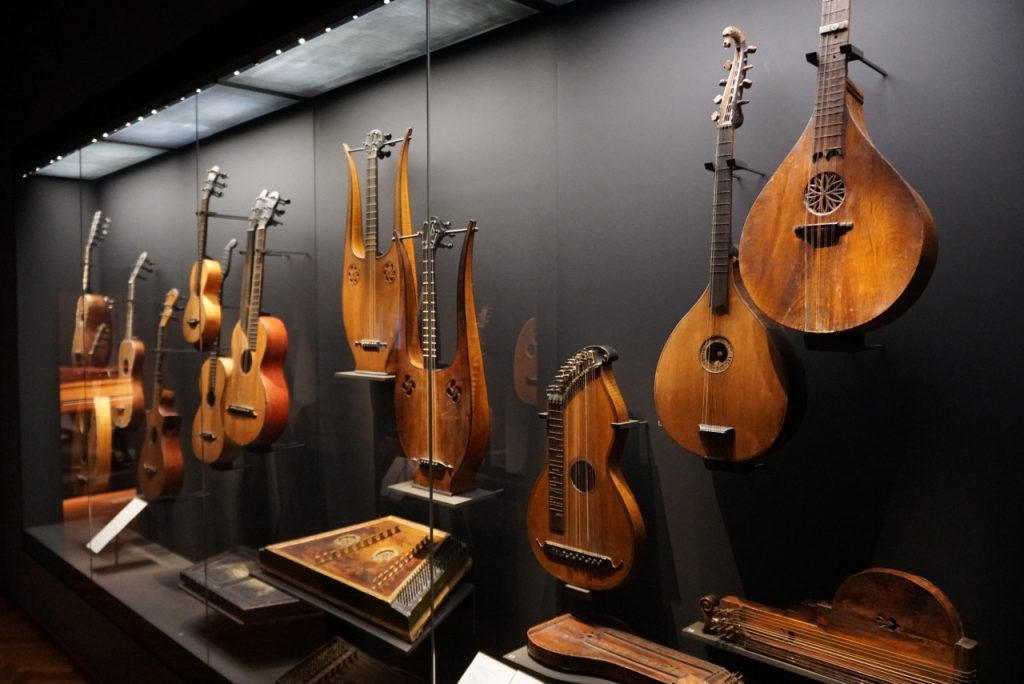 http://www.mazerandsmith.com
My Musical Vacation in India
Photos from the River Cruise through Germany and the Netherlands