During my extensive travels through the years, I’ve cultivated a private pleasure on long plane flights. That is, I catch up on my unread New York Times magazine sections, as well as any unread Book Review and Opinion sections. At home, we get the physical NY Times delivered every Saturday and Sunday. And I receive the online version every day to my email account. Of course, it’s widely recognized that the NY Times is one of the world’s best newspapers. It carries an incredible variety of news, opinion, culture, science, technology, and travel features. Reading the NY Times as I travel across the country or around the world puts me in the perfect frame of mind to step off the plane into a different society/culture/”movie” than the one I left behind. Thus, I don’t mind long plane flights much any more. The flight time

to and from Georgia was not long enough for me to catch up on my backlog.

My old hometown of Columbus

Columbus, Georgia, is the place I spent the first two decades of life, where I attended public school. But my real “ties to the land”, my “roots”, are actually to the forty-acre “country place” over the stateline in Alabama across the Chattahoochee River from Columbus. It’s somewhat bittersweet to visit the place, since the memories of my departed parents are everywhere. But there’s still a smell, a legacy, a longing to hold onto the past, that I feel every time I visit, which is only once or twice a year.

Back across the river in Columbus, I have two aunts, one 91 and the other 89 years old. The 91-year-old is fading…again, another bittersweet encounter to spend time with her. I have quite a few cousins in and around Columbus. We had a family gathering last week where we tried to catch up with each other. I had not seen one couple (who live a hundred miles away from Columbus) in over fifteen years. It’s really impossible to “catch up” with everything that’s happened to each of us in the intervening years. About the best we can do is to renew our personal connections and express our familial love for each other.

Very few of my relatives have a good understanding of my life 2500 hundred miles away in the West these past forty-odd years. I feel like I’ve gone through many personal changes over the years, but the people who’ve stayed in Columbus all these years seem pretty much unchanged, with the exception of those I’m closest to, who have lived in other places before returning to Georgia, such as my cousins who were the ones who encouraged me to study in Germany forty-five years ago, which changed the course of my life more than any other single life event.

One event I try to arrange every time I visit Columbus (besides seeing family) is to play a concert-gig with my longtime musical friends. The Loft on Broadway has jazz every Friday. Admission is free, so I can invite all my friends and family without reservations. That event is sort of a “friends reunion,” an opportunity to see as many friends as possible at one time. A year ago, a dentist friend with whom I had attended elementary and high school 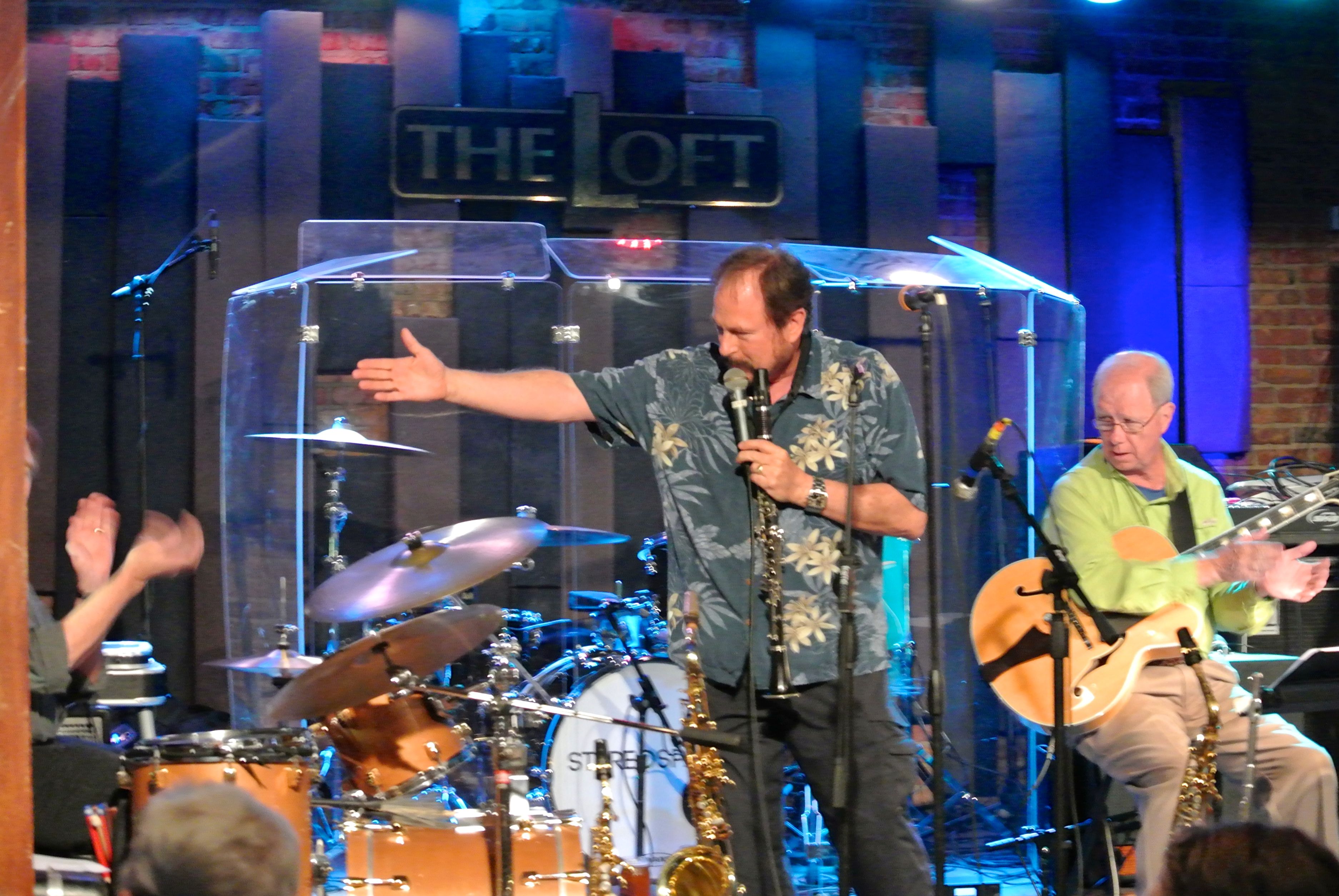 attended my concert. He died a couple of months ago…Bittersweet memories but especially sad because he was “only” my age.

The East Coast of Georgia

This trip to Georgia was special because I visited parts of the state I had never visited before, the historic city of Savannah and Cumberland Island, a barrier island now a nature preserve but formerly a winter retreat for the Thomas Carnegie family, the site of battles between Spanish and English colonizers, and home to a lost Native American tribe for centuries before that.

It’s ironic that though I’ve traveled extensively around the world, every single person I told of my travel plans had previously visited Savannah, except for me. This trip was with my longtime friend and travel companion, Bill. He has visited the east coast of Georgia many times over the decades, especially in his capacity as a boy scout leader. It was during a previous trip with Bill and other scouts over a decade ago, a week-long canoe trip down the Suwanee River, that I first let my beard grow, which I’ve maintained ever since.

Cumberland Island is only accessible by a ferry ride of approximately 45 minutes. Except for park rangers’ trucks, there are no cars on the island. It is 18 miles long, and its most notable feature is the burned-out skeleton of a huge mansion built by Pittsburgh steel fortune heir Thomas Carnegie, brother of the famous philanthropist Andrew Carnegie. This mansion was on the lavish scale of the Hearst Castle (of newspaper magnate Randolph Hearst of San Francisco) or the Biltmore Estates in Asheville, North Carolina. The Carnegie’s apparently only stayed in their Cumberland mansion for a few weeks in winter every year, preferring their other fantastic mansion on Martha’s Vineyard (island off the Massachusetts coast). The Carnegies’ wealth can only be compared with current billionaires Bill Gates, Warren Buffet, or the Koch brothers.

“Poor” Thomas Carnegie didn’t get to enjoy Cumberland Island very much because he died at age forty-three. But his wife continued to live there for decades after his death, supported by many servant-staff, while every food item, building material, or other supply had to be brought to the island by boat. Sometime after her death, the neglected mansion was destroyed by fire. One legacy of the Carnegie’s is that wild horses left over from their time continue to freely roam the island.

There is a small museum that tells the history of the island. Native Americans had lived in the area for at least two thousand years before the first Spanish colonizers arrived. The Spanish tried but failed to convert the “savages” to Christianity. Thereafter, they were exterminated. One Spanish Catholic priest tried to document this obscure language, but his scholarly efforts were never completed, and so that language and culture is lost forever

The British and Spanish fought each other during the sixteen and seventeen hundreds for control of the “new world”, with the British occupying Georgia, while the Spanish controlled Florida with their capital in St. Augustine, Florida, the oldest Spanish settlement in the North American new world. Cumberland Island was then settled by a rich British community comprised of 69 whites and 200 African slaves.   Slaves lived and worked on Cumberland Island until General Sherman’s famous destructive “march through Georgia” prior to the end of the American Civil War, 1861-65, still referred to by many Southerners as the “War for Southern Independence.”

It occurred to me, as I visited the Cumberland Island historic museum, that the European colonizers of those years were similar to the current ISIS, the violent Islamic State revolutionaries in Syria and Iraq. Any native who didn’t convert to Christianity would be killed or driven away. Slaves were owned for generations by the rich white landowners. The Spanish famously plundered and exterminated the Mayan and Aztec civilizations of Central and South America. But the English, followed by the Americans, were no kinder to the North American native tribes, all the while using slave laborers kidnaped into servitude from Africa.

I am very happy to finally have visited Savannah, to learn more about Georgia’s history. American history is relatively short compared with Europe and Asia, and so it’s nice to encounter anything more than a century old. Unlike Atlanta, Savannah was not burned and plundered by General Sherman’s soldiers during the Civil War. Thus, Savannah has over four hundred anti-bellum (pre-Civil War) buildings, with a few dating as far back as the 1700’s. Built on a river with easy access to the Atlantic Ocean, Savannah’s original streets were laid out in a grid with numerous squares, which mostly contain statues of city founders or military heroes. Many old buildings have ornate metal elements reminiscent of New Orleans. 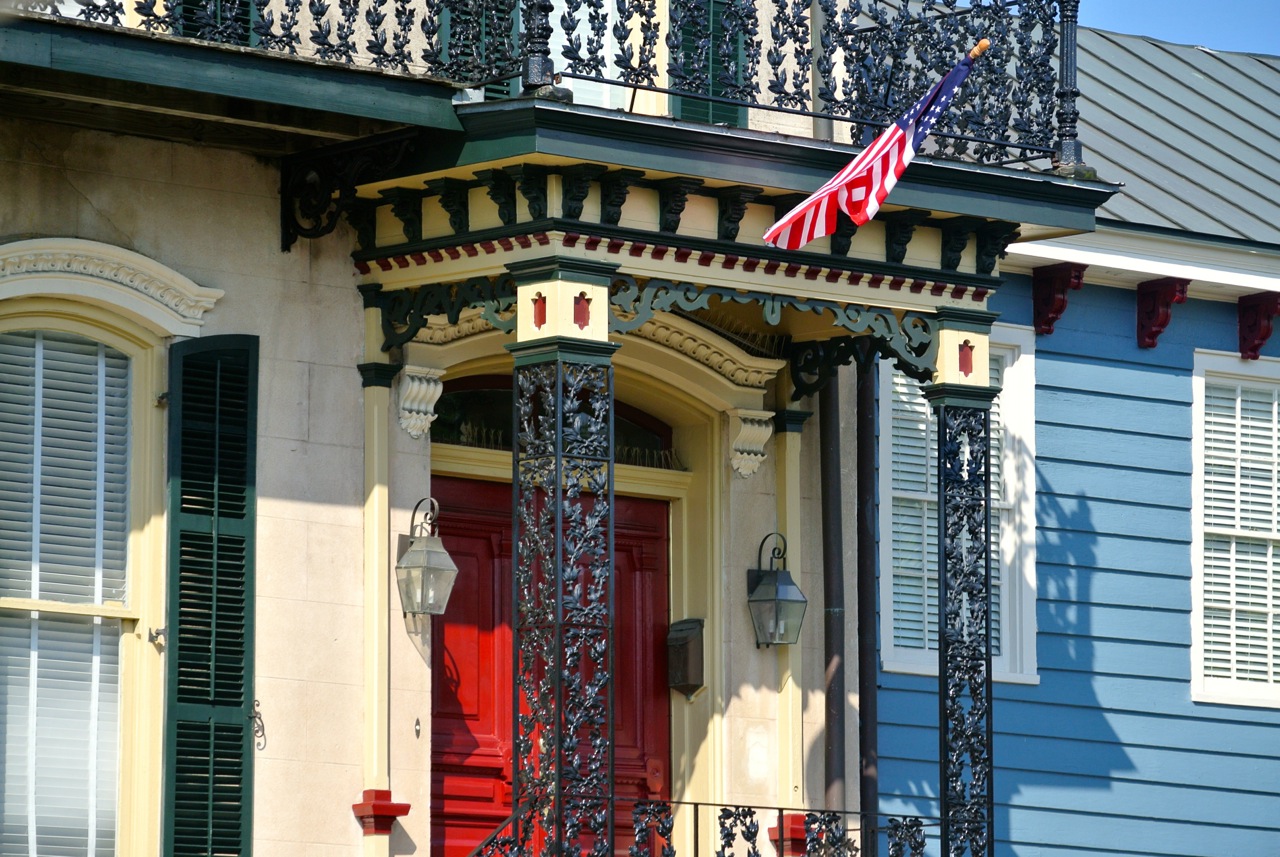 Bill and I took a tourist bus tour around the city center which offered a detailed history of the city. In its heyday, Savannah was the second largest port in the world for cotton exports.  On the tour, the site of the weekly slave market was pointed out.  It’s hard to imagine human beings being bought and sold every week.  After 1776 and independence from Britain, the mayor of Savannah hosted President George Washington on his only official visit to the new state of Georgia. That mayor personally owned over six hundred slaves. Savannah is still a major seaport for the Southeastern United States. Savannah was the home of famous songwriter Johnny Mercer, as well as famous Reno judge and boxing referee Mills Lane. 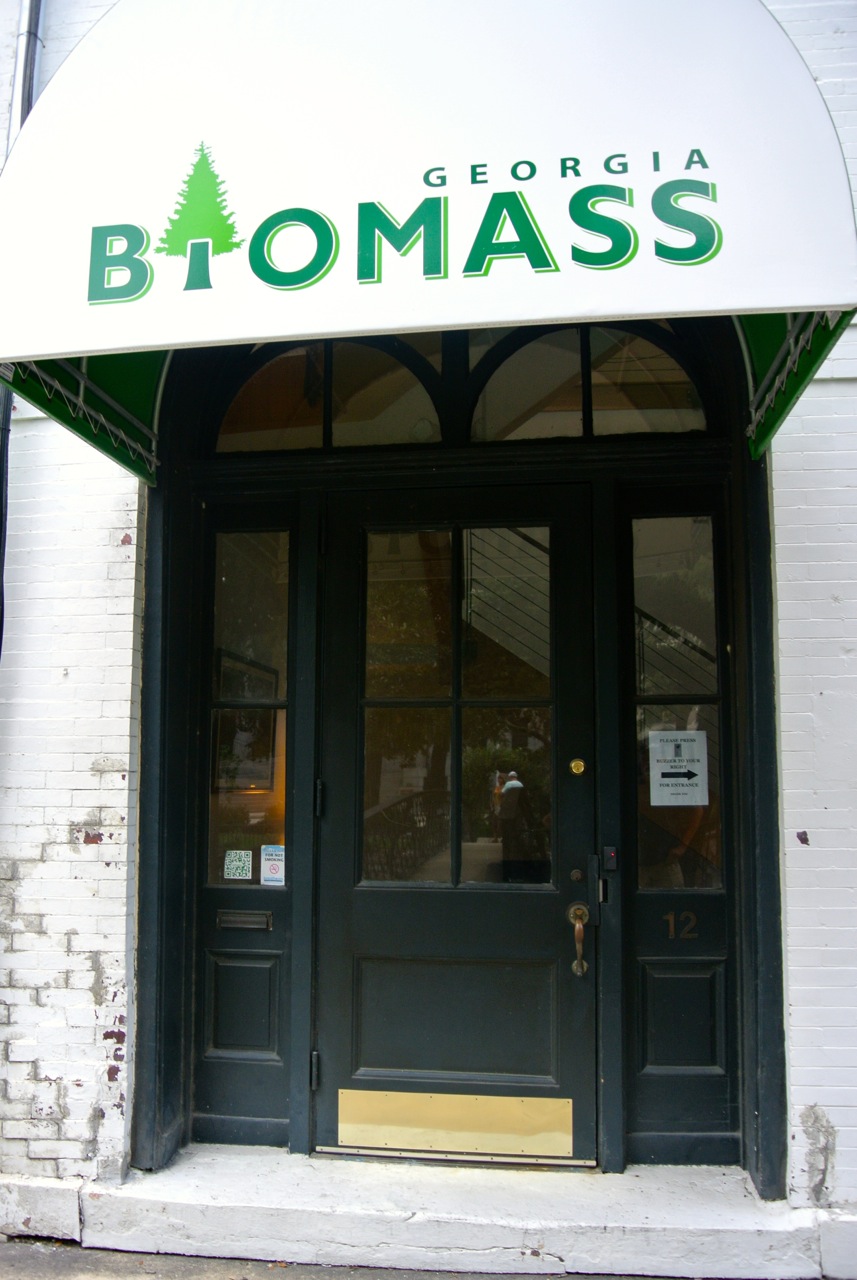 As we drove to Savannah, I had been telling Bill about my Norwegian-German-alternative-energy-pioneer-entrepreneur, friend, Per. (I’ve blogged about him often.) As we arrived downtown in Savannah and started to walk around, one of the first things we encountered was the office of Georgia Biomass. Based on my curiosity borne of my familiarity with Per’s biomass conversion factory, I rang the doorbell to find out more about Georgia Biomass. Amazingly, I learned that it is a German-owned company with almost one hundred employees, that takes Georgia’s pine trees and converts them into fuel pellets exclusively for the European market. They fill a cargo ship with the contents of the equivalent of thirty railcars about every three weeks. And they are already contracted through 2019 for their total output! Georgia Biomass hopes to build an additional factory somewhere in the South, a region which is so rich in pine trees.

I was amazed to learn that Georgia’s biomass pellets are used in Germany’s coal-fired power plants to help them meet Germany’s stricter air pollution standards. When will America wake up to the benefits of alternative energy sources such as biomass? Why don’t our domestic dirty coal-fired plants use biomass wood pellets for fuel, instead of exporting it to Europe? This is the same American short-sightedness that led an Israeli company (Ormat Technologies) to build a geothermal power plant in Reno, the site of which in my first years in Nevada had been an unexploited steam vent spouting its heat into the air from a hill next to the freeway on the southern end of Reno.

There is a major distinction between Georgia Biomass and my friend Per’s biomass to energy (company name BtE) process. Georgia Biomass pulverizes the pine trees, chemically treats the powder, and directly creates pellets. Per’s patented process uses grass clippings as fuel, pulverizing, washing, and fermenting it, to produce fuel pellets as well as methane gas as a byproduct of the fermentation stage, which is collected and used for heating. So while Georgia Biomass cuts the forests of the verdant Southern states for its fuel source, Per’s factory uses biomass waste products from lawns, gardens, parks, and roadsides that otherwise would cost money for disposal. There is the strong possibility that within a year or two (as soon as Per’s patents extend worldwide) that the first American biomass plant using Per’s technology will be built in Detroit. Watch this blog-space for future developments.

Leave a Reply to LaVerne Nielsen