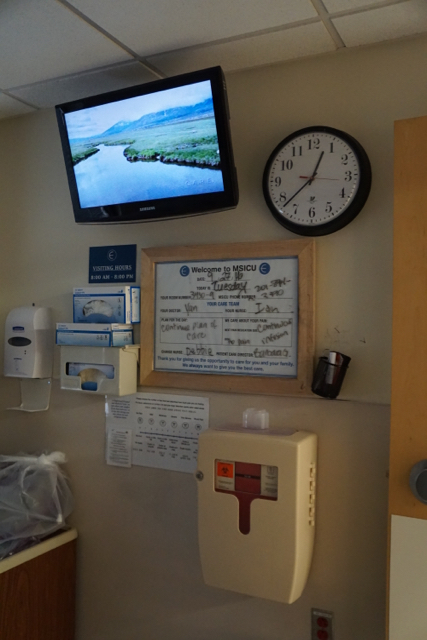 Hospitals are noisy places. Think of beepers, buzzers, alarms, rolling carts, slamming doors, cries of pain and sorrow, miscellaneous conversations. The government has created a post-hospitalization questionnaire to evaluate the patients’ perception of how quiet their hospital was at night. Due to a below average scores on the nationwide evaluation, Englewood Hospital in New Jersey brought Susan and me to NJ for a three day residency, in order to work with staff on the issue.

It was a pleasure to work in a hospital that already has our CARE Channel. Nonetheless, many of our workshop attendees were unaware of it. We were able to concentrate on empowering the nursing staff to use the channel as a tool to supplement their daily care plans. 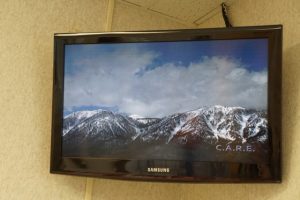 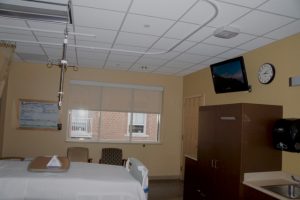 The Director of Facilities Management had remembered our work with a different New Jersey hospital over twenty years ago!  The hospital has previously engaged other consultants, but the sound environment problems have persisted.  Susan’s presentations and leading of the staff conversations were successful enough for the Director to suggest that we might be brought in for such consultancy engagements several times in the coming year.  We were gratified by the reception to our work. 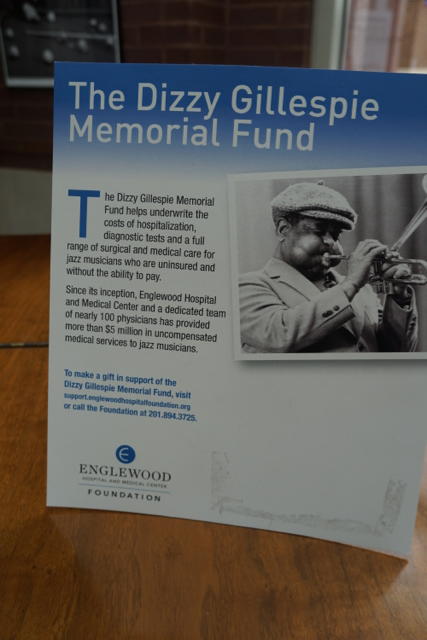 The Englewood Hospital is unique in regards to musicians.  Trumpeter Dizzy Gillespie spent his final days in this facility. He offered the use of his name in the formation of a foundation to benefit local musicians who otherwise don’t have health insurance. Gillespie’s surgeon happens to be a jazz guitarist. The surgeon led the formation of the foundation, the Jazz Foundation of America.

There is a corner of the lobby devoted to the foundation, with a piano for regular performances. While we were there, two excellent guitarists performed, playing world-class-level jazz for two hours in the middle of the day. I sat in on flute with a pianist on our third day there. Otherwise, I played during the workshops as part of a meditative exercise related to the perception of the passage of time in silence versus with music.

Susan and I took advantage of being so close to New York City to attend several concerts. We determined that it was much easier to just stay in the hotel in New Jersey where we had spent the week as opposed to transferring into a hospital in Manhattan. That required us to take the bus from Englewood to the Port Authority bus terminal. The weather was sometimes rainy, and luckily Susan had had the foresight to bring to small umbrellas for us to use.

The first concert we attended was a piano-saxophone duo of Brad Mehldau and Joshua Redman. I’ve been a longtime fan of both these musicians separately. So I looked forward to hearing them together. When we finally made it to Lincoln Center Jazz for the concert, the performance was beyond my positive expectations. I’ve attended hundreds if not thousands of concerts in my life, so when I say that this was one of the best concerts of my life, I don’t say this lightly.

During the bus trip into the city, we met a fellow passenger who informed us that he played

trombone for the Cirque Du Soleil, and he suggested that we attend the afternoon matinee show. The show, call Paramour, played in the Lyric Theater, an older ornate structure well suited to the show, which was basically a romantic story accompanied by acrobatics. We had attended other Cirque Du Soleil shows in Las Vegas and Reno. It fulfills the high standards of its other productions.

Our final concert was the Ron Carter Big Band at the historic Birdland club (named for Charlie “Bird” Parker). Ron Carter is one of the most recorded bass players in history, starting with Miles Davis and continuing with practically any musician of note since Miles. He doesn’t surprise you with his virtuosity, rather, he is a rock-steady anchor inspiring his collection of outstanding band members.

There may be more expensive restaurants somewhere, but…

Coming out of Lincoln Center after the Mehldau-Redman concert, we were looking for a restaurant. One floor below the concert hall was an upscale Japanese restaurant, called Masa. We were informed that the concept of the restaurant was a chef-chosen 27-course meal for the price of $595/person, not including alcohol or taxes.  We were shocked and amazed. We took the elevator to the basement (the building is Columbus Circle, across from the Trump Hotel next to Central Park). There we ate a meal from the Whole Foods buffet for the bargain price of $12 each. Later, our friend who lives in the city told us that Masa is reputedly New York City’s most expensive restaurant.