This two-week tour of Turkey was managed by Go Ahead Vacations, a Boston-based tour company.  Susan and I had traveled using their services once before, to Italy in 2006.  We decided that for a country like Turkey, with which we were completely unfamiliar, that going with an organized tour was the best way to see the most sights in a short time without having to worry about managing any of the details ourselves.

It takes time to write thoughtful blogs in the midst of such a tour.  The concentrated sequence of places and events has overwhelmed my ability to keep up with blogging in the detail to which I would prefer.  Thus, here are some relatively brief descriptions of sights seen on the tour.

The Tomb of Rumi

Rumi was a 14th century poet born in Iran.  His liberal views of religions forced him to forsake Iran to spend his final years in Turkey, though he continued to write his poetry in Farsi.  Rumi approached the Muslim religion with almost a Buddhist-like perspective…searching for beauty in all things, finding ecstasy though music, poetry, and whirling meditation.  Here’s my best rendition of a Rumi quote:  “Come all of you into my special temple.  It matters not whether you are an infidel or a sinner.  What matters is that my temple is a place of joy and hope, not guilt and sorrow.” 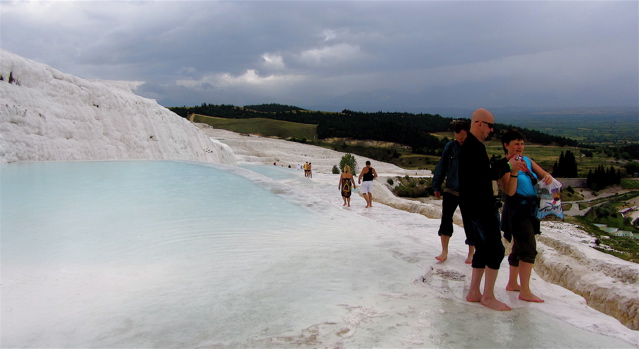 Panukalle is a ancient spa town home to large hot spring of sulphur-dioxide laden water that over the centuries has left huge layers of white deposits which look like frozen waterfalls.  Despite the potential contamination of the pools, the public is allowed to wade barefoot through the warm water as it flows from one pool to the next.  Unfortunately, it was raining on the day we were there, so my photos don’t do the location justice.  Nonetheless, we were able to enjoy soaking in the hot pools at our hotel fed by the hot spring water.

Go Ahead Vacations offers special add-on excursions such as this one.  Our tour group was one of probably eight or ten other groups, meaning that the show package is very successful and well attended.  Booze, in the form of local wines and an anis-flavored liquor, was included in the admission price.  There were live musicians playing classical Turkish music for saz (lute) and drum, which was very enjoyable.  When the show with the dancers started, the recorded soundtrack was loud and over-produced, more like a Riverdance show than a folk dance show.  There was one outstanding belly dancer, which is probably the most expected type of dance at a show like this.  By the time the dancers invited the audience members to come dance with them to a loud Macarena-reggae type beat, I was ready to leave.

balloon ride over the striking landscape of Cappadocia.  Pictures of the balloons over the unique spires of Cappadocia are standard for Turkish tourist advertisements.  The basket held about twenty-five people, which disappointed me initially.  However, the pilot was very skilled, the weather was perfect, the winds were gentle, and we floated pleasantly up and down through the fantasy landscape which I will describe shortly. Thus, it was a wonderful new experience.  It’s ironic that I should experience my first balloon ride of my life in Turkey, when the Reno Balloon Races take place every year very close to our house.

Some of you may have driven through the small town of Mexican Hat, Utah.  It is home to a large rock formation that resembles a sombrero atop a stone column.  The generating mechanism is exactly the same in Cappadocia.  Thousands of years ago the valley was filled with volcanic ash from near-by volcanic eruptions.  At some point, large boulders were cast around the valley from the volcanoes. 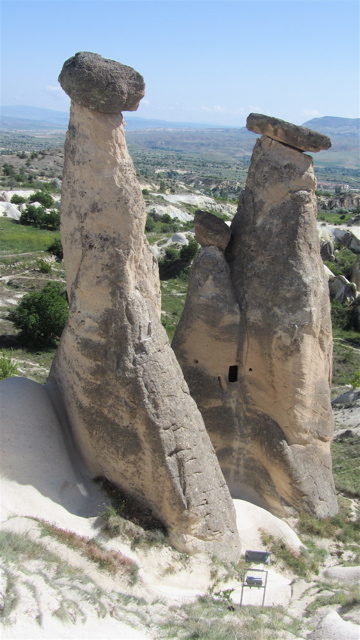 The volcanoes then entered a dormant or extinct period.  The packed volcanic ash in the valley was a softer type of rock than the harder rocks above.  Following thousands of years of wind and water erosion, the valley was eroded, dissolved, and washed away, except for the spires on which the harder top stones had packed the ash beneath them enough to resist the erosive forces.  From the second through the tenth centuries, Greek Christian communities dug cave homes in the soft rocks of the spires.  These isolated communities survived through the fact that they were very poor, mostly monasteries of famously ascetic monks and nuns.  When the Muslims displaced the Greek Christians, their stone houses were abandoned for centuries and have only been revived in the last few decades through tourist development.

The history of Turkey is mostly evident in the Greek and Roman artifacts from their centuries as the rulers of what is modern Turkey.  The Antalya Museum contains a great collection of statues, sarcophagi, coins, jewelry, etc.  It is unfortunate that the Moslem prohibition of “idols” extends to a disdain for any artistic representation of any human image, whether statue, mosaic, or painting.  Thus, during certain centuries, all Christian artifacts were either defaced or destroyed.  For example, in the cave churches of

Cappadocia, the eyes and faces of most all the ancient statues  and paintings had been defaced.  This is the same misguided impulse that led the Taliban of Afghanistan to destroy the famous Buddha statues of Bamiyan, as well as much of Afghanistan’s pre-Islamic heritage found in its museums.  Thus, it makes the Antalya museum a special repository for the Greek statues that survived intact through these many centuries.

People of the Book

This is a well-known Islamic phrase that I had misunderstood.  Previously, I had assumed that this was the Islamic reference to Jews and Christians as religions that shared an allegiance to the Talmud or Bible, similar to the Koran.  But the actual meaning refers to religions besides Islam that were mentioned by Mohammed in the Koran.  Mohammed referred to Jews and Christians as serving the same god, such that Moses, Jesus, and other famous figures in Judaism and Christianity

are regarded as prophets from god and thus requiring respect.  Thus, any practicing Moslem who does not respect Jews and Christians, the people of the book, is violating the Koran.

I really haven’t seen any poor Turks, no beggars, no street people, no shacks, no malnourished children.  (So different from India…) Tour guide Mehmet explained that Istanbul grew in the last fifty years from a city of three million to its current fifteen million largely through the influx of poor village people moving in search of jobs.  Millions of them built unauthorized housing on government land.  For years, each government put off dealing with the squatters, because they didn’t want to lose their votes in the next election.  Finally, the government built large apartment buildings which were given free to the squatters, in return for them abandoning their houses on government/public land, after which the government was able to reclaim and develop much urban land in Istanbul.  India should consider this approach.

All Turks receive practically free healthcare.  A person might end up paying at most 10-15% of the costs of treatment.  A person with no job or income simply receives a voucher for free care.  Taxes are paid exclusively by the employers on all their workers.  Only entrepreneurs or independent contractors pay personal income tax, ranging from 28-34%.  Some workers get paid “under the table” such that the employer doesn’t have to pay taxes on them.  This form of tax evasion is just like what happens in the states.  Turkey is now the 17th largest economy in the world, and is expected to reach the top ten within a couple of decades.

It was ironic that on the same day Mehmet told us about the Turkish healthcare/tax/social system, that we had a conversation with a fellow traveler who will soon be retiring after working for 43 years at a public health clinic in San Francisco.  She spoke of the indigent, homeless, psychotic, and drug-addicted patients that she sees every day.  She said that alcohol abuse causes more problems than all other drugs combined.  The saddest cases are the untreated mentally ill persons who have no other access to treatment.  This sad state of affairs was begun when Ronald Reagan was governor of California, and closed the public mental health clinics, putting the patients onto the streets and into the criminal justice system.  I think that act of Reagan’s marks the symbolic turning point of when the American healthcare system lost its grounding in the value of providing care, and instead led to the current profit-based system to which 50 million Americans have no easy access.  It is shameful, and likely to get worse before it gets better.

On our last day, the group took a cruise on the Bosporus, that narrow channel of water

separating Europe and Asia, which divides the city of Istanbul connecting the Mediterranean and Black Seas.  The cruise gave a deeper understanding of Istanbul’s rich history and cultural variety.  There are several palaces along the waterfront built by the Ottoman Sultans as summer homes.  One of them has been converted into an upscale hotel.  A large suite with thirty-foot ceilings and antique furnishings can be had for $9000/night, breakfast not included.

The Ottoman Empire built fortresses to protect the Bosporus from a potential Russian invasion from the north.  I also learned that in World War One, 400,000(!) soldiers died when the Western allies led by Winston Churchill, commanding mostly Australian and New Zealand soldiers attempted to invade Istanbul via the Gallipoli peninsula.  The Turkish forces were led by Kamal Ataturk, who went on to rule Turkey after the fall of the Ottomans, when the Sultan and his family were forced to emigrate from Turkey.

There is a tremendous feeling of living history in Istanbul.  Today, we visited the Spice Market, which dates from the late 1500’s.  The “new mosque” next to the market dates from the same time.  It is amazing to walk on the streets and visit the buildings that have

functioned through so many dramatic periods in history.  It’s a humbling experience to feel the current moment as just a blink of the eye in the long view of history.