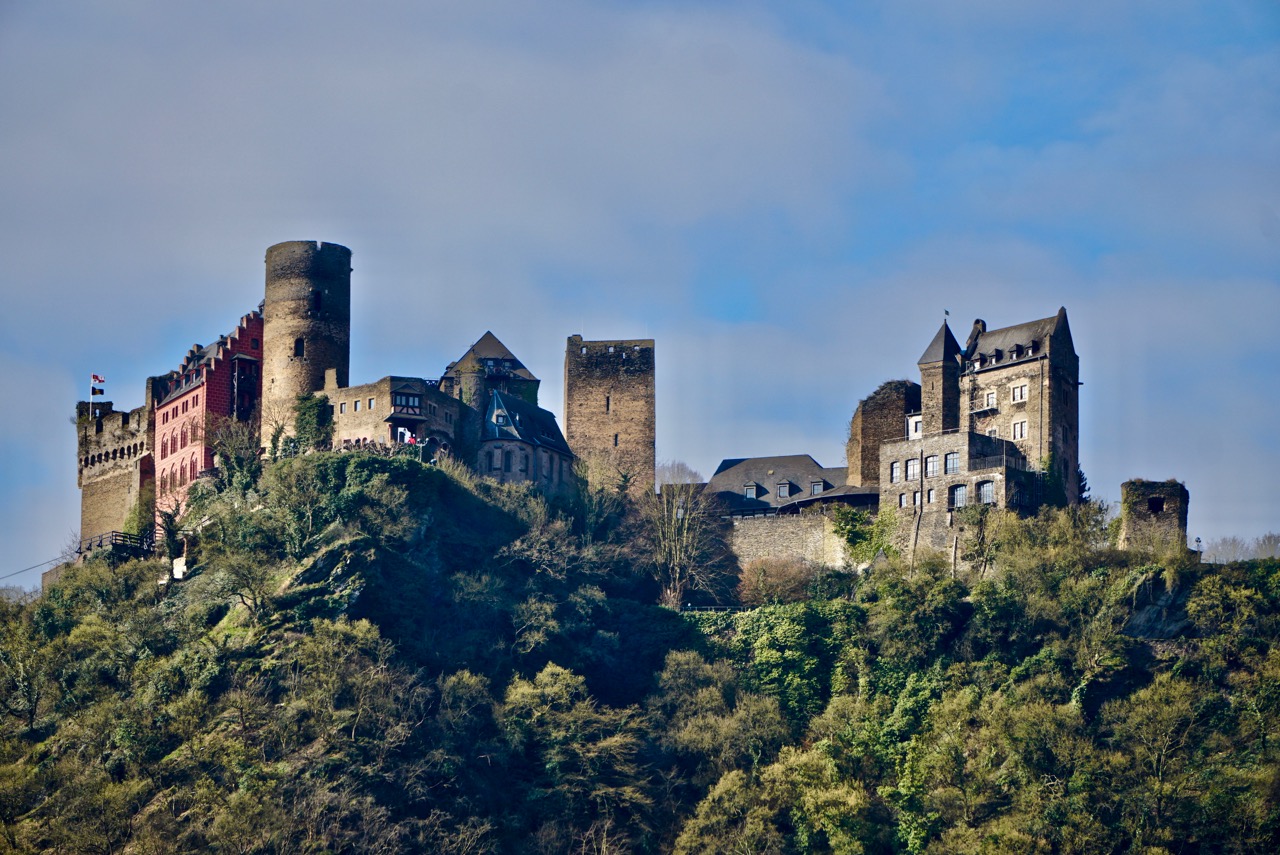 I’m very lucky to be able to travel internationally as much as I do.  It’s a privilege once reserved exclusively to kings, military leaders, international merchants, and those individuals rich enough to afford to travel.  These days, travel has gotten cheaper in some ways (e.g. airfare, internet booking and phones) though more expensive in others (food, lodging).  For me personally, traveling is extremely stimulating.  It offers a non-stop stream of new people and experiences.  Having traveled to certain countries numerous times (Germany, Sweden, India), I’m pleased to be able to drop into the lives of old friends, to be totally immersed in the local culture, as opposed to being a tourist forever in transit and only able to delve superficially into the local cultures.

This blog is about a purely tourist trip, on the one hand offering only the quick superficial view of the cities visited, yet better than nothing, and in many cases paving the way for future return visits.  This tourist trips are different from my more single-focused recurring musical tours to Sweden and India.

Let me begin this blog with an unsolicited endorsement of Viking River Cruises.  This company does a great job in creating a smooth low stress environment for passengers on its boats.  The river cruises are a fantastic way to see Europe, because every day the boat docks in the center of a new city.  The cruise line provides land tours, either walking or by bus, with local guides.  I’m writing this essay at the end of an eight-day journey down the Rhine River from Basel, Switzerland, through Germany to Amsterdam, Holland.  Though I’ve lived in and visited Germany enough times over the years to become reasonably fluent in the language, this was my first visit to this south-west side of Germany.

This trip reminded me that Europeans are confronted with their long and turbulent history every day of their lives.  There are castles, fortresses, artwork, windmills, cathedrals, blended languages, multi-national populations, and many other constant reminders of the great cultural achievements of the various nations, as well as their numerous wars, conquests, and counter-conquests.  A survey of comparative European history confirms that the recent decades under the umbrella of the European Union (EU) have been the longest period of sustained peace in European history!

Two exceptional nations in the sad history of the many European wars are Switzerland and Sweden, which have experienced centuries of peace, based on their traditions of neutrality.  However, their neutrality has sometimes resulted in moral condemnation for their tacit support for some of the worst tyrants in history.  Most notably, both “neutral” countries have been accused of collaboration and appeasement of the Nazis in World War II.  Switzerland did not offer refuge to Jews.  Sweden allowed the Nazi military to use its railways to set up the invasion of Norway.  Nonetheless, because Switzerland and Sweden were not bombed during the last world war, their industries were fully intact at the end of the war, which resulted in their sustained economic strength and some of the highest current living standards in the world.

The Rhine River marks the boundary between Germany and France for a large portion of the cruise.  Departing Basel, Switzerland, our first stop was in Breisach, Germany, an ancient city that was one of the original bases for the invading Roman Empire two thousand years ago.  The next stop was the city of Strasbourg, currently part of France, though at times in its history it was part of Germany.

The Black Forest of Germany is famous historically and as a protected nature area.  When the Roman Empire invaded this part of Europe, they followed the same route as our river cruise down the Rhine River from Switzerland.  They established towns and military fortresses along their river invasion route.  The Romans avoided the Black Forest, because it was home to the wild bandits and marauders that opposed the Roman invaders.

It was the farmers in the Black Forest region who first invented the Cuckoo Clock.  The ornate clocks became a cooperative project in which different families would hand-carve the different parts to be assembled into the distinctive clocks.  Perhaps equally famous is Black Forest Cake, a layered cake with cherries and whipped cream.

Strasbourg is currently a French city.  But during other centuries, it was a German city.  Thus, the city is bi-cultural and tri-lingual (at least!).  Strasbourg is home to several EU and UN offices, which have created huge modern edifices.  Much of the Middle Age fortifications survive, from the time when Strasbourg was home to forces that controlled the traffic and trade on the Rhine.

Mosel wine (sourced initially from the Mosel River region of Germany) was the house white wine on the boat.  One of the excursions offered by Viking was a visit to a small family winery on the banks of the Mosel.  We learned about the history of the region, the challenges of growing wine in this particular region.  The French concept of terroir was invoked.  Terroir refers to the idea that the soil characteristics of a region impart a unique taste to the wines.

Cologne (in German Köln) is an important German city, and a pleasure for me to visit for the first time.  Our walking tour guide explained that Cologne had been an important Roman outpost on the Rhine River.  On the other side were the lawless German tribes.  Cologne’s famous cathedral dominates the city’s skyline.  We learned that much of the money for the cathedral had come from Berlin, for whom the Germanic cathedral would send a message to the French.  During the reign of Louiz the 14th  of France, its armies had invaded the Rhine Valley, destroying many of the castles that were the homes of local German territorial rulers.  The photos show a range of Rhine river valley castles, some in ruins and some renovated and in use as residences or hotels. 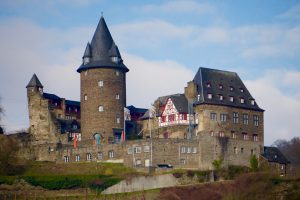 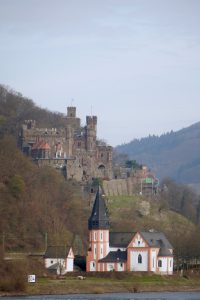 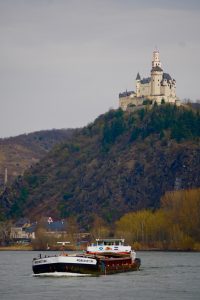 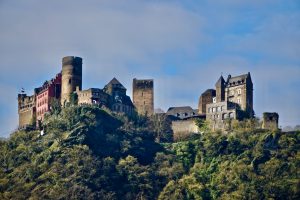 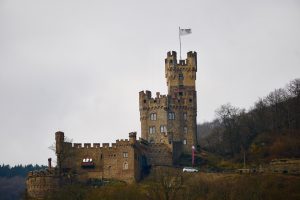 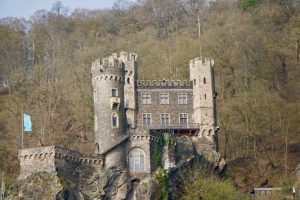 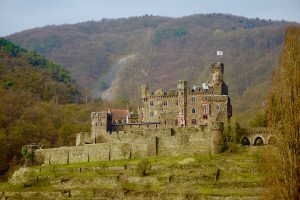 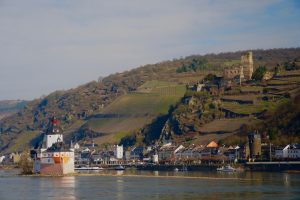 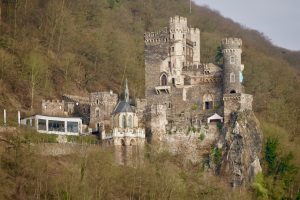 As the Rhine River leaves France and flows east of Belgium, the landscape flattens out into the Dutch plane.  In the boat, one notices that names are now mostly in Dutch, though there was no demarcated border on the river.  Viking arranged an excursion to a cheese farm/factory as well as to a World Heritage Site called Kinderdijk, which features a line of fourteen windmills dating from the mid eighteenth century.  All are maintained in working order.  The demonstration windmill on our tourist visit has been managed by members of the same family for eleven generations!  The “Miller families”…

The mills at Kinderdijk were all built to pump water from the low-lying inland territory to a river which flows into the North Sea.  It was amazing to see miles of fields lying below sea level and the water level of the river receiving the water pumped by the windmills.  I had always thought of windmills as being used to grind wheat into flour.  But there are also windmills that cut wood/lumber.

During the colonial period, the Dutch ruled the world’s oceans.  At home, the Dutch are the world’s masters of water management.  Thirty percent of the Netherlands is below sea level.  Shiphol Airport, the home of KLM Airlines and transit point for much of Europe is five meters/seventeen feet below sea level!  The Dutch defended themselves for centuries against invading armies by being able to flood large tracks of land as a physical barrier to the would-be invaders.  Nazi Germany dropped paratroop soldiers into Holland, flying over and bypassing the flooded fields.  The Dutch army was quickly overwhelmed.

Amsterdam is truly a tourist-friendly city, that is, if the hoards of tourists don’t overwhelm the environment.  (I was reminded of the crowds in India, but realistically, would take twice as many tourists to match India’s population density.)  There are many world class museums, but alas, we were only staying in Amsterdam for two full days following the end of the Viking River Cruise.  Over twenty years ago, Susan and I had viewed the paintings of Rembrandt and the Dutch masters whose works are featured in the Rijksmuseum.  We remembered how strong an impression these paintings had made.  On this follow-up visit, the effect was just as strong.  One could easily spend hours just examining each masterwork, such as Rembrandt’s Night Watch.  The Rijksmuseum was built around the huge paintings by the “Dutch Masters” from the seventeenth century.  The artistic skill with which the individual faces are painted is eerie.  We know that these individuals have been dead for centuries.  But in these paintings, they live on!

Amsterdam has for centuries been one of the most open, multi-cultural, free cities in the world. Founded in 1602, for the next two hundred years, the Dutch East Indian Company was the largest commercial company in the world.  Ships carrying goods from around the world sailed into Amsterdam’s harbor.  Their freight was off-loaded into smaller boats which could navigate Amsterdam’s extensive canal system to distribute the goods.  Amsterdam’s Red Light (commercial sex) district is legendary.  Women of all races and body types sit scantily clothed around the clock in special display windows. 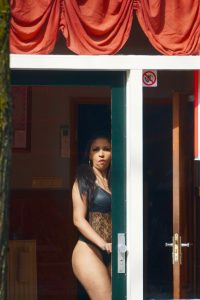 Since the late Sixties, drugs have been tolerated in Amsterdam, making it the only major city in the West where drugs could be consumed publically in large clubs, such as the Fantasia and Paradiso clubs which I visited in the early 70’s while I was a student in Kiel, Germany.  The Dutch government did the logical and practical thing, which was to distinguish legally between “hard” drugs (heroin, cocaine, LSD, etc.)  and “soft” drugs (hashish and marijuana).  These days the pot scene is concentrated in a specific number of designated coffee shops, where hash and grass are sold for immediate consumption on the premises.  It’s supposedly against the law to smoke in public.  However, we witnessed a Dutch policeman forcing a tourist to empty the beer can that he had been drinking on the street.  The policeman told him it was okay to smoke joints on the street, but he should only drink alcohol in the bars.

I look forward to the day when US legal authorities will be similarly reasonable.  However, one difference between Holland and the US states of Colorado, Oregon, Alaska, California, and Nevada, which have legalized recreational marijuana, is that Holland does not allow the large-scale legal commercial cultivation of marijuana, as has been done in the states.  (Cultivation and legal consumption of marijuana is still illegal under federal law.)  It’s amazing to realize that due to citizen’s initiatives which led to legalization in those states listed above, besides having a long tradition of legal prostitution, my home state of Nevada is even more progressive on marijuana than the Dutch!