2018 marks the sixth conference in Jordan of the Middle East Nurses United in Human Caring. The conference was started by nursing pioneer Dr. Jean Watson, together with nurses from Israel and Palestine. Jean, who holds now 12 honorary international doctorates based on her Caritas Nursing Theory, believes that nurses of all nationalities share the common beliefs and practices of promoting healing. Thus she sponsored initiated these conferences through the Watson Caring Science Institute. These educational conferences draw American and other nationalities, including (last year) two nurses from Iran, and this year two nurse researchers from Norway, with others from South Africa and Australia. The conferences are fully educational, presenting papers and studies on issues critical to the middle-east.

This year, the opening evening session was devoted to caring for patients who live in refugee camps. And, the details of finding the ill, tending to them with language barriers, and even delivering babies in the camps.

Reality check: If you are reading this from the comfort of your home, with no threats of bombings or other types of violence, with a bed to sleep in, and clean water to drink with sufficient food, then you are more fortunate than many millions of people in the world.

Many of the nurses either live in or close to conflict zones, or otherwise, they travel into the conflict zones to do their healing work. We heard from Arab and Israeli nurses who treated wounded Iraqis and Syrians, victims of war. We heard from an American first-responder to the earthquake in Haiti, talking about driving through ruined neighborhoods with dead bodies lying around. This American nurse also showed pictures of the refugees from the ninth ward of New Orleans, victims of Hurricane Katrina, thousands of whom were stuffed into the Houston Astrodome with insufficient water, food, toilets, or healthcare, including a lack of psychiatric care. She termed it a clear failure of the US government on the state and federal level.

This conference, besides discussing treating the victims of war, also covered the victims of abuse and exploitation within Arab societies, including the impregnation of 12-year-old girls, the forced pregnancies, the taboos against male/female mixing that inhibit the administration of care. These are empowered women (for the most part). There were a dozen or so male nurses there, mostly Palestinian. The president of the Palestinian nurses’ association attended, who had also been present at previous conferences.

The relationships that have been created at these conferences between Israeli and Palestinian nurses are very important and meaningful. Patients needing certain types of care need to be transported from the West Bank to Hadassah Hospital in Jerusalem. Hadassah nurses express pride at the fact that they treat all patients the same, no matter if they are Jewish, Arab, soldier, or terrorist. For Hadassah nurses, all patients deserve equal care.

Ambulances from the Palestinian territories must pass through extensive Israeli check points due to the unfortunately justified Israeli fear of suicide bombers disguised as healthcare workers. Unfortunately, acute patients have died in transit due to delays in transport due to the time-consuming Israeli inspections.

At a previous conference, we heard of a Palestinian woman who had received treatments in Israel for extensive burns. She returned regularly from the West Bank to Hadassah hospital for follow-up treatments. When traveling to her final treatment and since she was familiar at the border crossing, Palestinian militants was forced to wear a suicide bomb vest, and told that her family would be killed if she did not kill Jews. She could carry out the bombing and revealed the vest to the Israelis. She was not sent back to Palestine, but was prosecuted as a terrorist in Israel. I don’t know if her family was harmed by the militants. But this is the level of hatred that simmers in the occupied territories.

During our recent week in Israel, there was a newspaper report of a “price-tag attack”, which is the name given to Jewish violence against Palestinians. This attack consisted of destroying some Palestinians’ cars and writing “Death to Arabs” as graffiti on buildings. Israeli settlers in the West Bank often destroy the olive trees, and prevent the grazing of livestock by Palestinians on land that was previously theirs but has been seized by settlers. This is the constant pressure by right-wing Israelis to destroy the ability of Palestinians to support themselves and remain in the West Bank occupied territories that the radical Jews say was promised to them by god, and so those Arabs who have lived in the region for many generations should just leave. Where to? They say Jordan. Yet, Jordan already has thousands of Palestinians displaced from Israel by previous wars. Also, Jordan’s three million citizens have been forced to accept over a million Syrian refugees. Most refugees live in a huge camp in Jordan near the Syrian border. Refugees arriving with some money rent lodging or stay with relatives in Amman and compete for jobs with the Jordanians. Thus there is tension in Jordanian society. 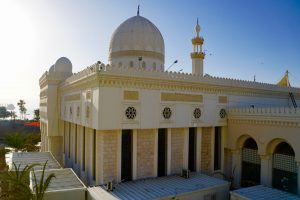 Last year’s conference happened to fall on Mohammed’s birthday, which is celebrated throughout the Arab world. In Amman, Jordan, there was a newspaper report of thousands of Palestinians demonstrating on the Israeli border, calling for a new war to re-take Jerusalem from the Jews. The Jordanian government certainly doesn’t want war with Israel. They could never win, since they lost control of East Jerusalem in the 1967 war. This is the basis for the Palestinians wanting East Jerusalem to be the capital of the proposed Palestinian state. This is why Trump’s rejection of UN resolutions and his proposal to recognize all Jerusalem as the capital of Israel is so dangerous. In violent demonstrations since Trump’s declaration, fifteen Palestinians and one Israeli have been killed. Those deaths are on Trump’s hands. No good can come from his stirring up violence in this region.

One sad aspect of this conference is that it is forced to take place mostly “under the radar.” Palestinians are under tremendous pressure not to “consort with the enemy”, i.e. cooperate with any Israelis on any matter. The general Israeli attitude is, the Palestinians hate us, so don’t encourage them by making conditions better. Thus, the Israeli nurses come to the conference over the Shabbos (Sabbath) days, so that their absence from work is less noticed. The Palestinian nurses cannot advertise their attendance, or else risk threats and backlash from their bitter countrymen.

Israel controls the Palestinian territories, with a complete blockade of Gaza and the West Bank. There has been talk of creating the state of Palestine next to Israel for decades. But Israeli settlers have slowly taken over land from what was supposed to be the Palestinian state. It’s becoming harder to imagine how a separate state could be viable if the Israeli settlements (technically illegal, against UN resolutions, etc.) remain part of Israel. But Israel is hesitant to declare the territories part of Israel, because the Palestinians, if accepted as Israeli citizens, could outvote the Jews due to their higher birth rate. The only other alternative is an apartheid state, with the Palestinians confined to their reservations. Americans did that to the native Americans. China is colonizing Tibet through similar means. Russia seized Crimea from Ukraine in 2014 and says it’s part of Russia now, since it was Russian for many years. Nationalist Jews call the West Bank “Judea and Samaria,” the ancient biblical names for the region, which certainly was the original home to the Jews. Of course, the region was also home to non-Jews, i.e. Christians and Moslems. The Middle East was home to various tribes, religions, and ethnic groups for many centuries.

What must happen for these groups to co-exist in the region again, without hating, oppressing, condemning, and killing each other? A headline in the Jordan Times newspaper sums up the situation succinctly: Palestinians need freedom and independence as much as they need economic support.