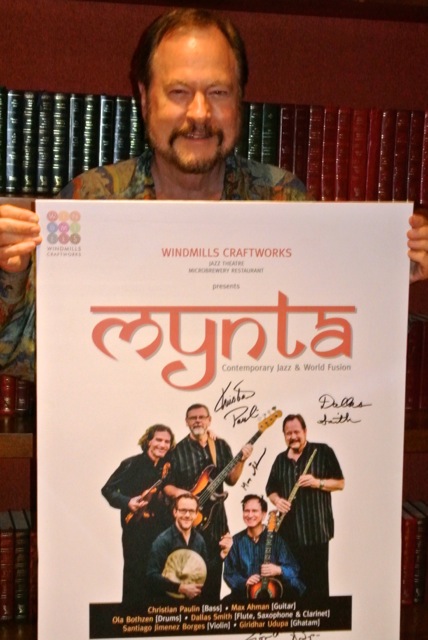 Ah, Mother India…the sensory overwhelm, the chaotic hustle and bustle, the stark contrasts, the warm people, the great food, the beautiful music…This is my twelfth trip to India, i.e. in this lifetime, according to the Hindu way of regarding lives.  Some Hindus might speculate that I must have lived in India in a previous lifetime.  My first visit was in 1971.  The most recent visit was one year ago, the sixth music tour to India with my Swedish fusion music group, Mynta.  This year marks Mynta’s seventh Indian tour.

This was my first time to fly Turkish Airlines to Mumbai (formerly Bombay).  Turkish Airlines has an upgraded “comfort class” in between economy and first class.  For an extra thousand dollars, I was able to sleep relatively comfortably in a seat with much more room than an economy class seat.  This was appreciated in the twelve-hour flight segment from Los Angeles to Istanbul.

Everybody in the world has a unique story to tell.  My seatmate on the twelve-hour flight segment was an interesting and unique guy, a Vietnamese American who spoke five languages and had lived in many countries.  He was returning from his vacation in the states to his job in Kyrgyzstan as the IT manager at the US military base, which functions as a supply base for flights into Afghanistan.  For that job, he needs a high security clearance.  We had interesting talks, in which I learned that he had opened a restaurant in Kyrgyzstan, primarily catering to American soldiers, serving familiar American comfort foods.  However, the business is now failing as the US winds down its military presence in Afghanistan, resulting in fewer soldiers in transit to war frequenting his restaurant.  The US-Kyrgyz base is scheduled to close completely within a year.  Personally, I’m happy to see the US pull back its massive military presence in the Middle East, which seems to only create new enemies against us when we don’t engage in potentially beneficial “nation-building.”

My transit from Reno to Mumbai took almost thirty hours.  But since I managed to sleep quite a bit, I arrived in pretty good shape.  Manish, Mynta’s agent/manager, lives not far from the airport.  I borrowed the use of a fellow passenger’s local phone to call him while I was waiting for my baggage.  Indian airports are chaotic, even in the very early morning.  So it was a relief when Manish pulled up in his car. 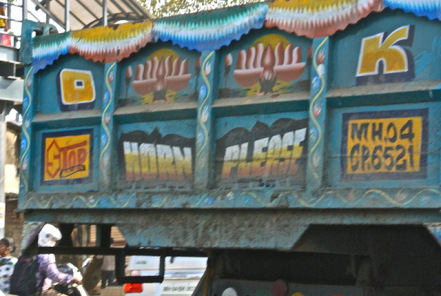 During that first morning, I managed to sleep a couple of hours before lunchtime at Manish’s apartment

.  In the afternoon, I traveled by taxi to my first adventure of the trip, to my friend Dee’s apartment, where Dee had arranged

a jam session with a couple of Japanese musicians, a guitarist and drummer.  Dee plays the bass.  The Japanese musicians had both spent many years in America, so their English was excellent.  The drummer lives in Tokyo and is visiting India for three months in order to study the tabla drums.  The guitarist has a long career as an international teacher.  He’s married to an American, also an international teacher.  He’s been living in Mumbai for a year and a half, and is now considering taking a teaching job in China for two years (the typical professional commitment).  The guys were all excellent musicians, and a great way to start my musical tour.

On my second day in Mumbai, I met and rehearsed with an Indian guitarist that I’d only met previously via email.  The encounter was arranged by Manish.  He had sent me the guitarist’s album, to choose which songs I might play with him, after which we performed in the courtyard of an upscale shopping mall, guitar, bass, and drums, plus me.  The concert was free to the public, and I was able to invite several of my Indian friends to come hear me.

I love Indian food (and food, in general).  However, my food love can be treacherous, because on my third day, I was struck by acute stomach upset, exploding from the top and bottom.  I don’t know exactly what caused the upset to my system.  But I’m tempted to blame the “Japanese” sushi I had at the Global Fusion restaurant.  As someone said, you wouldn’t go to Africa and expect great Indian curry, so why would I expect Japanese sushi to be good in Mumbai?  By the next day, I was well again.  On the evening of that third day, Mynta had been booked to play a big outdoor concert, which unfortunately was cancelled at the last minute.  But considering how I felt that day, I was relieved not to have to perform that evening.

I couldn’t afford to be sick for long, because early on the fourth day we had to get up after a few hours sleep to catch a 3am flight from Mumbai to Bangalore.  The early flight was necessary for us to reach the outdoor festival site for a 7am sound check

, which was necessarily early since the festival would be starting at 11am, and Mynta was not the only group needing to sound-check.  After the sound-check, we were able to check into a luxurious Marriott hotel and sleep all afternoon, prior to our early evening performance.

Every performing musician loves to be on stage and hear the audience applaud enthusiastically.  India is a great ego-booster in this regard, as the audiences are comprised of active listeners who express themselves freely when they like what they are hearing.  For better or worse, the volume of the amplification system has a huge effect on the perception of the music.  At the outdoor festival in Bangalore, Mynta was playing at rock music levels.  During sound-check, when testing my microphone, I asked the engineer to please reduce the “slapback” echo effect I was hearing.  He informed me that he wasn’t adding any effect.  It was simply my loud sound bouncing off the back wall and coming back to my ears a half second later.  Along with the huge sound system, there were strobe lights

and smoke machines, which turned on unexpectedly during our performance.  This may have been the loudest concert I’ve ever played in my life!  Loud music makes audiences scream.

The Bangalore Storm Festival is set up like a mini-Woodstock.  There was a whole area for attendees to camp overnight in tents during the three day festival.  There were three different performance stages with different groups on at least two of the stages at all times.  I actually didn’t like most of the music I heard, because it was too electronic and formulaic.  For example, one stage was dedicated to EDM—Electronic Dance (=trance) Music.  There was a continuous strobing light show, and the music was, again, so loud that one could feel the beats hitting one’s body.  I thought ruefully of the old saying, “If it’s too loud, you’re too old.”

We played a second Bangalore concert the following night (of the fifth day) at a new restaurant-brewpub-music club.  It was a the ultimate hip modern establishment.  For menus, patrons are given IPads.  Orders are placed wirelessly to the kitchen, at which point a waiter would come to the table and confirm the details. The beer brewed onsite was good!  The music equipment was very up-to-date, include an Avid (brand) mixer, which controlled the lights and sound.  I had only seem photos of this expensive Avid product online.  I don’t know anyone in Reno who has one yet.

For this concert in the brewpub, we had a local Bangalore percussionist substituting for Fazal, our tabla player, since Fazal had to return immediately after the Storm Festival to prepare for the annual grand memorial concert to his father, Alla Rakha, who was the tabla accompanist to Ravi Shankar for many years.  The level of musicianship among classically-trained Indian musicians is exceedingly high.  Our guest played the ghatam, a clay pot, which is an unlikely candidate for a musical instrument.  However, the ghatam has been perfected as a musical instrument, and is able to be made in any pitch desired.  Our guest had received download files of our music in advance.  He came into our rehearsal the day of the show totally familiar with the music, such that we could simply play through the tunes with him with very few stops.  We were impressed at how easily he fit into our repertoire, since some of Mynta’s pieces can be complicated (at least that’s how we regard them).