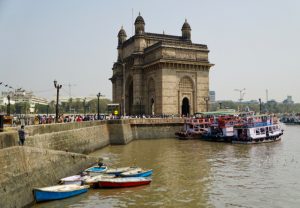 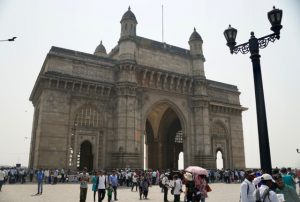 Welcome again to India: Above, two views of the Gateway to India

India assaults the senses and the intellect. The smells, the sounds, the crowds, the traffic, all these constant phenomena reinforce the necessity to live consciously in the moment, just to survive. The assault to the intellect comes when trying to figure out how India manages to function at all, and then to recognize the many fantastic aspects of this country with its rich and varied culture, on track to surpass China as the world’s most populous country. 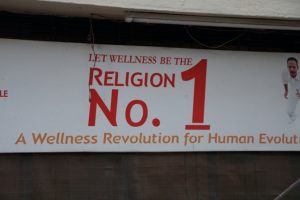 I’ve been riding with Uber taxi service all except just a few times, when the Uber driver couldn’t find me. Several times I had to cancel Uber rides when my patience in waiting for the tardy driver wore off. The online penalty was only sixty rupees=$1 (approx.), after which I simply started over with a different Uber driver, hoping that he would better be able to locate me. Uber is less expensive than regular taxis. The vehicles are in mostly better condition and are uniformly air-conditioned. One of Uber’s most attractive features is that no cash transactions are necessary (which is the source of many disagreeable moments with normal taxis).

For the last couple of nights, riding back to my generous hostesses luxurious apartment in an upscale part of Mumbai, I’ve been counting the number of people sleeping on the street. There’s a long stretch of the taxi journey home which parallels the railroad tracks. Next to the wall bordering the train tracks, many people sleep in little tents, or simply on the sidewalk on thin blankets. They sleep mostly in groups, for collective safety, I’m sure. And so, I counted as best as possible in approximate groups of five as the taxi drove down that stretch. The average count was around 180 people that I counted on one side of the road, during one five minute journey, on one street of this teaming city of over twenty million souls.

One amazing thing I saw really tickled the intellect: In one group of women sleeping out in the open on the sidewalk next to the street, one woman was reading on her cell phone. Imagine, a poor woman sleeping between railroad tracks and a busy street was reading on her phone late at night. I assume many other poor street sleepers have smart phones as well, but they were simply sleeping at this time. Imagine what a difference it means to a person with no other significant possessions to own a smart phone.

I use my Apple iPhone on WiFi, but my international phone plan is too expensive to use it as I would at home. So I bought an Indian SIM card, forgetting that my phone is “locked” and won’t use non-AT&T-approved SIM’s. And then the vendor called back and said that he was not allowed to legally sell to foreigners. (I had already been forced to give him a passport-type photo to buy the SIM.) After a few days, my hostess found a local phone for me to use while I’m here. Finally, I was able to call the list of people that I wanted to touch base with. I realized how isolated I had felt for a couple of days. One thing that is different during this visit is, that unlike previously, Skype now does not allow calls to phones within India. Typical corporate politics no doubt crippled this Skype feature in favor of local phone companies.

Let the music play on…

The timing of my visit this year to India has been fortuitous in terms of my musical engagements. My good friend, Dee, has booked me for performances on six of my total of twelve days here. Rehearsals occurred on evenings leading up to the performances. So the result is that I’ve had some kind of musical event every day here except for my one free day, today February 21, 2017, during which I’m writing this blog. Selecting photos might take more time, but my goal is for my readers to receive this blog while I’m still in India.

I think this is my twelfth visit to India in this lifetime. According to Hindu beliefs, I probably visited many times before in previous lifetimes. I just know that on my first visit to India in 1971, the flute music enchanted me from the very first moment I heard it. Was I “remembering” from a previous life? There are certainly beliefs based on all kinds of religions that seek to explain the human condition…how we feel…why we feel what we feel…what inspires us. It is fun to encounter dancers, or poets, or writers, who feel as passionate about their art forms as I do about music.

The music and arts scene here in Mumbai is extensive. Of course, the Bollywood film industry (the world’s largest in terms of number of productions) attracts many talented people. There is a relatively new (4-5 year old) music school, the True School of Music. I’ve had the pleasure of playing on this visit with three different foreign teachers from the True School, a Cypriot guitarist, a Spanish pianist, and a Nepali-American saxophonist. There were all great musicians, on teaching contracts from six to twelve months. Dee has had many new visiting musicians to jam with since the True School opened.

My buddy Dee has lived in Mumbai for three decades. He supports himself with a variety of gigs, including music performances, instructor at the Film Institute, doing voice-over recordings, etc. He is the manager of a small performance space in Bandra, a desirable suburb of Mumbai. Besides opening the space, called the Bandra Base, to outside artists, Dee performs with local musicians as well as visiting foreign musicians, like myself. As much as possible, he attempts to offer some musical entertainment every night in which an outside group is not mounting a production there. The idea is that a loyal public following will be cultivated, such that at least some people every night will show up, expecting to hear great music. Email blasts promote specific evenings. A nominal admission fee is charged, and the money is split between the performers and Bandra Base. Dee is performing a great service to local musicians by establishing this venue as a musical institution on the scene here. I consider Mumbai to be India’s New York (plus Hollywood/Bollywood), the richest and most concentrated arts community of the country. Thus, three of my six performances this visit took place at Bandra Base. 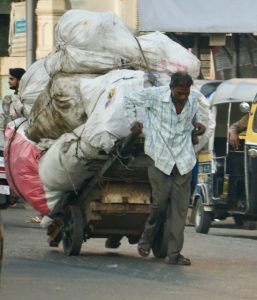 I think of cities as being the incubators of specialized skills. That’s why there is such an extensive music community here compared with a smaller city. The city encompasses an incredible diversity of races, religions, occupations, economic classes, and every other variety of human group that one can imagine. In the West, it can sometimes be difficult to assess a given individual’s class standing or group affiliation, due to the fact that most Westerners wear similar clothing. Not so in India…Traditional Hindu women wear colorful saris. Moslem women wear black clothing, with abaya veils or the tent-like-full-body-covering chador. Farmers and laborers wear distinctive simple clothing, usually very dirty. Moslem and Hindu male pants differ…Moslem “pajama” pants have tapered legs, Hindu pants do not. The dichotomy between older traditional clothing and the younger generation’s jeans and T-shirts is clearly evident. 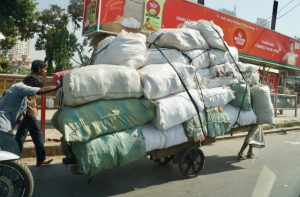 Riding in the taxi down the crowded city streets, it is possible to make a reasonable guess as to the religion, class, and occupation of a large percentage of people one sees on the streets. There are many streets lined with modern businesses, but with rows of stalls in front belonging to the more informal economy, what in the US would be regarded as a “flea market” of diverse street vendors. The growing middle class is served by conventional restaurants and retail shops. For the lower classes, there are the street vendors of all kinds, preparing foods, selling farm produce, and providing services, from barbers to dentists to tailors. Many poor street vendors “live” right behind the locations from which they offer their services during the day.

India is a grand demonstration of the diverse possibilities for surviving under free capitalism. There seems to be no limit to the variety of ways that people devise to support themselves. They are driven by sheer necessity and the survival instinct. There is no government welfare to fall back on. People are forced to subsist on very little in terms of money and food. I reflect on the fact that I typically carry more money in my wallet than a poor Indian manual laborer might earn in a year.

The main difference between myself and most of the people I observe on the streets is this: I can leave. I’m just a visitor. They can’t leave. This is their life. There’s nowhere else for them to go. They are stuck in this economy. There is no escape.

Mumbai’s Dharavi slum is one of the biggest slum areas in the world. It covers over five hundred acres and houses perhaps as many as a million people. (No precise count is possible.) The population density within Dharavi is among the highest of any place in the world. Although sanitary conditions are appalling, people manage to live, work, and form their own societal groups, based on religious compatibility or other affinities.

Though some might argue that the cliché is outdated or not longer applicable, the US remains a “melting pot” in which people from different parts of the world come together and adapt, to become more like the people around them, in terms of clothing, speech, and behaviors. By contrast in India, it’s amazing to me how distinct and separated the different groups remain, despite living in such close proximity to each other.

Meanwhile, within site of the slums, indeed, towering over the slums are tremendous new skyscraper buildings, newly completed and under construction. What concerns and mystifies me is how developers can amass the large capital necessary for towering skyscrapers, yet the government does not have the resources to upgrade public services. Apparently, the rich do not pay enough taxes for services to “trickle down” to the poor. And so, the rich might live in luxurious gated residences. Yet, when they leave their refuges, the roads are choked with traffic. There is no place to park. And the grounds of the skyscrapers often provide open land for new arrivals from the villages to become “squatters” and establish new slums. Rich and poor, co-existing side by side. 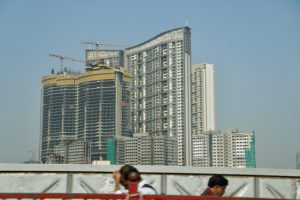 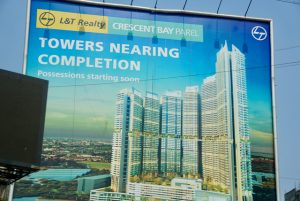 Modern India demonstrates the results of a political system in which the government is relatively weak compared with the large multi-national corporations. Large corporations can afford to build huge buildings, while their executives are transported in chauffer-driven limousines to their high-rise multi-million dollar apartments. Meanwhile, millions of poor people, many illiterate, subsist through grueling manual labor jobs. There is little protection of the environment from corporate pollution. Many people do not have access to clean water, much less decent housing with electricity and plumbing. Public utilities are overwhelmed by the ever-increasing population of poor people.

A comparable trend seems to be the goal of President Trump and the Republican Congress. By crippling the established public programs, policies, and protections that were decades in the making, such as the Environmental Protection Agency and the Department of Education, much harm is done under the goals of shrinking government influence on businesses and lowering taxes. Corporations might raise their profits in the short term, but the people (and the corporations) will suffer in the long term. 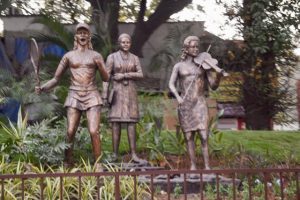 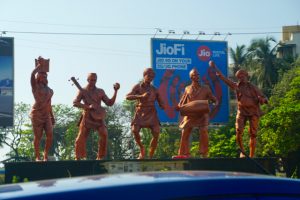 Above, music celebrated through public art at roadway intersections. 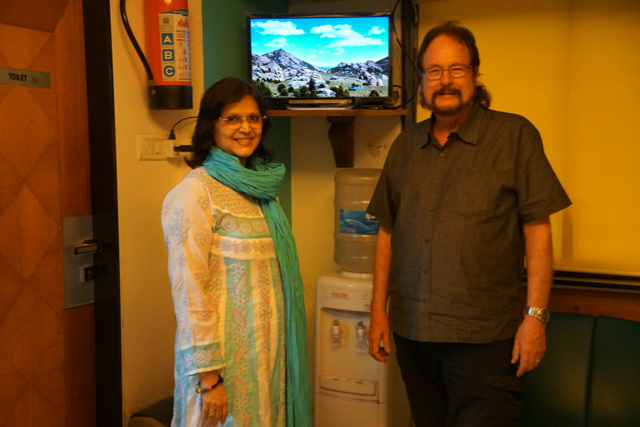