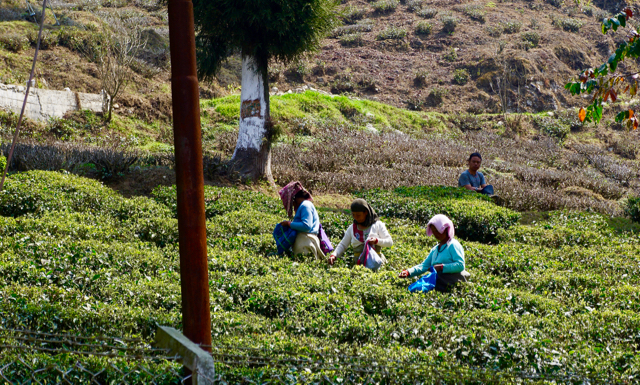 Darjeeling is located near the northern border of the Indian state of West Bengal, of which Calcutta (Kolkata) is the major city. It lies at around seven thousand feet (2,200 meters), on a terrain of steep hills, similar to the terrains of Sikkim and Bhutan, which served to isolate those two ancient kingdoms from the British colonizers. Unlike Sikkim and Bhutan, Darjeeling was ruled by the British as part of colonial India. British merchants would come up to Darjeeling’s hills to escape the oppressive summer heat of Calcutta. The weather in March is still quite cool, due to the high elevation.

Unfortunately, there is a thick layer of haze that seems to blanket the whole region from Bhutan on down over these Himalayan foothills. We arose at 3:30 am one morning in order for our tour guide to drive us to the top of a close-by ridge to see the sunrise. As the sun rose through the layer of low haze, we could see several Himalayan peaks many miles away, including the third highest mountain in the world, Mt. Kanchenjunga. But during most of the day, the haze obscured the view of the Himalayas.

Darjeeling is famous for its tea. Probably everybody in the world has tasted Darjeeling tea. The British introduced commercial tea cultivation, and so one can say that, along with introducing English as a unifying language and building Asia’s largest railway system, establishing the tea industry was one of the major benefits to India of the British colonial period. The steep hills around Darjeeling, when they are cultivated at all, are covered in fields of tea bushes. We were told that tea harvesters (mostly women) earn around $2.50/day, a pitifully low wage. They receive rudimentary housing and subsidized food from the tea companies. Their status is analogous to that of Mexican farm laborers in the US who do the jobs that ordinary Americans would never do, just like the average Indians wouldn’t harvest tea leaves. It’s back-breaking work.

We visited a special tea-tasting room. There we were served “white tea”, which is brewed from the first sparse young tender tea leaves, “first flush”, the first main harvest, followed by “second flush” and “autumn flush.” The tea gets stronger and more bitter as the leaves mature through the season. The tea was served plain, without milk, sugar, or spices. The interesting thing is that though “white tea” is the most expensive of the teas offered, we didn’t like it. It was too weak for our taste habits, which tend to prefer stronger brew. Our hosts explained that we were probably used to drinking tea from the Indian state of Assam, whose tea is grown at a lower elevation than Darjeeling. Assam’s tea is very strong and thus demands the addition of milk, sugar, and spices. It’s also less expensive than Darjeeling tea. Our uneducated tea palettes reminded me of wine tasting. It’s quite possible, even typical, that an uneducated wine taster might prefer the taste of a simple inexpensive wine compared with the taste of a more complex expensive wine.

Another highlight of our Darjeeling visit was the “toy train,” the antique narrow gauge Darjeeling Himalayan Railway which has been named a World Heritage Monument. We took a short tourist trip, powered by an antique coal-powered steam engine. The fumes from the steam engine were terrible. The line, which originally linked Darjeeling with Calcutta, still runs from the hills of Darjeeling southward to the town of Siliguri, in India’s flatlands about two hundred kilometers away. That train trip takes eight hours, but by car it only takes three hours.

Turn up your sound and watch the 21 second video of the Darjeeling Railroad steam engine:

Leaving the high Himalayan foothills of Darjeeling, we drove on the road, which parallels the narrow-gauge train tracks for most of the way. The nearest airport, which serves Darjeeling, Sikkim, and much of the northeast Indian region, is the town of Bagdogra. The airport code is IXB (why?). It was our third transit through the Bagdogra airport. We had first flown into Bagdogra from Delhi, then again after a week in Bhutan in transit to Sikkim, and finally after Darjeeling out of Bagdogra to Mumbai.

This region of India around Bagdogra and the nearby larger town of Siliguri has no obvious tourist attractions. Yet thousands of Indians live their whole lives here, with their only contact with the larger world being through television, movies, and the internet. Their lives might have been more peaceful prior to the introduction of these new culturally disruptive technologies.