Pergoman is an Acropolis, the Greek word for the upper city.  Just as the Athens, Greece, Acropolis consists of grand columned structures overlooking the valley below, the Pergamon Acropolis does the same.  Pergoman is famous for one of mankind’s most pervasive and important inventions:  the codex, that is, the design of modern books which consists of equally sized pages glued or sewn together on one side, allowing the reader to read by turning from one page to the next.

Previous to this invention, the standard “paper” product was in the form of scrolls of papyrus from Egypt.  Papyrus paper was expensive and rare.   In Pergamon’s grand expression of creativity that revolutionize reading and record storage for the whole world, young lamb or goat skin was cleaned, washed and stretched until it dried into flexible opaque durable sheets.  The skins were trimmed to a uniform size and then the “pages” were woven together into the first “books”.  The word for parchment in German is Pergament, derived from the city’s name.  It is ironic that this invention of the design of the modern book, dating several hundred years BCE, should now be rendered passé by digital e-readers, such as the IPad, the Kindle, and the Nook.  In digital readers, the concept of pages is passé.

The architecture of Pergamon has mostly deteriorated into rubble, because of numerous earthquakes and the ravages of time and the elements.  It was once home to one of the world’s great libraries, competing with Alexandria and Byzantium.  The theater survives mostly intact.  Every Greek city ruin that we have visited, except for Troy, has had a theater.  Some of them, such as at

Ephasus could accommodate gladiatorial battles.  Others were set up strictly for concerts and theater performances.  We saw a sculpted relief of a woman playing a harp in the surviving ruins.  The one characteristic that all the Greek theaters share is an intentionally designed angle of thirty degrees, which is the angle that the Greeks discovered was ideal for the conduction of sound from the lower stage all the way up to the upper seats.

One more interesting fact is the difference between Greek and Roman structures.  The Greeks had discovered and perfected the arch as the strongest type of structure possible.  The Romans continued using the arch in their temples and aqueducts.  The Greeks did not have any cement, and so all of their great structures required precise cutting of the building blocks so that they could fit together perfectly.  The Romans discovered that by mixing volcanic ash with lime and adding water, they could stick any two building blocks together.  This enabled the Romans to build structures even bigger and grander than those of the Greeks.

And now to discuss something completely different…FOOD! 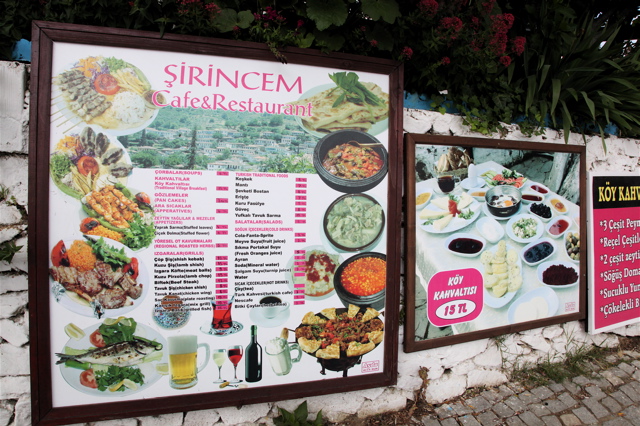 We have visited other famous ruins, but I want to discuss a subject that everyone can relate to:  food.  Turkish food is great!  Susan has had no trouble as a vegan.  Vegetables are varied and plentiful. 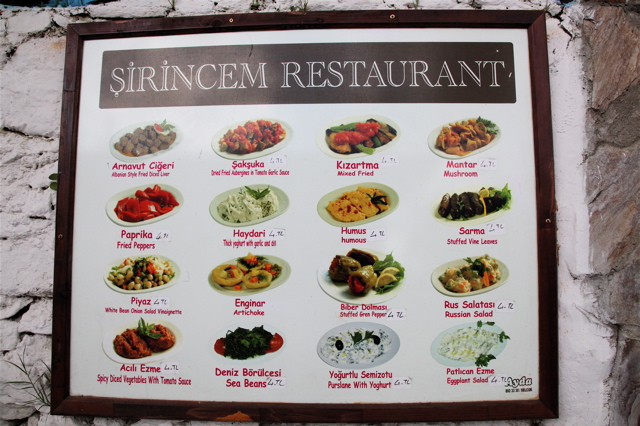 There are more types of salads available than I’ve seen in any other country.  Meats and fish are plentiful as well, though because the Turks are Muslim, they don’t raise or consume pork.  Turkish coffee is famous…it’s like thick unfiltered coffee with a layer of mud in the bottom…definitely only for hardcore coffee lovers.  The tea is robust.  And the sweets are varied.  Turks use honey in many of them.  We had the best baklava that we’ve ever eaten.

The context for Turkey’s great food is the most fertile agricultural land I’ve ever seen.  This South-western coastal region is the richest part of the country.  Fig trees seem to grow wild.  Olive trees cover all the areas that aren’t otherwise cultivated.  There are groves of pomegranates, peaches, apricots, cherries, and nut trees.  Strawberries are in season just now.  In my experience, fertile coastal regions are always more relaxed and cosmopolitan than the sparser mountain regions.  Except for the minarets visible in every town, one wouldn’t know that this was a Moslem country.  Village women may wear colorful head scarves, but in doing so, they look just like the stereotypical Eastern-European peasant women, who are not Moslem.

Let’s talk olives:  There are (according to our tour guide) 85 different varieties of Turkish olives.  Some of them are not commercially cultivated…they just grow wild.  Thus, olives and olive oil can vary widely in taste. Every hotel buffet has at least half a dozen different types of fresh olives.  This is the only place that I’ve tasted olives where the oil in which the olives were cured tasted so good that I wanted to sop up every drop with a piece of bread.

For any of you who have never tasted really excellent olive oil, look for the best you can find and have a new experience.  When Susan and I traveled to Italy seven years ago, we tasted some olive oil that was so good, that I felt like I had a revelation as to the popularity of the Mediterranean diet.  At that point, Susan and I swore to each other that we would never again use cheap olive oil for our salads and raw consumption.  Good olive oil can be quite expensive.  It’s okay to use cheap olive oil for cooking.  Cooking breaks down the oil in any case. 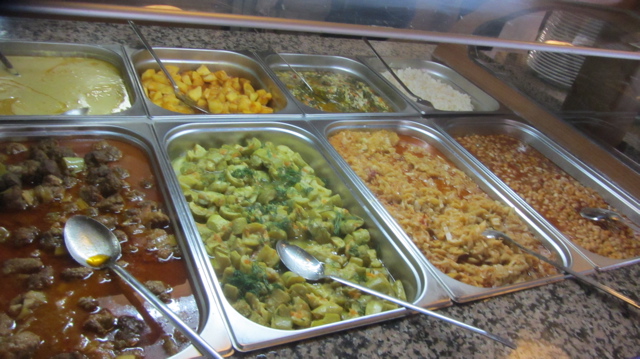 Buffets lunches and dinners seem to be the common denominator in both Istanbul and the small towns.  The rural gas stations, with variety shops, and restaurants all offered buffets.  Only in one small town did our guide caution us not to eat the raw vegetables, due to passengers on previous tours having gotten sick from eating them. 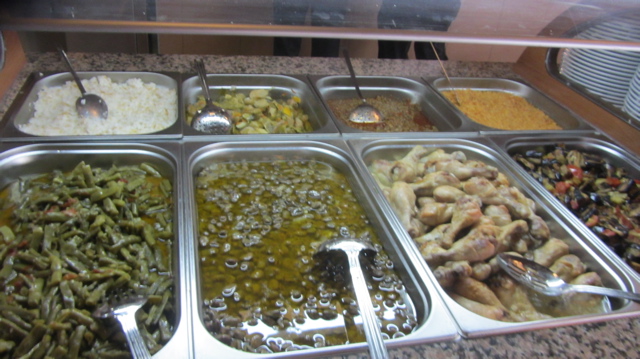 Hygiene has been generally excellent in all the hotels.  Though we are cautioned not to drink the tap water, no one has gotten sick (yet) from eating the salads.  One dares not eat salads practically anywhere in India, even in the five-star hotels, due to the questionable wash water used to prepare the raw vegetables.

Dried fruits are one of Turkey’s famous exports.  Dried Turkish apricots are available at our local Reno Costco.  Turkish dried figs are also famous.  Both are offered at breakfast buffets, but the dried fruit is definitely fresher and moister than anything available in the states.  This is certainly to be expected.  It just means that I won’t eat those exports once I’m home again, since they will be older and drier than what I am used to eating since being here.

There are several Greek-feta-types of white cheese. Some are served with different herbs sprinkled on them and soaked in olive oil.  Turks like European-style bread.  My memory from my early travels is that once one travels east from Turkey, only flat bread of different types, i.e. nan, pita, etc. are available.

Despite being a Moslem country, beer and wine are available everywhere.  So far, I haven’t tasted any Turkish wine that’s likely to be served at next year’s Wine Spectator tasting festival.

Below are photos of an Istanbul taffy-puller in action.