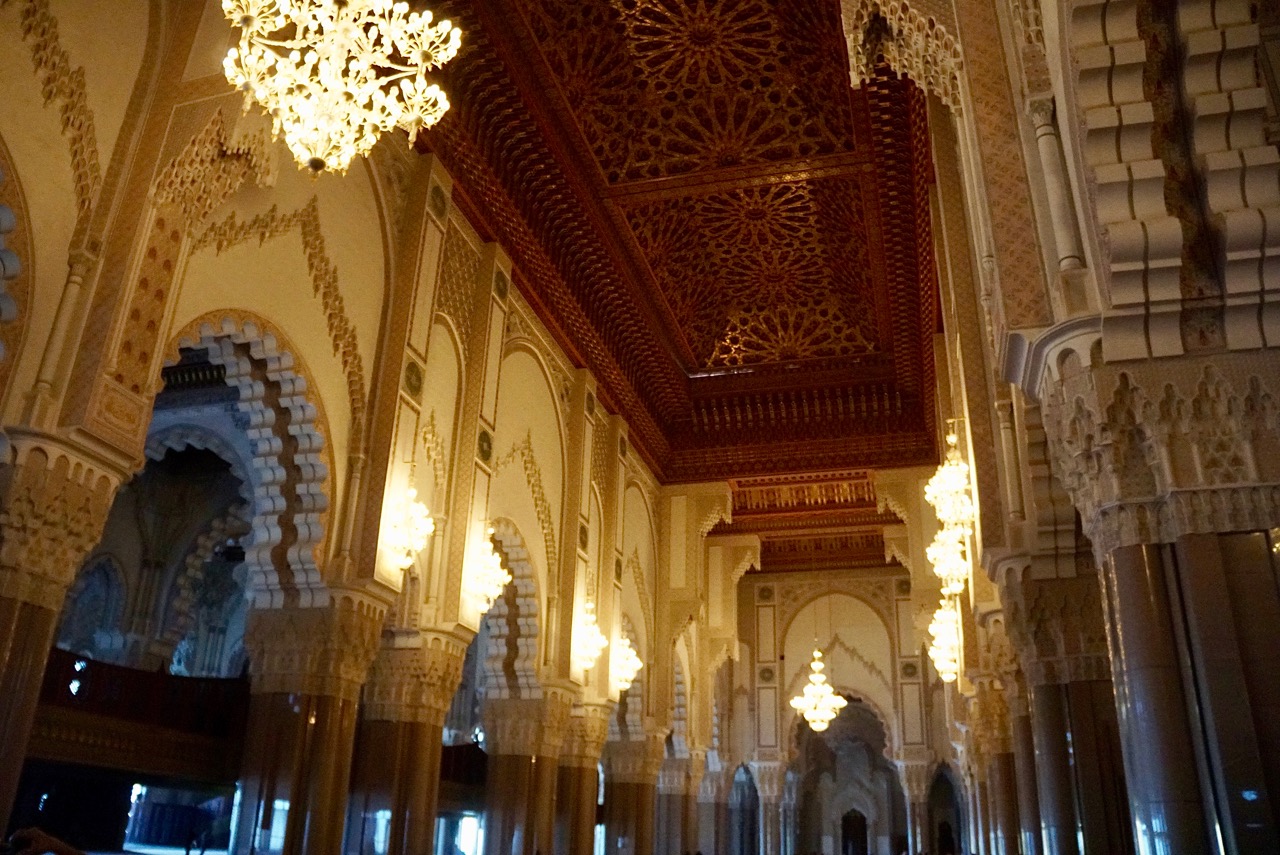 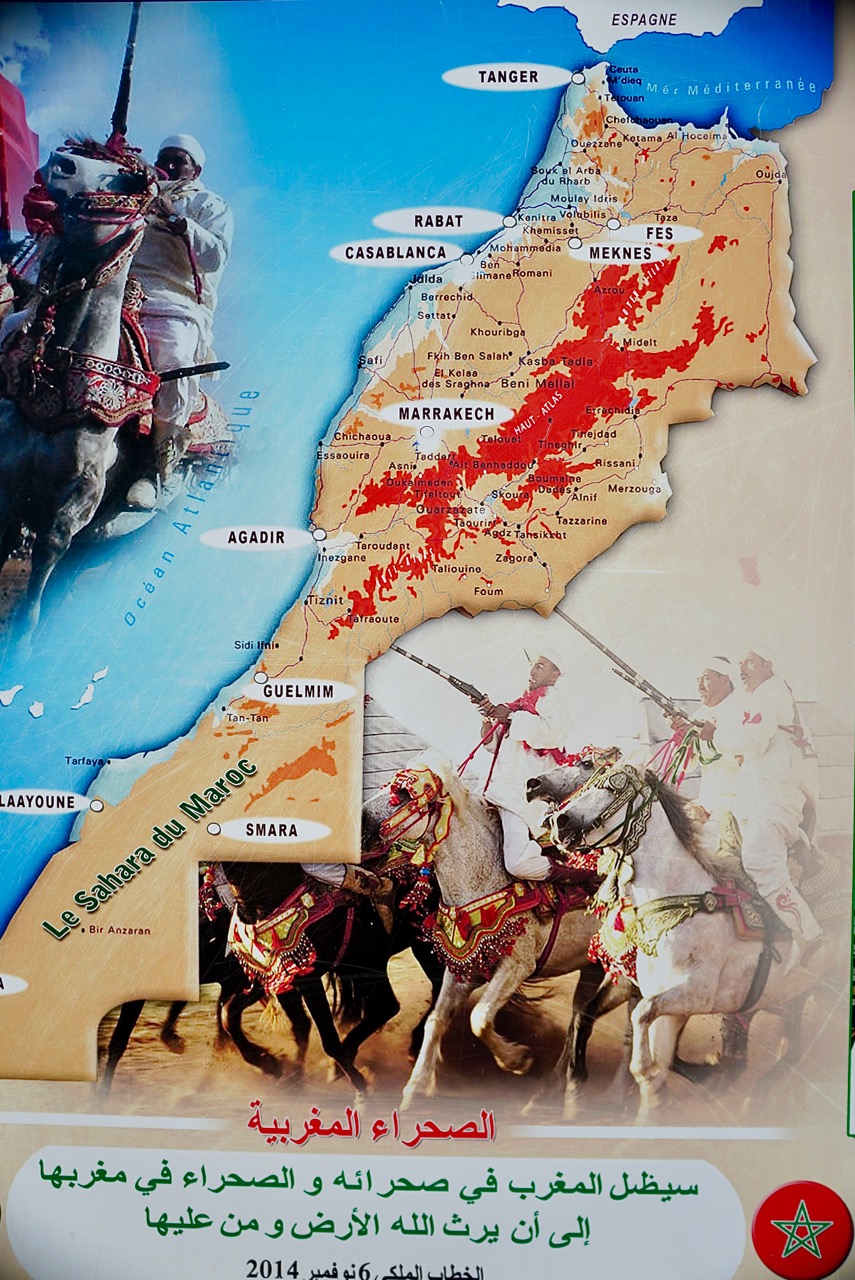 I must confess prior practically total ignorance of Morocco. Whatever I thought I knew was wrong. Similar to my mistaken preconceptions of southern Spain, I thought that Morocco was all desert. Instead, it turns out that the northern half of Morocco is equally lush and verdant as southern Spain. Instead of looking like Nevada, it looks more like Nebraska with wheat fields and olive trees, bounded by the Rif and Atlas mountain ranges, which look like the Sierra Nevada mountains of California and Nevada. It’s true that southern Morocco contains the beginning of the greatest desert in the world, the Sahara. Many desert movies, such as Lawrence of Arabia, have been filmed in southern Morocco. But our tour didn’t take us far enough south to see those desert landscapes.

Our tour of Morocco has taken us to the cities of Tangier (opposite Gibraltar on the mouth of the Mediterranean), Chefchauen (the “blue city”), Fez (the oldest city with the largest historic market), Rabat (the current capitol), Casablanca (Morocco’s biggest city and largest port), and Marrakech (our favorite of all, memorialized in the song by Crosby, Stills, & Nash). It’s a whirlwind tour but with all logistics arranged by the Go Ahead tour company, this is the most efficient way to see as much as possible of the country in just one week.

Here is a quick history of Morocco, just for context to my brief tourist impressions to follow:

Over 2500 years ago, the ancient Phoenicians invaded northern Africa, followed by the Romans over 2000 years ago. In the 8th century, the Moors (the original Islamic Arabs) occupied North Africa, extending their conquests into the Iberian peninsula (current Spain and Portugal), until they were expelled by the Spanish between the 13th and 15th centuries. The Jews of Iberia were expelled along with the Moors. Thus Morocco had a large Jewish population from the 15th through till the middle of the 20th century.

Morocco was ruled by both Berber and Arab kings from the Middle Ages until the beginning of the 20th century. In 1912, Morocco was weak and was divided into protectorates ruled by Spain and France. In the 1930’s a nationalist movement emerged seeking full Moroccan independence. Moroccan soldiers aided the Allies in World War II. Full independence came in 1956 as France faced revolts in Algeria and other former French territories.

The architecture of Morocco reflects Arabic, Spanish, and Jewish influences. Traditional Arab homes have no windows facing out, but rather have interior windows facing an inner courtyard. Spanish and Jewish structures did not have inner courtyards, but rather had windows facing out to the streets, sometimes with balconies. These different architectural styles are seen in the historic neighborhoods surrounding the traditional market areas. The mix is called Islamo-Iberian or Iberian-Magrebi styles.

In the Middle East, Islamic mosques have round minarets, numbering four or more. In Morocco, mosques have only one minaret, which is square, usually with a smaller tapered section at the top. Every village and urban neighborhood has a mosque, visible from its minaret. Every major city that we visited has a major mosque, many of them hundreds of years old. But the country’s grandest mosque located in Casablanca is the world’s third largest (after the two largest mosques in Saudi Arabia). It is new, completed in 1996 at a cost of approximately $800 million dollars. The interior can accommodate twenty-five thousand worshippers. Another eighty thousand worshippers can pray in the courtyard surrounding the mosque. Non-Moslems are forbidden from entering almost all mosques in Morocco. But the large Casablanca mosque is open to tours by non-Moslems, as explained by our local guide “to show the world what Moslems are capable of achieving.” I can attest personally to being impressed that the Casablanca mosque is one of the grandest buildings I’ve ever seen.

Morocco has lots of new construction. It had occurred to me that the shopping malls reminded me of the glitzy malls of Dubai. This impression was confirmed with I learned that construction firms from Dubai are developing upscale malls and apartment buildings along the Atlantic coast in Morocco’s capital city of Rabat. The country makes a very progressive overall impression. There were only a few beggars to be seen in the markets, usually old people or women carrying babies to general sympathy, who made the impression of being “professional” beggars, similar to those encountered in India.

We were told that forty percent of Moroccans work in agriculture (as compared with 2-3 percent of Americans). Agricultural exports include oranges and other fruits, olives and olive oil, nuts, leather goods, etc. Mining is an important industry (primarily phosphates). But tourism is Morocco’s largest industry. Our tour bus of Americans shared the sites with groups from Germany, Israel, Spain, China, and Korea. (These were only the nationalities I noticed. There were probably other groups as well.)

Morocco succeeds as an attractive tourist destination because there is a rich selection of historic places to visit, prices are low (half the price of Spain in many instances), and the people are generally friendly and respectful. We were harassed by aggressive souvenir hawkers in only a few of the main tourist areas. For those tourists seeking bargains to buy during their visits, quality products are plentiful. Morocco makes a “third world” impression because of its lack of a large manufacturing sector and its intricate and varied handicrafts (e.g. carpets, ceramics, carvings, clothing, and jewelry), which are the types of products made in countries lacking industrial jobs, and where traditional arts and crafts still thrive.

The major cities have an historic core surrounded by newer modern neighborhoods, where our hotels were usually located. The “medinas” feel like one is stepping back a couple of centuries (or more). They are a maze of narrow alleyways, in which a stranger could quickly become totally lost. Our Moroccan guide explained that in the hot summer months, the narrow shaded passageways offer an escape from the heat. Different parts of the medina feature collections of different specialties, like silver-workers, tailors, leather-workers, butchers, farmers, etc. Bargaining is obligatory.

We found Moroccan food to be tastier than the generally bland Portuguese and Spanish food. But it was not really “spicy” as compared with Indian or Thai cuisine. One of the biggest treats was fresh orange juice served in large pitchers at the hotel breakfast buffets. The bread selection was varied and excellent. (Why do so many countries have better bread than the US?) The couscous dishes were too bland for my taste. The tagines (stews) were my favorite national dish, served at every restaurant. A wide variety of fish were available in the coastal cities of Tangier, Rabat, and Casablanca.

One of the best evenings was an outing to a traditional restaurant in the Fez medina (ancient city center and market area). We were treated to a meal featuring “pastillas”, a dumpling-styles dish filled with chicken and plumbs, a sweet dish. Traditional Moroccan musicians played throughout dinner. Then we were entertained by several belly dancers, a musician, and finally, by my opportunity to jam (on flute) with the musicians. It was a spontaneous performance. The musicians made musical room for me within their traditional music. The crowd loved it, and I loved it. The easy portability of the flute allows me to use it for musical and personal connections in most of my travels. In this case, none of the musicians spoke English, so music was our common language.

Finally, I know that many friends as well as some blog readers are wondering whether there is fundamentalist Muslim activity in Morocco. The short answer is no. There are several factors that make Morocco one of the best countries for tourists like us. First, Morocco has a history of multi-culturalism, from the original Berbers, through occupation by the Romans, rule by the Moors, accepting Jews exiled by the Spanish and Portuguese, colonization by Spaniards, Portuguese, and most recently the French. Most Moroccans speak Arabic and French, with many speaking Spanish as well. Of course, the influx of millions of tourists every year means that more Moroccans are learning English as well.

There is significant Muslim fundamentalism in Algeria, Tunisia, and Libya, the North African countries to the east. But due to previous terrorist infiltration from Algeria, the border between Morocco and Algeria has been closed since 1994. One can fly from Algeria to Morocco, but not travel by land between the countries. Divided families and communities in both countries are pressing to have the land border crossings open again, but the timetable is uncertain.

Our guide told us about a government agency similar to our FBI, which is vigilant to oppose and expel any fundamentalists who might seek to spread ISIS ideology to the moderate Moroccan Muslims. Personally, I can attest to the fact that no one in our group ever experienced any aggression or antagonism from the Moroccan Muslims. People in the markets were generally polite and open to everyone.

I would compare Morocco with Indonesia, as two Muslim-majority countries whose religion is not a barrier to the acceptance of non-Muslim visitors. I can heartily recommend Morocco as a great tourist destination.