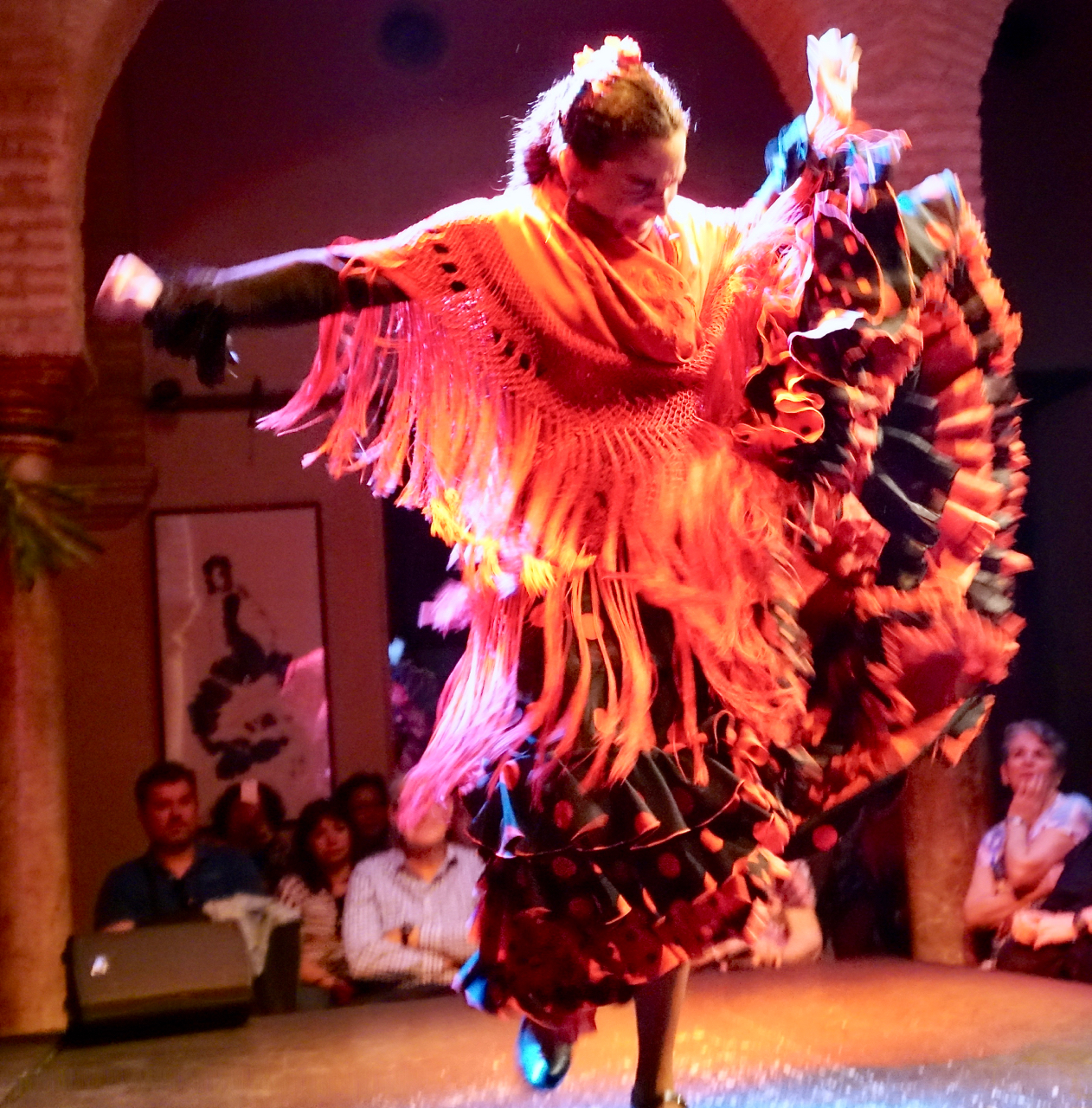 To tour a country as part of a group tour necessarily results in a superficial introduction to the countries visited. But the advantage is that all the logistical details are covered in advance by the tour company. In the case of this Go Ahead tour, we spent two days in Portugal, followed by five days in Spain, to be followed by a week in Morocco. At the end of the week in Morocco, we will fly to Madrid for two nights and one day of sightseeing before returning to Reno.

As we complete our days in Spain, I can only give my superficial first impressions of cities containing UNESCO-recognized world cultural heritage sites dating back a thousand years or more. Our excellent tour leader is very knowledgeable about the history of the various cities. But the many historical details are overwhelming my memory, so this blog will basically relate my overall impressions of the visit.

The three main cities that we visited in Southern Spain were Seville, Cordoba, and Grenada. These previously abstract names will be forever etched in my memory based on the distinct historical sites in each of these cities.

For no good reason, I had assumed the southern Spanish landscape to be similar to Mexico, i.e. a relatively barren dry desert. Thus, I was pleasantly surprised to find southern Spain to be fertile, lush, and fully dedicated to agriculture. The primary agricultural product is olive oil, harvested from literally millions of olive trees. Olives are frequently served automatically as the first hors de oeuvre placed on the table prior to ordering one’s food and drinks. Every city has its local olive oil, which is present on the table for consumption with salads, breads, etc. Thus, while Portugal’s national tree is the cork tree (making Portugal the world’s largest cork producer), Spain is the world’s number one olive oil producer, ahead of Italy, Greece, and Turkey. After having the great olive oils served here, my earlier decision was reinforced, never again in this life to buy or consume cheap olive oil.

In a conversation with our guide, I remarked that in Spain there are very few “single-family” isolated homes in the countryside, compared with the US. I asked if this was by law. Our guide replied that, “No, people are free to live anywhere they want, but Spanish people want to live in villages so that they are close to the bars.” Thus, one sees rolling hills with thousands of olive trees, or fields tilled for spring planting or already covered with green vegetation. One remarkable thing is that there are no fences! Our guide explained that fields are managed as part of village cooperatives, and that individual owners are compensated according to how much land they donate for cooperative use. This is similar to the wine-cooperatives that we learned about in Portugal.

One other aspect of travel in Spain and Portugal is that there are no commercial billboards along the roads. (Hawaii is the only state in the US that bans billboards.) The result is a clear view of the landscapes and villages. The small villages were often built around an ancient castle or fortress built on the highest hill. Similar villages, reflecting that historical desire for collective safety, are found throughout Europe, and especially in Italy. In asking about the various isolated fortresses that we passed on our journey, our guide explained that some were built by the Moors, others by the Christians, and some were built to defend Spain and Portugal from each other.

Seville is not a large city. It maintains a number of historic buildings that were constructed for the 1929 World’s Fair. The impressive building built by the Spanish government for that world’s fair was featured in one of the Star Wars movies as an exotic location. (I must look for that movie scene after having been there.) The courtyard is bounded by artistic tile representations of the seventeen distinct regions of Spain (which also includes the Canary Islands and Majorca). Ornamental tiles, an Arab contribution to Iberian culture, have been raised to an incredible art form, as a durable building material that lasts for centuries.

This part of Spain was ruled by King Ferdinand and Queen Isabella, who were very important figures in the history of Spain and the oceanic explorations of their time. Seville is home to the third largest domed cathedral in the world, after the Vatican and St. Peters Cathedral in London. Its cathedral is famous for containing the partial remains of Christopher Columbus. (This has been verified via DNA testing comparing his genome with known descendants.) Other parts of Columbus’s body are located in Havana, Cuba, and Santo Dominico in the Dominican Republic, though these remains have not been DNA verified.

One treat of our visit in Seville was a traditional Flamenco dance/music performance. Flamenco is an art form borne of Spanish Gypsy culture. Though there were many Flamenco shows advertised in the tourist areas, we were lucky to attend a performance at the world’s only official Flamenco museum and school. We had no time to attend the museum. But the small theater sells out two shows per day.

There were two dancers (male and female), a female singer, and a guitarist. The dancers were dynamic and passionate in affect, changing costumes between every number. The percussive footwork reminded me of Indian Kathak dance. In between the dance numbers, the singer and the guitarist each took solos. Our guide said that though she could recognize some words sung by the singer, but that even as a native Spanish speaker, she could not understand all the lyrics. The guitarist was excellent, at a comparable skill level of Spain’s most famous guitarist, the late Paco de Lucia. And so, similarly to American jazz, Jamaican reggae, and Argentine tangos, Spanish Flamenco is a musical art form that is recognized and respected around the world as a unique cultural expression. 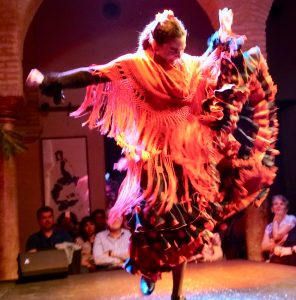 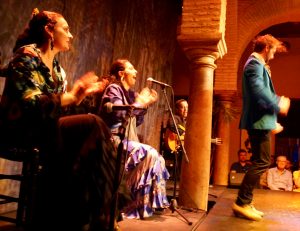 In all my travels, and in every city on this and previous tours, we visited the local cathedrals. Our English tour guide on our Italy tour called it “ABC”, another bloody cathedral, referring to the obligatory cathedral tours. Cordoba was different. It’s cathedral is a unique blend of Arab and Christian elements. King Ferdinand had the foresight to recognize that the Islamic mosque (the origin of the Cordoba cathedral) was an architectural treasure to be preserved, as opposed to the usual practice of the conquering power (whether Christian or Islamic) destroying the religious symbols and buildings of the conquered culture. Thus, the Cordoba cathedral combines elements of both conquering religions, Islam and Christianity. 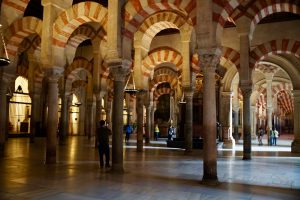 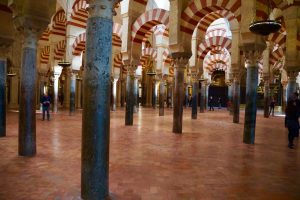 The Cordoba cathedral is immense, covering an area of six acres, originally supported by over a thousand internal columns, of which approximately 850 remain. This inside area could originally accommodate around thirty-two thousand Islamic worshippers, expanded to over forty thousand if the outer courtyard were included. Different parts of the cathedral reflect different historical periods, including private chapels for royalty and rich nobles. The oldest columns in the cathedral date from the Roman period, over two thousand years old.

Surrounding the cathedral is the old city, a neighborhood of old buildings and narrow alleyways. There is even an historical Jewish quarter. But the Jewish religious symbols were never incorporated into the main cathedral, as the Jews worshiped in a separate synagogue.

The original city was surrounded by a high protective wall, most of which has been removed. One impressive remnant, which is well preserved, is the city gates at the ends of the two thousand year old Roman bridge. The bridge, now limited to pedestrians, was constructed amazingly well. It looks like it could last for another two thousand years. Are there any modern American structures that we assume might endure for two thousand years?

Grenada was the last Moorish area to fall to the Christians in the late 1400’s, as opposed to the rest of Spain, from which the Moors had been expelled during the previous two hundred years. Grenada’s most famous structure is the Alhambra, the palace of the Moorish Sultan of Grenada. It is one of the most ornate Islamic historic buildings in the world. Luckily for present generations, the Sultan decided not to defend the Alhambra in what he judged would be a losing battle. He generously turned over the keys to the conquering forces of King Ferdinand, thus allowing the Alhambra to be preserved unscathed for future generations.

The Alhambra is constructed and ornamented completely in Arabic style. There are flowing fountains in practically every room, with the water flowing throughout the building, providing cool humidity and enabling the extensive toilet/sewage system. When King Ferdinand and the Christians occupied the Alhambra, they made minimal changes, because the décor was so intricate and complete, that any major change could only diminish the overall design.

The Alhambra grounds contain extensive gardens, having a variety of trees, flowers, and vegetables. The gardens were as skillfully irrigated just as the palace was. Cannons were present to discourage any would-be attackers, as well as the barrier of the formidable walls protecting the palace and its gardens.

Grenada is one of the two main destination cities for foreigners coming to Spain to study Spanish. (The other is the old university town of Salamanca, which we visited on our trip three months ago.) Because Grenada is located next to the Sierra Nevada mountains, it is possible to ski in the morning and then drive an hour south to swim in the Mediterranean in the afternoon.

Before taking the ferry to Tangier, Morocco, our final tourist destination was the English enclave of Gibraltar. Gibraltar has been part of the United Kingdom since 1805 when English navy general Trafalgar defeated the navy of Napoleon. In the ensuing peace treaty, Gibraltar was taken from Spain to remain an English possession “until they should choose to give it back.” (= never) Spain’s dictator General Franco cut off land access to Gibraltar for forty years, during which time the only way to visit or leave the colony was to fly to and from London.

Before Gibraltar was Spanish, the first colonizers were the Moors. The Sultan of that time had pet monkeys, which have since multiplied and are Europe’s only wild monkeys. Winston Churchhill said that when the monkeys leave Gibraltar, that the English will leave as well. So everyone feeds the monkeys in order for them to survive. The 32,000 registered voters of Gibraltar voted against Brexit to stay in the EU. Nonetheless, we had to show our passports to enter Gibraltar, since for just a few hours we were leaving the EU.

Gibraltar is technically a British military base, currently home to six thousand British troops stationed there permanently. In the event of military crisis or necessity, the military could choose to close the road and again isolate the colony’s inhabitants. Tourism is a luxury of peaceful times. The naval base receives visits from American warships on a regular basis. The rock of Gibraltar is like a Swiss cheese of tunnels dug first during World War II. It is covered in radar sensors. It is not possible for refugees from Africa or anywhere else to land a boat on the colony. Once again, we were given a history lesson about the recurring wars in this part of Europe. The best thing about our visit is that we were able to feast on traditional English fish and chips.